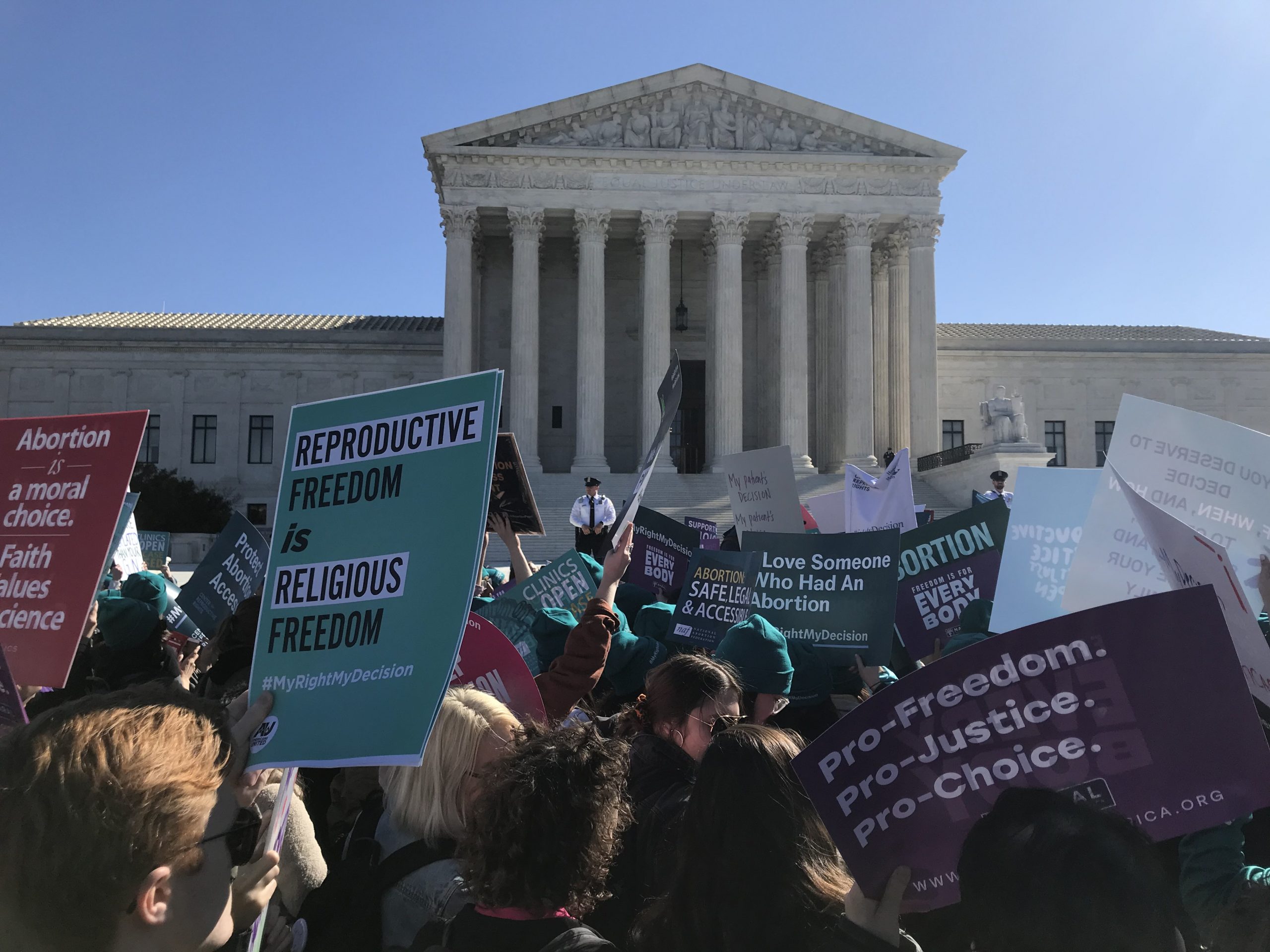 At the U.S. Supreme Court Wednesday morning, supporters of overturning the landmark Roe v. Wade ruling, which expanded abortion rights, defended a Louisiana law that, according to critics, effectively strips physicians from responsibly treating their patients and moves America one step closer to banning abortion outright.

Outside the courthouse, well over 100 abortion rights activists from around the country rallied at the bottom of the Supreme Court’s steps.

A chorus of chants, such as “my body, my choice,” and “hey, hey, ho, ho, abortion bans have got to go,” broke out throughout the morning while the Justices heard oral arguments in the case.

Members of Congress, including Reps. Ayanna Pressley (D-MA) and Debbie Wasserman Schultz (D-FL), and Senate Minority Leader Chuck Schumer (D-NY), joined the rally, and Schumer spoke to the crowd briefly before heading inside.

At issue is whether state governments can impose burdensome regulations on abortion clinics that make it extremely difficult for them to operate. The Supreme Court case, June Medical Center v. Russo, is a response to a 2014 law passed in Louisiana requiring doctors who perform abortions to have admitting privileges at a nearby hospital. If the requirement were left in place, abortion rights advocates warn that women seeking abortion services in the state will have just three options to choose from — or seek care out of state.

Fawn Bolak, a member of ProgressNow Colorado, argued that it was important for Coloradans to show compassion and support for abortion rights because the state plays a “big regional role in abortion access.”

“There is no way [the Supreme Court] can possibly know the breadth of circumstances that might lead someone to making this decision, and at the end of the day, they have the power to reinforce the right that folks have autonomy over their own body,” Bolak told the Colorado Times Recorder. “And I would tell Cory Gardner, thanks but no thanks for putting Gorsuch and Kavanaugh on the bench because those are the folks we’re really nervous about.”

“It’s not a secret in Colorado that abortion access is a fundamental pillar to the values we hold dear,” Bolak said. “The fact that Cory Gardner doesn’t listen to his constituents on this issue … he’ll pay for it in 2020.”

Supporters of abortion rights in Colorado are also waiting to know whether anti-abortion activists will be successful in adding a ballot initiative to the November election ballot that would ban abortion at 22-weeks.

Colorado was the first state to decriminalize abortion before Roe v. Wade was decided nearly 50 years ago.

It remains unclear whether the Supreme Court will side with Louisiana, but the law in question is nearly identical to a Texas abortion law — requiring doctors to have admitting privileges and clinics meet the standards for ambulatory surgical centers — that was struck down in 2016.

That case, Whole Woman’s Health v. Hellerstedt, ruled that “neither of these provisions offers medical benefits sufficient to justify the burdens upon access that each imposes,” placing an “undue burden on abortion access, and each violates the federal Constitution.”

Keanan McGonigle, a fellow with the American Medical Student Association, came to the protest. One of his concerns is how the Supreme Court’s decision and politics will continue to play a role in health outcomes. Whether to have an abortion is an extremely personal decision, he said.

“I’m concerned about the intrusive nature of this particular court case into the patient-physician relationship,” McGonigle said.

McGonigle, who attended medical school in Louisiana, knows all too well how the law in question could harm women throughout the country.

Health outcomes and maternal mortality rates are particular issues Lousiana doctors are grappling with, and “when you add these requirements that are totally off base and not based on science or reality, then it places an undue burden and drives [physicians] out of the business,” McGonigle added.