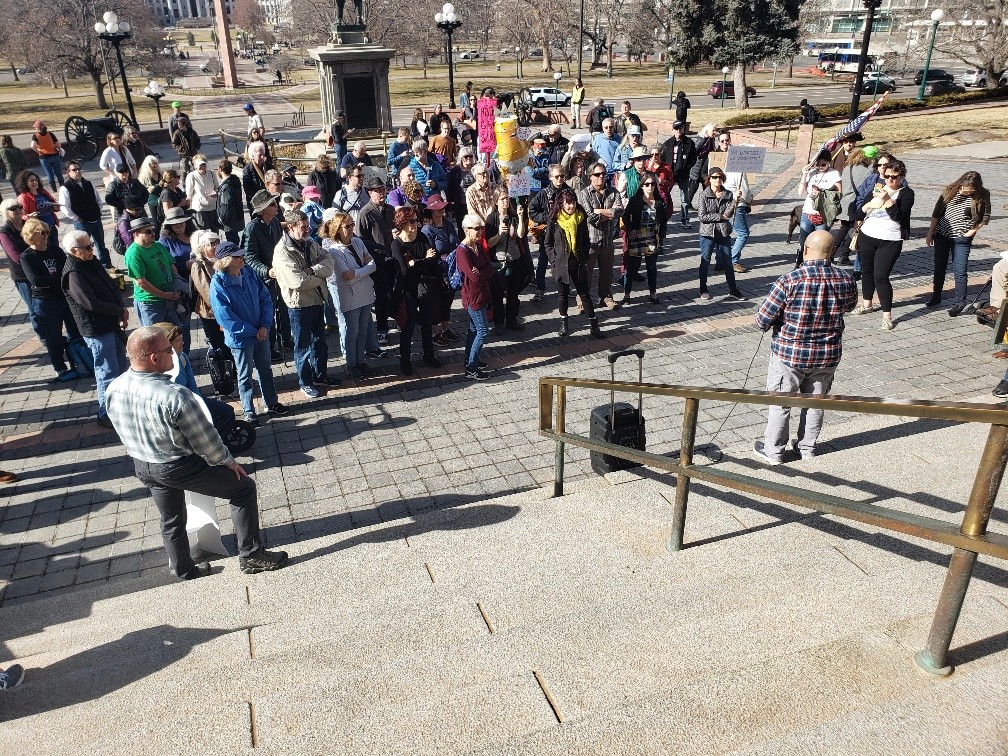 “If we all vote, if we all engage in democracy, that guy is gone,” Denver City Councilman Chris Hinds told about 150 demonstrators at the Colorado Capitol this afternoon, gesturing toward a life-sized cutout of U.S. Sen. Cory Gardner (R-CO), which stood just to the right of the microphone.

“Do you feel like you got transparent and accountable government last night?” Hinds asked the crowd.

The event was billed by organizers as an emergency rally to call out Gardner for being part of the Trump cover-up effort by voting against hearing from witnesses, after saying for weeks he’d consider all the evidence.

Hinds spoke after a rousing speech from former Colorado state Rep. Joe Salazar, who told the crowd he felt “sad” and “downtrodden” last night, after watching Republican Senators, including Gardner, vote nearly unanimously against hearing from any witnesses in the impeachment trial of Trump.

Salazar recalled telling a friend that the law is “being stripped away from us.”

“We have each other,” Salazar said, his voice rising. “It’s time to unite and fight.”

Activist Regan Byrd echoed the same sentiment, telling the crowd, “This is about finishing the work of creating a real and genuine democracy.”

Denver School Board Member Tay Anderson encouraged rally-goers to take a selfie or video of the cardboard cutout of Gardner.

“Tell him what you think of the impeachment trial,” said Anderson.

Demonstrators lingered at the rally, soaking up the 60-degree day.

Asked why she was there, Judy Armstrong said she wanted to “make a statement about how anguished I am about the Senate’s behavior and Cory Gardner’s in particular for not voting for witnesses.”