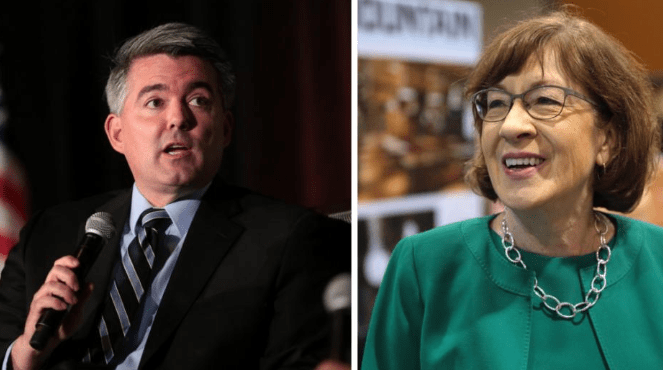 Yesterday, Colorado’s Cory Gardner, who’s one of the most vulnerable senators in November’s election, voted for two anti-abortion bills.

Susan Collins of Maine, who’s equally vulnerable, voted for one of the anti-abortion bills–and against the other one.

On impeachment, you saw the same pattern. Collins did the splits, voting to hear more witnesses and to acquit Trump.

Gardner voted with Trump both times on impeachment.

The recent votes by Gardner and Collins follow a familiar pattern, with Gardner being a reliable Trump voter and Collins less so. (Gardner votes with Trump about 89% of the time; Collins 67%.)

Crank celebrated Gardner on air last week for not being a Susan Collins or Lisa Murkowski (R-AK).

If Gardner were like Collins, “I would vote for him, but I wouldn’t be as enthusiastic about him,” said Crank, who’s a former GOP congressional candidate and executive for Americans for Prosperity, a Koch group.

Would he work as hard for a candidate like Collins?

“I wouldn’t be as enthusiastic about it, but I would work hard, because I wouldn’t want to lose that seat,” he answered pointing to Collins’ votes for the confirmation of Supreme Court Justice Brett Kavanaugh and the tax bill.