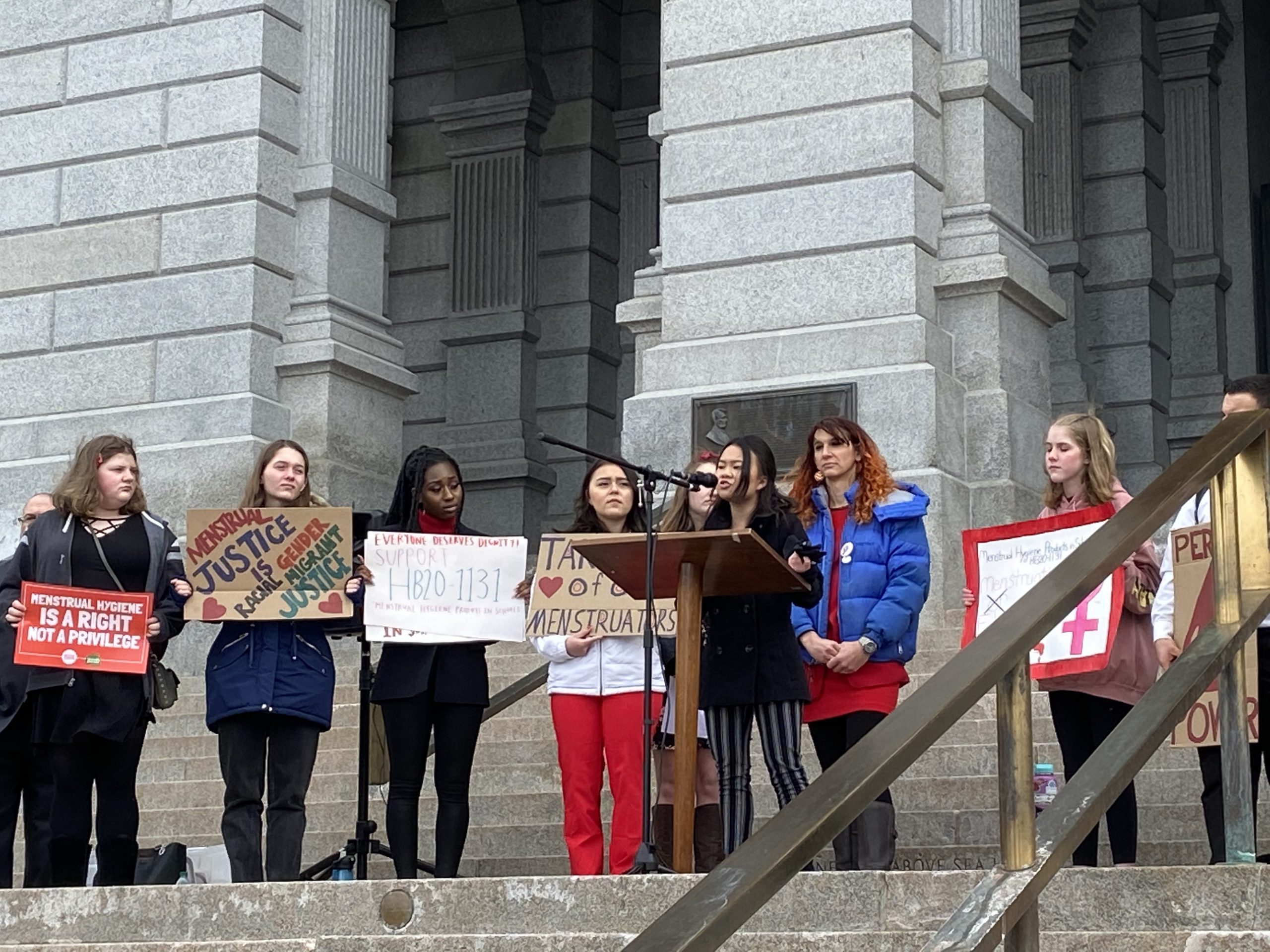 The bill creates a grant program for schools to install pad and tampon dispensers, giving priority to schools with the largest portions of low-income students.

State Rep. Brianna Titone (D-Arvada) began pushing the bill after being approached by a group of students in her suburban Denver district who said they faced opposition from administrators at their school, Arvada West High, when they asked for tampon dispensers in the bathrooms.

They took matters into their own hands, raising the money required to get the machines installed themselves.

“I’m really proud of the students and their leadership,” Titone said.

Some of those students testified at yesterday’s hearing in the House Education Committee, many of them describing period stigma they encounter while at school.

Maia Weslar, an Arvada West student, described the “internal panic” of getting her period at school and realizing she didn’t have a tampon.

“I should not have to feel frantic or distracted while trying to do my school work,” Weslar said.

“For too long students have been forced to hide tampons up our sleeves like some ridiculous covert operation,” said student activist Emma Tang.

State Rep. Perry Buck (R-Windsor) questioned why students couldn’t just go to the nurse’s office if they find themselves in need of a tampon or pad at school.

“I think you’d like to have somebody to talk to,” Buck said. “I would encourage the nurse way and the doctor way before giving them access to something they wouldn’t feel comfortable trying.”

Tang said she doesn’t feel the need or even feel comfortable talking to the school nurse when she gets her period at school.

“My school has a male nurse,” she said. “I’m definitely not comfortable talking to a male nurse about my female body.”

Julia Trujillo, another Arvada West student, also pushed back against Buck’s assertion that they should simply go to the school nurse.

When menstrual products are hidden in nurse’s offices or teacher’s classrooms, the implication is that having a period is a sickness or a public event rather than a normal bodily function that can be handled in the privacy of a restroom,” Trujillo said. “We are treating period products like a luxury.”

Regardless of the students’ arguments, every Republican on the committee voted against the measure.

Rep. Colin Larson (R-Littleton) said his no vote was due to his belief that creating a grant program was the wrong approach. He instead suggested a mandate.

“It’s basic human hygiene and we should just be doing it.”

“This is not the right solution as a grant program,” state Rep. Mark Baisley (R-Roxborough Park) agreed, voting no but adding that he’d like to see a more direct solution.

Buck, another no vote, urged them to”take it to the school board.”

“For us to get involved, we’re just going to dilute the money and it makes it inefficient,” she said.

“I wholeheartedly think this is a place for us,” Rep. Dafna Michaelson Jenet (D-Commerce City) said, disagreeing with Buck that the legislature shouldn’t be involved in creating a solution. “Sometimes it is our job to listen and react. This is a need.”

The bill was passed out of the Education Committee on a party-line vote and was moved to the appropriations committee.