What’s wrong with the Manitou Cliff Dwellings Museum and Preserve? 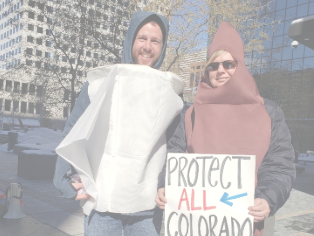 Activists with the progressive Colorado Consumer Protection Coalition want to wipe away “unfair terms in contracts that remove everyday Coloradans’ ability to hold [corporations] responsible for everything from sexual harassment in the workplace to abuse and neglect in nursing homes.”

But how to do this?

On Halloween, how about dressing as a roll of toilet paper and pile of poop?

In addition to sending what some corporations might see as a below-the-belt message, the poop and toilet paper handed out candy and cards to the lunchtime crowd on Denver’s 16th Street Mall Thursday, which was Halloween.

The messages focused in particular on “forced arbitration,” a term that refers to often-hidden clauses in user agreements and other contracts that require consumers or employees to agree to use the corporation’s protocol for dispute settlement/arbitration, instead of a public process, like the court system or a lawsuit. Among other things, this serves to leave no public record of corporate misdeeds.

“Virtually nobody realizes that they’re giving up their legal rights when they sign a contract or click on a user agreement online because corporations hide forced arbitration in the fine print,” said Wendy Howell from the Colorado Working Families Party in a news release. “We’re here today to highlight companies that have earned a treat for eliminating unfair arbitration clauses and to expose others that have tricked their customers and workers into being trapped in an ugly corporate abuse of power.”

Demonstrators also said they wanted to spotlight some corporations, like McDonald’s, that have eliminated unfair arbitration clauses as deserving of treats.

“We’re trying to use the fun of the holiday to get the word out,” Robert Lindgren, Political and Organizing Director of the Colorado AFL-CIO told the Colorado Times Recorder. “We’re trying to do something different to have people take a break from their day and learn something new. Also, we wanted to do something that might get more traction as we share photos of goofy people in costumes.”

The Colorado Consumer Protection Coalition, which is a coalition of over 30 community groups, is pushing Colorado lawmakers to pass legislation next year “to bring transparency and fairness to forced arbitration and other forms of dispute resolution between corporations and consumers and employees,” according to the news release.