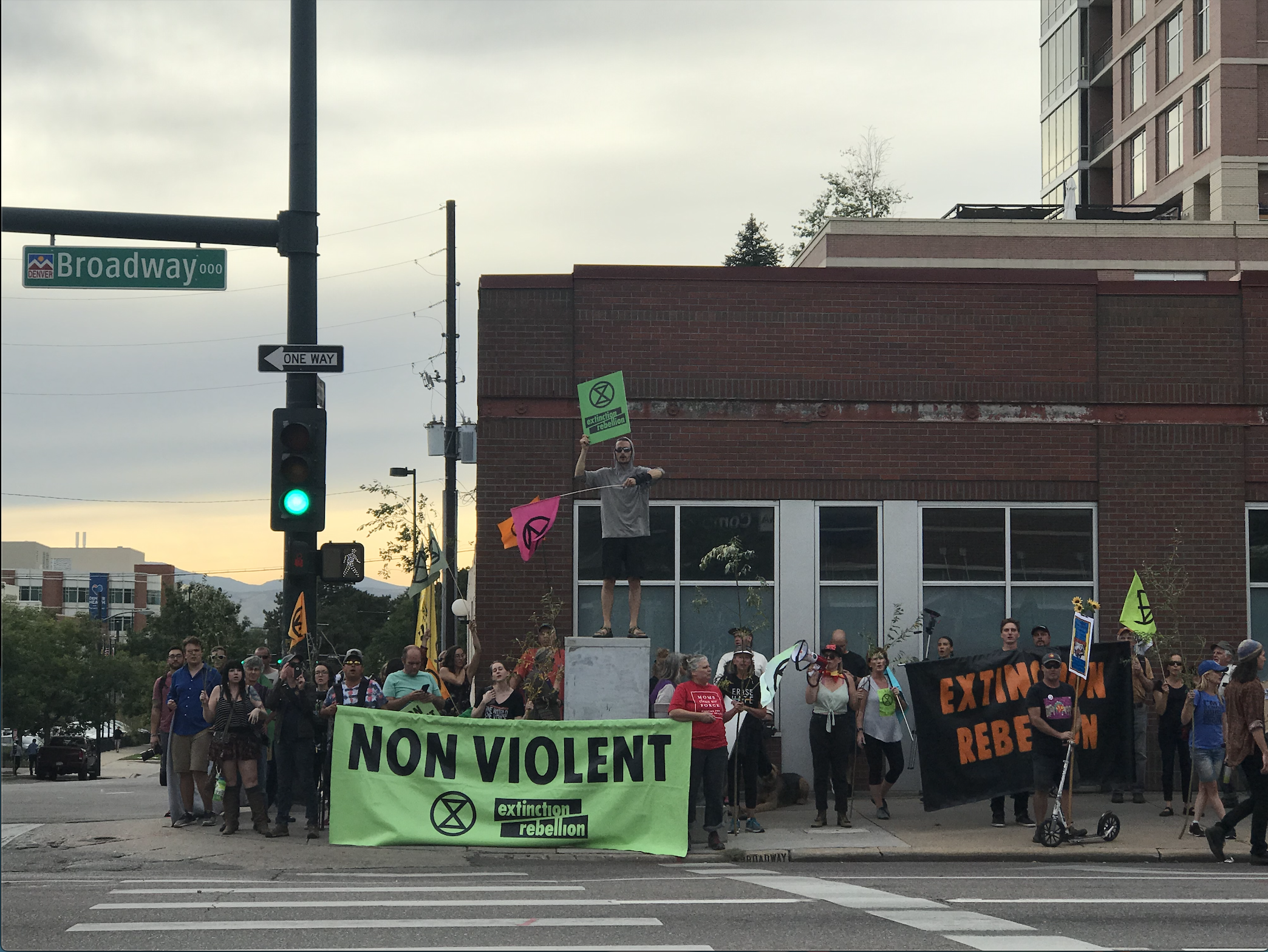 Police arrested a handful of climate justice protesters today for blocking traffic on Speer Blvd, after a small but determined demonstration in Denver’s Sunken Gardens Park.

The protest, organized by Extinction Rebellion (shortened to XR) via social media sites and through the Climate Strike platform, aimed to advocate for protecting the climate and for “vulnerable populations who will be heavily affected by climate breakdown.”

XR is an international movement focused on staging nonviolent, low-risk protests around the world to demand major action to combat climate change. Its protests often contain symbolic elements, from “die-ins” with fake blood, to blockading traffic routes and creating crop circles in the shape of the XR logo.

Extinction Rebellion organized the protest as part of the Colorado Climate Strike Week of Action to demand climate justice and bring awareness to the climate emergency, in response to today’s UN Climate Change Summit focused on devising action for the Paris Agreement, activists said.

The evening event followed a morning rush hour protest put on by XR that resulted in five arrests for blocking a street.

The protest began at 4:30 p.m. with civil disobedience training beginning at 3:30 p.m.

About 35 individuals were involved, and XR organizer Dave Robinson estimated about half of those people played an active role in XR.

Prior to this morning’s protests, XR claimed there was zero to low risk of arrest. After the morning’s arrests, however, they revised that claim, even going so far as to divide the participants into those who wanted to be low risk versus medium risk.

Despite statements from the police prior to the event that there would be no arrests if laws were obeyed, XR decided to commit minor infractions nonetheless. In the words of one vocal protester: “The politicians bend [the law], and we need to bend it back.”

The three arrests of the evening occurred at different times as individuals were crossing the crosswalk after the light had changed. Two of the arrests were protesters, and the other was a member of the press.

In response to the arrests, protester Dave Robinson said he was “completely shocked.”

“We planned this as something we thought we could do that would ‘push’ a little bit, and would have zero chance of arrest,” Robinson said. “When someone’s walking across the street slowly, and they don’t get across–I’ve never seen someone get arrested for that.”

The protest circled a relatively small but highly-trafficked area, making its way from Speer to 8th Avenue, up to and along Lincoln, finishing the circuit back at the north edge of Sunken Gardens Park.

Amidst the sound of chants like “No more oil, keep it in the soil” and “System change not climate change,” cars honked their horns as they drove by to show their support–or their ire at having to wait while the protesters held up the green lights.

Robinson said XR wants to see Denver declare a climate emergency, which has already been done in Fort Collins and Boulder, as well as limit fracking in Colorado.

“I’m here because I have grandchildren, and I want to be able to tell them what I did,” said one protester in response to a question about why she showed up.

“It’s trying to stave off the worst of the tragedy, and have a livable world.”