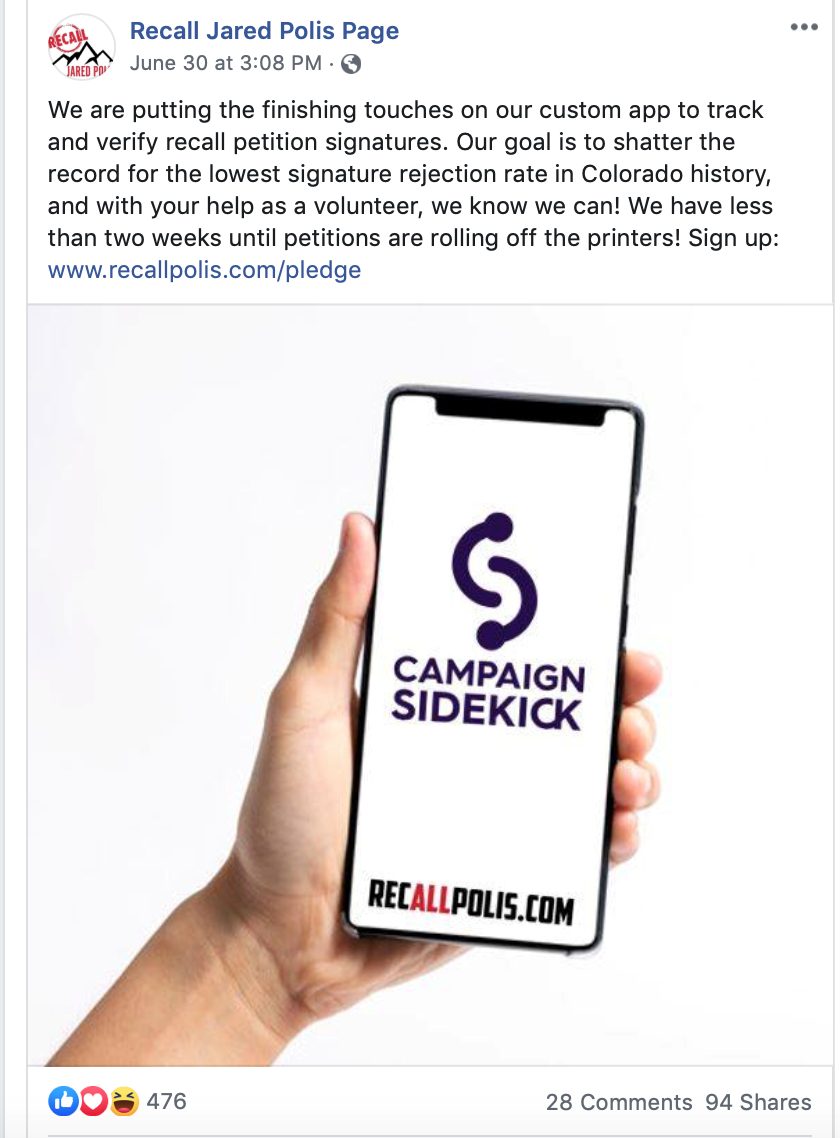 During November’s election, someGOP candidates and their allies in critical Colorado races didn’t use the same voter database, potentially causing them to duplicate time-consuming canvassing efforts and to fail at effective voter mobilization.

“Sidekick is our voter contact application,” said Thomas, when he asked about GOP tools that could be used in multiple elections. “There is also a front-facing database, if you will, that contains all of our voters, all of those things integrated in one system.”

The Colorado Republican Party is listed as a client on the website of CampaignSidekick, which sells the app. Other clients are state Republican Parties, like Arkansas, Arizona, and Ohio.

A campaign to recall Democratic Gov. Jared Polis is also appears to be using the Sidekick app.

The Resist Polis PAC made an expenditure to CampaignSidekick on July 1 for “consultant and professional services.”

In a recent Facebook post, Recall Jared Polis heralded its use of the SideKick app, stating, “We are putting the finishing touches on our custom app to track and verify recall petition signatures. Our goal is to shatter the record for the lowest signature rejection rate in Colorado history, and with you as a volunteer, we know we can!”

In a sales pitch, the CampaignSidekick website describes the Sidekick app this way: “From the fastest databasing system available, to our finely tuned, responsive mobile application, CampaignSidekick is built to save you time and keep you focused on winning votes. Whether you want to cut a computer-optimized walk-list or give walkers freedom to navigate from a live overhead map, we provide the perfect option for every walker and campaign. CampaignSidekick makes it easy for you to precisely target the right voters by any data-point in your account. From complex custom algorithms to simple election history, it’s all easy and right at your finger tips!”

It’s not clear from the CampaignSidekick site who developed the Sidekick App. No individuals are named.

It remains to be seen, however, whether Colorado Republicans and conservative voter mobilization organizations will coalesce around Sidekick, as Democrats apparently do around their database tool.

One issue for Colorado Republicans, according to multiple sources, is an ongoing dispute about who sells the voter information and who’s allegedly making money on it.

CORRECTION: Due to a reporter’s error, this post originally stated, incorrectly, that the Colorado Republican Party appeared to be sharing its voter database app with groups aiming to recall Polis. There is no evidence that this was true or is true. This post was updated Aug. 19 to state that the Resist Polis PAC appears to have purchased the app with its own funds.