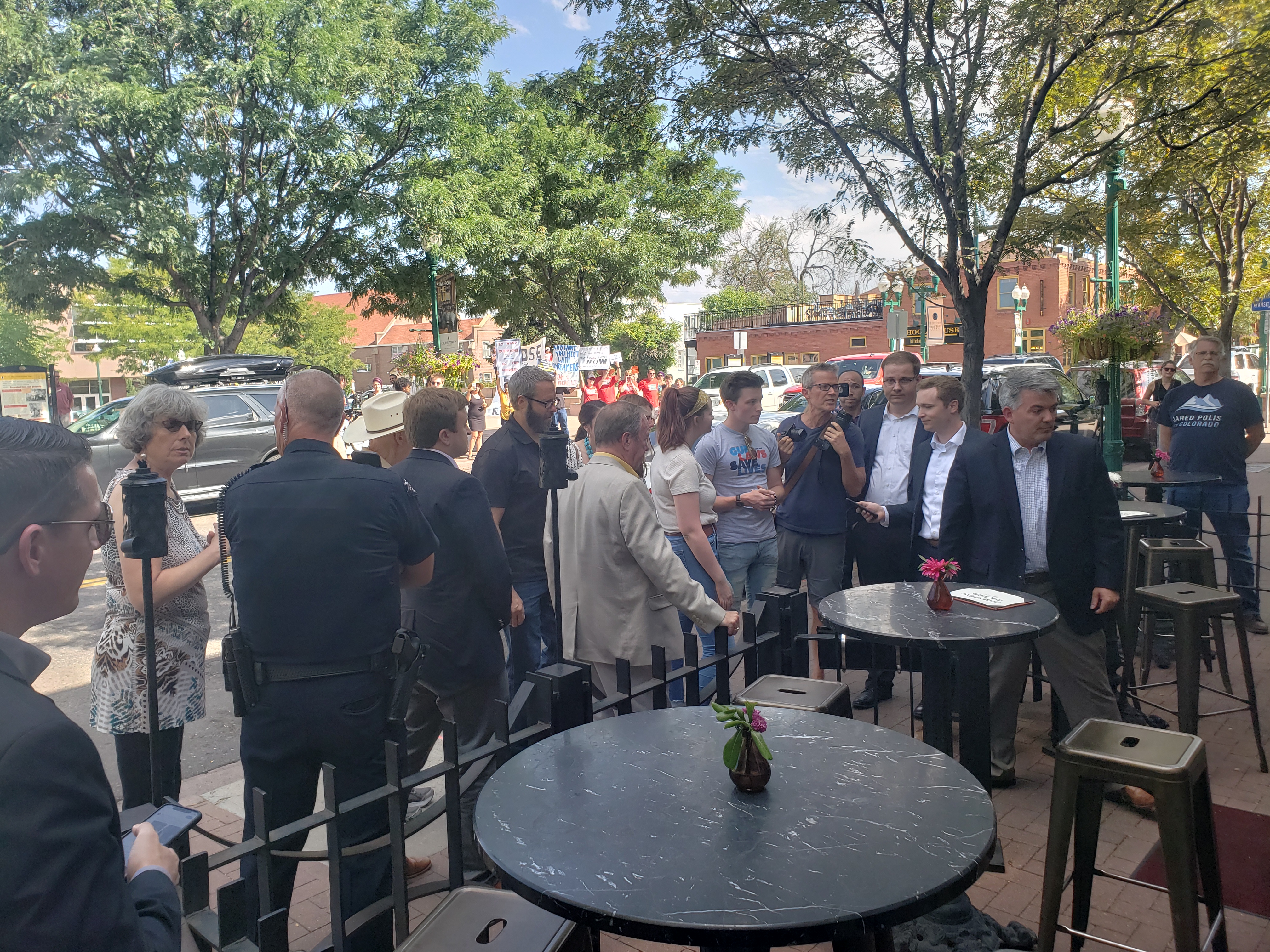 Colorado’s junior Senator emerged from a restaurant called School House Kitchen and Libations, where he’d stopped as part of his little-publicized tour of Arvada, and he was immediately engulfed by questioners.

“When are you going to have a town hall?” a man shouted repeatedly and loudly.

“What about the red flag bill?”

Gardner told him he’d have to see what’s in it.

“It’s a red flag law. Do you believe mentally ill people should be able to have guns?”

Gardner said he wanted to make sure it protected “people’s rights.”

Another question: “Do you support the Dream and Promise Act?”

“Oh, I’m a co-sponsor of the Dream Act in the Senate. Thank you,” he replied quickly, not answering the question.

“When my son goes to kindergarten, how am I supposed to make him feel safe, that he’s not going to be shot by a gun when he goes to school?”

“Constituents want to ask you a question, Senator.”

“Hey Senator Gardner, if we arrange for a town hall meeting, will you be there? Will you come to a town hall?”

Gardner didn’t respond, though at one point he said he hadn’t seen his schedule.

After ten minutes or so, Gardner emerged again and was asked if he wanted the Supreme Court to declare Obamacare unconstitutional.

Gardner said, what I want is a healthcare system that “works.”

But what about the lawsuit? No answer, but he attacked Democrats who back Medicare for All. And he took credit for helping to lower health insurance premiums through an Obamacare program called reinsurance, even though Gardner is against Obamacare.

Asked last month if he supported the lawsuit to kill the Affordable Care Act, Gardner told the Hill, “That’s the court’s decision. If the Democrats want to stand for an unconstitutional law, I guess that’s their choice.”

And the walking continued.

Gardner’s tour of Arvada follows his pattern of scheduling private meetings with little or no public notice and then publicizing them after the fact, giving the appearance of openness and accessibility.

“It’s pretty troublesome for a lot of people, not only in this metro area but across the state,” said Dana Miller, an Indivisible organizer. “A lot of people are really upset. There’s a lot of national press about him not showing up and creating an event like this, where, if this went according to what he planned, he probably would have spoken to six or seven people. His goal is to speak to the smallest number of people as possible.”

Update 8/14: This post was updated with a quote from the Hill.