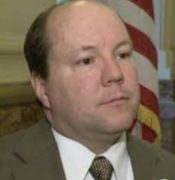 A former Colorado Republican lawmaker is arguing that it’s not guns but abortion, video games, music lyrics, divorces, and other issues that are the root cause of gun massacres, like the murders in El Paso, Texas, and Dayton, Ohio.

“Something has drastically changed in our society,” Ted Harvey, who represented parts of Colorado Springs at the Capitol from 2001-2015, told KNUS radio Wednesday, explaining that when he was growing up in Texas, citizens carried guns into schools and “there was never significant issues down there.”

“The disrespect for life,” said Harvey, who currently heads up the Committee to Defend the President. “We are promoting abortions up to infantacide, after the child has been actually been delivered. And you have the Democrat Party saying you should still be able to kill the child even after its born. You have assisted suicide in states around the country.”

The Democratic Party does not say a child should be killed after birth.

Harvey did not return a voice message asking for evidence for his contention that abortion is a motivating factor for gun massacres.

Citing abortion providers who’ve been “assassinated” and clinics that have been “attacked over many years,” Karen Middleton, Director of NARAL ProChoice Colorado, called Harvey’s comments “dangerous.”

“Conflating gun violence and access to abortion care is not helpful,” Middleton told the Colorado Times Recorder in a statement. “Abortion providers have been targeted, some even assassinated, and clinics have been attacked over many years. It is stochastic terrorism. It is not just about access to weapons, but the rhetoric against people or views different from your own. The same fear you may have going to the mall today is the fear many health care providers live with going to their workplace every day. Suggesting access to abortion is tied to gun violence is nonsense.

“This kind of rhetoric is irresponsible and dangerous. While Colorado has adopted reasonable gun safety measures in recent years, voters have repeatedly rejected attempts to restrict or ban abortion at the ballot box.

This kind of incitement needs to stop, not just for electoral reasons, but because of the threat it poses to health care providers and patients.”

On the radio, Harvey listed other societal ills that he says have “diminished the value of life” in the U.S.

“The divorce rate has certainly skyrocketed,” said Harvey on air.

“To blame it on guns, and to say we should take away citizens’ constitutional right to defend themselves–that is not the direction we should be going.
Certainly, the Republican Party should not be working hand-in-hand with the Democrats to give the Democrat solution, which is to disarm society. And that will solve the problem.”

Harvey agreed with KNUS host Randy Corporon that Trump’s support of the red-fag bill could be the “death knell” for the Republican base.

“You cannot win without a mobilized excited base that’s going to get out and do the hard work, knocking on doors, making phone calls,” Harvey said.

“We cannot afford to have our U.S. Senate and [Democratic Speaker] Nancy Pelosi in the House, writing legislation based on emotion.”

Harvey blamed 2018 losses in Colorado, including the Stapleton loss, in part on candidates who waffled on the red-flag bill and thus “demoralized the base.” Colorado’s red flag law, signed after the election, allows guns to be taken from people deemed dangerous by a judge.

“I think Ken Buck is the future of our party,” said Harvey, saying the leader of the Colorado Republican Party has been a “solid conservative in Congress” who stands up for “conservative values.”

Harvey’s decision to bring abortion into the debate about mass murder isn’t popular among all anti-abortion activists.

“When people downplay the tragedy of mass shootings by comparing to abortion…just don’t,” tweeted national anti-abortion activist Abby Johnson this week. “Please don’t be that kind of movement. Let’s not pit one tragedy against another. The loss of life is always tragic. I have seen prolifers say, ‘These shootings are terrible. But why isn’t there the same outrage over 2000 babies that are killed everyday by abortion?’ That’s just gross, guys.”