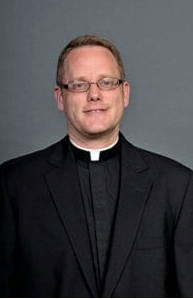 With Colorado Gov. Jared Polis planning to sign legislation next Friday banning licensed therapists from trying to turn gay youth into heterosexuals, a priest, who said he was “representing the Catholic Church” when he testified in March against the conversion-therapy ban, is now saying he testified “on my own behalf.”

In fact, the Archdiocese of Denver, which speaks for the Catholic Church on such matters locally, did “not take a position on this bill,” according to Mark Haas, an Archdiocese spokesman.

“I testified on my own behalf and just meant to identify myself as a Catholic priest who would be bringing a Catholic perspective to the conversation,” Rev. Matthew Hartley, Parochial Vicar at St. Joan of Arc Church in Arvada, said in an email after the Colorado Times Recorder asked who gave him authority to speak for the Catholic Church.

In his March 18 testimony before the Colorado Senate’s State, Veterans, and Military Affairs Committee (here at 1 hour 41 minutes), Hartley denounced the bill banning conversion-therapy on minors, telling lawmakers it was “outdated, irrational, in violation of religious freedom, and discriminatory.”

The Archdiocese of Denver supports the right of its religious leaders, like Hartley, to express their political opinions.

“We support his right, like that of any citizen, to participate in the political process,” said Haas.

Johnny Hultzapple, a South High Student who testified for the ban on conversion therapy for minors, objected to Hartley’s claim to represent the Catholic Church, a couple weeks before Hartley announced he wasn’t really representing the Church.

“It is deceptive and unfair for Hartley to testify saying he ‘represents the Catholic Church’ because there are, in fact, many Catholics who very much support this bill, including Catholic priests from around the country who have personally reached out to me,” Hultzapple wrote in an email to the Colorado Times Recorder. “I am Catholic, and Hartley does not represent me, my family, or thousands of other Catholics who support the banning of conversion therapy. “

In his testimony, Hartley stated that “religious freedom does not begin when someone turns 18.”

“This bill makes it illegal for a minor with parental consent to seek professional help in following their religion,” stated Hartley to the state senate committee. “Many Coloradans under the age of 18 believe the Bible is the word of god and want to follow God’s commandments. The government has no right to make it illegal for a minor to seek help in following god’s commandments by lessening unwanted desires.”

The bill, sponsored by Democratic Sate Reps. Dafna Michaelson Jenet of Commerce City, Daneya Esgar of Pueblo, and State Sen. Stephen Fenberg of Boulder, would not prevent religious leaders, like Hartley, from counseling youth on the topic.

The U.S. Conference of Catholic Bishops urges Catholics who “experience homosexual tendencies and who wish to explore therapy” to seek guidance from “spiritual director” and a qualified “professional who has preparation and competence in psychological counseling and who understands and supports the Church’s teaching on homosexuality.”

The legislation was opposed by most Republican lawmakers, who mostly said it should be up to parents, not the government, to make decisions about therapy for their children.

When he rescinded his statement that he opposed the conversion therapy ban on behalf of the Catholic Church, Hartley also clarified his testimony from the senate hearing in March.

“I want to clarify that I acknowledge that there are certainly harmful practices that fall under the broadly used term ‘conversion-therapy,’ and that I would not advocate or support anything that is unquestionably harmful to a child,” Hartley emailed. “For example: shame, fear, porn, electro-shock based practices, and others are highly immoral and should be outlawed.  If that was all this bill was outlawing, I would completely support the bill. But in my opinion, this bill is so broad that it seems to take away all forms of talk-based therapy and counseling, unless it pushes the child in the one direction the state has deemed appropriate.”

“For example, there were those at the hearing that testified that they experienced confusion about their sexuality as a result of abuse as children and that talk-based therapy helped them find healing and their authentic attractions. This bill would seemingly take away that option.

“Also, as I mentioned in my testimony, what about minors who experience bi-sexual attractions and want to seek assistance in their desire to live a life according to the Gospel’s teachings? This bill seemingly wouldn’t permit a psychiatrist to let their patient explore that option or set it as a goal of their counseling.

“I believe the supporters of this bill have a genuine desire to protect children and I wholeheartedly agree with that intention, but this bill is so broad it infringes on the rights of some of the children it seeks to protect.  If it were amended to prohibit specific harmful practices, then I could have easily supported it, but in its current state it is too broad to be supported.”

Bill proponents, like Amanda Henderson, Director of the Interfaith Alliance of Colorado, that argue that “so-called ‘conversion therapy’ is not therapy, plain and simple.”

“Professional experts from the American Academy of Child Adolescent Psychiatry to the American Psychological Association have not only debunked it, but also have stressed that it actually harms young people,” says Henderson.” As a Christian pastor, I agree with what the Bible says – all of us are created in the image of God. That means that every single person deserves to be seen, loved and treated with dignity just as they are.

“This bill does not prohibit someone from talking to their faith leader if they are struggling with gender and sexuality. In fact, a clergy member who can truly listen and support a young person without judgement can be a lifesaver for a youth coming to terms with their sexuality or gender identity. On the other hand, those who use shame and dogma to bully youth into conversion therapy can really cause pain and suffering that can last a lifetime.

“As people of faith, we should be called to help people to build relationships that are healthy and life-giving, regardless of sexual orientation.”

RELATED ARTICLE: “If Anything, I’ve Gotten Kudos,” Says Republican Lawmaker about the Response to his Vote To Ban Conversion Therapy for Minors

Bill proponents, pointing to a sex-ed bill in the Colorado legislature this year and other issues, also say that Hartley’s comments are illustrative of the Catholic Church being broadly out of step with modern thinking on gender and sex issues.

In a video posted here, Hartley lectures on his views on sexuality and Catholic teachings, including its stance on sex for procreation.

Polis, Colorado’s first openly gay governor, will sign the legislation Friday, May 31, at 9:30 a.m. on the west states of the Colorado Capitol.

Correction: Due to a reporter’s error, an initial version of this post incorrectly stated that Archdiocese encourages religious leaders to express political opinions even if they are at odds with the Catholic Church itself. That’s not correct.