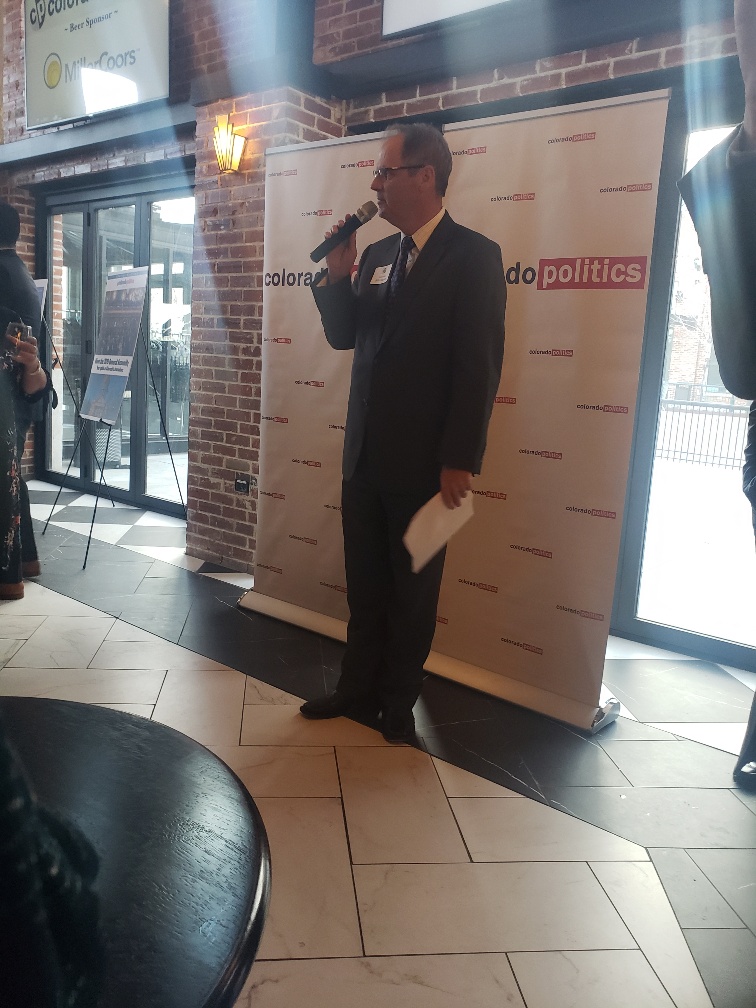 Former Colorado Republican Senate President Bill Cadman served as master of ceremonies at a happy hour Thursday to celebrate the expansion to Denver of Colorado Politics, a weekly print and online political publication.

“Because of their values,” said Cadman, answering his own question about why Colorado Politics has succeeded while other platforms haven’t. “Their values are based on journalistic integrity… And that’s why I actually still read Colorado Politics.”

Most serious news industry analysts blame the demise of journalism not a lack of integrity among failed news outlets, like the Rocky Mountain News, but on the undermining of journalism’s business model, with Craig’s List first devouring newspapers’ classified ads and then other online entities steadily winning over advertisers with their ability to target customers with mind-blowing pinpoint accuracy.

In reality, the core reason for the success of Colorado Politics is conservative billionaire and GOP donor Phil Anschutz, who owns the publication via his business, Clarity Media.

That’s not to say there aren’t great journalists at Colorado Politics, because there are.

To be fair, a last-minute decision to change the date of the celebration, due to Wednesday’s blizzard, kept the state’s top Democrat away. Gov. Jared Polis was scheduled to be among the speakers, but when the event was moved from last Wed. to Thurs. due to the weather, Polis couldn’t make it, according to Jared Wright, who’s now the general manager of Colorado Politics.

Other Democrats who were scheduled to speak before the date change were Attorney General Phil Weiser, John Hickenlooper, Bill Ritter and Wilma and Wellington Webb, plus city council members and candidates. In the past, the event has had the support of many Democrats.

On the Democratic side, senatorial candidate Michael Johnston spoke to the group, and Denver City Councilmember Paul Lopez made an appearance, as did former state house spokeswoman Katie Reinisch.

The staff of Colorado Politics was in attendance, including newly minted Denver columnist Neil Westergaard, a former editor of the Denver Business Journal and The Denver Post. Gazette Editor-in-Chief Vince Bzdek, who oversees Colorado Politic’s editorial content, was also there.

This article was updated to include the fact that other Democrats were scheduled to speak at the event.