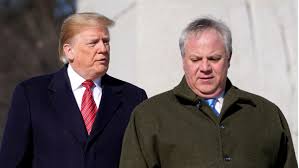 Reactions diverged wildly today to Trump’s nomination of Colorado native and former oil industry lobbyist David Bernhardt for Secretary of Interior, with a leader of a Denver-based environmental group calling Bernhardt an “affront to America’s parks and public lands” and Colorado Sen. Cory Gardner saying his appointment is “fantastic news for Colorado.”

“I’ve known David Bernhardt for many years and have worked closely with him over the last two years to advance Colorado priorities,” Gardner, a Republican, said in a statement. “As a native Coloradan from the Western Slope, David knows how important public lands are to our state and has a keen understanding of the issues Coloradans face every day. From moving the Bureau of Land Management to the West to promoting conservation programs like the Land and Water Conservation Fund, Coloradans will be lucky to have David lead our Interior Department.”

During his tenure at Denver law firm  Brownstein Hyatt Farber Schreck, Bernhardt served as a lawyer for oil and gas companies, which is one reason Jennifer Rokala, Director of the Center for Western Priorities, said Bernhardt shouldn’t be confirmed.

“David Bernhardt’s nomination is an affront to America’s parks and public lands,” said Rokala in a statement. “As an oil and gas lobbyist, Bernhardt pushed to open vast swaths of public lands for drilling and mining. As deputy secretary, he was behind some of the worst policy decisions of Secretary Zinke’s sad tenure, including stripping protections for imperiled wildlife. Bernhardt even used the government shutdown to approve drilling permits for companies linked to his former clients.”

Rokala’s statement directed reporters to a list of actions Bernhardt is undertaking at the request of oil and gas companies that he’s allegedly represented in some way and are conflicts of interest.

“As senators consider Bernhardt’s nomination, it’s crucial they remember that the ongoing investigations into Ryan Zinke’s conduct intersect with policies that David Bernhardt has helped enact. Otherwise, we’ll see another Interior secretary fall into the same ethical abyss that ended Ryan Zinke’s political career. If a walking conflict of interest like David Bernhardt gets confirmed, oversight and true transparency will be more important than ever.”

Bernhardt is currently deputy Secretary of Interior, and would replace Ryan Zinke, who was praised by Colorado Republicans not long before he resigned under pressure and amid ethics investigations.

He met Zinke when he volunteered to help with the Trump transition team, then helped prepare Zinke for his confirmation hearings as Interior secretary.

Both of Colorado’s U.S. senators — Republican Cory Gardner and Democrat Michael Bennet — voted to confirm Bernhardt as deputy Interior secretary in July 2017, but most of Bennet’s Democratic colleagues opposed the nominee, as did several environmental groups. The confirmation vote was 53-43