CO Lawmakers Are Using an Iowa Woman’s Death To Push Their Anti-Immigrant Agenda. The Victim’s Family Wants None of It. 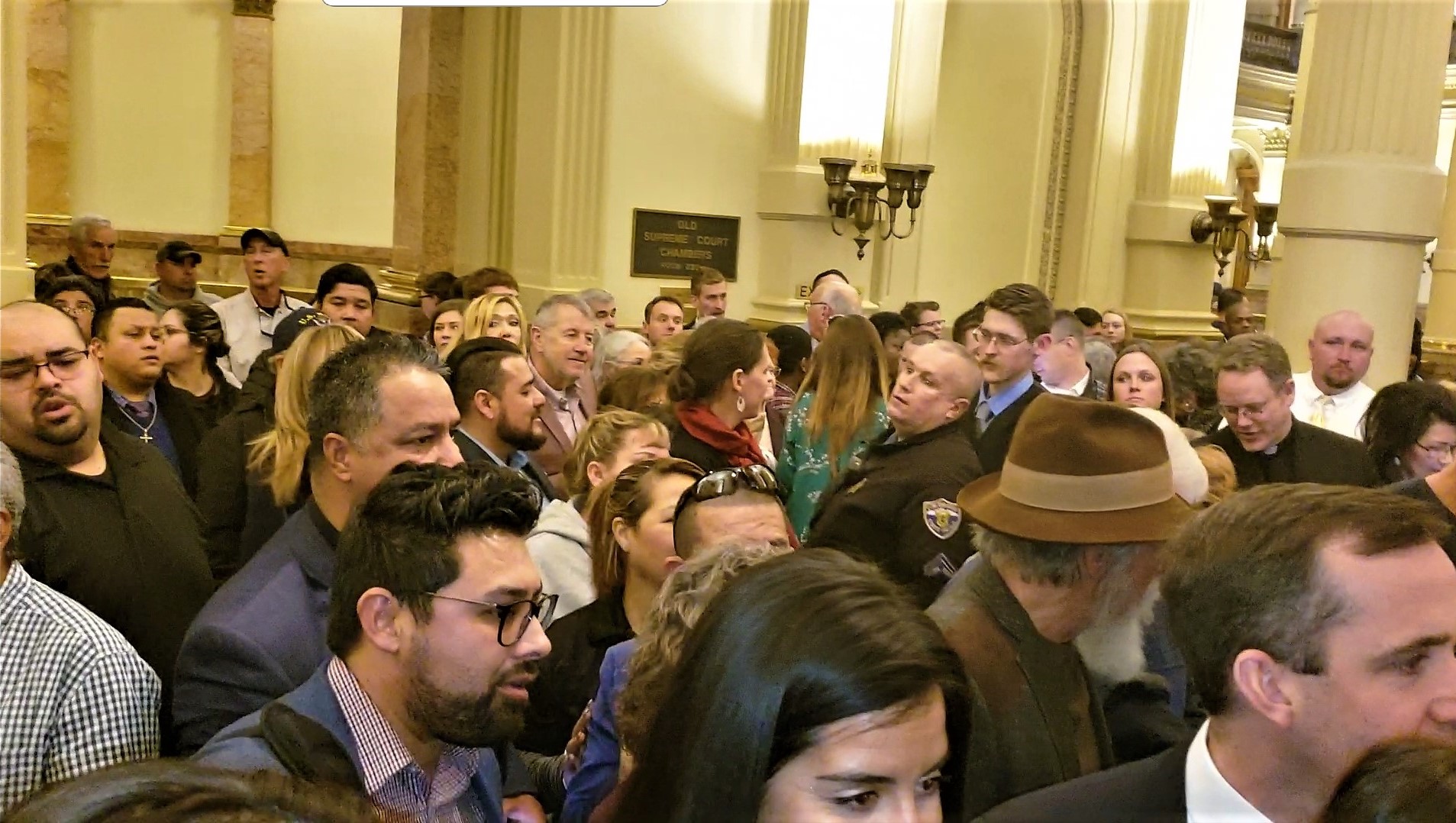 Nearly three hundred people showed up at the Capitol last week to speak against a relatively narrow bill concerning sex education. Many of them were passionate in their opposition; some were outright angry.

One woman gave a graphic description of fringe sex acts that drew audible gasps from the room. Another brandished a condom and talked about pedophiles grooming children.

Why were so many people so upset about a bill clarifying relatively obscure state regulations that have mostly been on the books for five years?

Quite simply, they were lied to.

Religious right advocacy groups blasted out “Action Alert” emails to their followers claiming that this bill would “require children in local public and charter schools to learn the explicit sexual techniques of lesbian, gay, bisexual and transgender individuals.”

The email sent on January 25, five days before the hearing, was signed by “The Family Policy Alliance Team (in association with our state ally, Colorado Family Action)”

On the day before the hearing, another out-of-state hate group called the American Family Association sent portions of the FPA email to its followers and asked them to contact their legislators.

Hours later, the Lakewood-based Centennial Institute blasted its list with a very similar message under the headline: “No on Banning Traditional Family Values from Colorado’s Schools.” It also paid for Facebook ads:

[HB19-1032] prevents educators from informing students that religion or values can guide sexual activity… HB19-1032 is an attempt by the state of Colorado to expose all kids to a pro-LGBTQ sex education agenda while banning traditional family values.

This is false. The bill language explicitly states:

(6) (a) NOTHING IN SUBSECTION (4) OR (5) OF THIS SECTION SHALL BE INTERPRETED TO PROHIBIT DISCUSSION OF MORAL, ETHICAL, OR RELIGIOUS VALUES OF INDIVIDUALS AS THEY PERTAIN TO HUMAN SEXUALITY, HEALTHY RELATIONSHIPS, OR FAMILY FORMATION.

This misinformation was effective. Hundreds of people angered by the falsehoods they had received showed up and pleaded with stunned legislative committee members not to, for example, force schools to teach grade school children to sodomize one another.

Several witnesses incorrectly said HB 1032 would require teaching sexually explicit techniques to children as young as 9 years old (it wouldn’t) or that schools would teach sex ed without input from parents (state law already allows parents to opt out).

Clark: “Hundreds of people have packed into a hearing room at the state capitol tonight over a sex ed bill.  They are furious it gets rid of abstinence education, bans traditional values and will have kids taught graphic sex acts. This bill doesn’t actually do any of that I swear to you it doesn’t, but misinformation and fear are powerful motivators.”

Zelinger: “The belief of what this bill does isn’t really what this bills does. A lawmaker inside, Rep. Kyle Mullica, even asked those testifying to point out in this bill where does it say we’re going to teach teenagers explicit sexual acts.”

Colorado Public Radio reporter Bente Birkeland similarly observed angry Coloradans mistakenly upset over issues having nothing to do with the actual legislation.

Many who spoke against the bill went well beyond the language of the legislation to discuss the appropriateness of gay and bisexual relationships, religion, and family values. People described the sorts of sexual acts they didn’t want their children to learn about. One woman brought out a condom and compared the curriculum to how pedophiles groom their victims. Others thought the bill would normalize deviant sexual acts and equated supporting it to child abuse and promoting a homosexual agenda in Colorado.

Here’s the full text of the section in the bill that the anti-LGBT groups are most upset about:

It enforces existing guidelines that sex education most be comprehensive, rather than “abstinence-only.” It also requires that classes not “exclude the relational or sexual experiences of LGBT individuals.”

The religious right’s propaganda campaign worked on legislators too (or at least gave them cover to say they had heard from concerned constituents):

One Republican legislator wasn’t swayed by ADF and Focus on the Family’s lies, however. In fact, State Sen. Don Coram (R-Montrose) wrote a column for the Cortez Journal pushing back against the misinformation:

Does this bill require districts to teach kids about gay sex? No. It requires districts that choose to teach sex ed that they ensure all students, including LGBTQ students, learn about condoms, HIV and STDs, healthy relationships, etc. Does this bill prohibit schools from talking about abstinence? No. In fact, abstinence is a required component of complete sex ed.

Why does Sen. Coram know so much about the bill? He’s a prime sponsor.

Groups like Alliance Defending Freedom, Focus on the Family and the Centennial Institute present themselves as professional advocacy groups able to offer expert analysis and opinions on their issues. Had they wanted to have their members argue the finer points of sex education policy and religious freedom they could have done so.

As mentioned earlier, ADF, Family Research Council and American Family Association are all identified as anti-LGBT hate groups by the Southern Poverty Law Center (SPLC). It’s worth noting that this designation doesn’t come from any religious beliefs these organizations may hold, but rather the actions that they take. Here’s the SPLC in its own words:

Anti-LGBT groups on the SPLC hate list often link homosexuality to pedophilia, claim that same-sex marriage and LGBT people, in general, are dangers to children, that homosexuality itself is dangerous… Viewing homosexuality as unbiblical or simply opposing same-sex marriage does not qualify an organization to be listed as an anti-LGBT hate group… Disseminating disparaging “facts” about LGBT people that are simply untrue [is] an approach no different to how white supremacists and nativist extremists propagate lies about black people and immigrants to make these communities seem like a danger to society.

The line between faith-based belief and hate group ideology is crossed when an organization promotes demonstrably false information about a group of people based on their identity. That’s exactly what happened with this hearing.

These groups lied to the people who rely on them for accurate information. Hopefully some of those who called their legislators about HB19-1032 got through to Coram, who explained to them what the bill really does. In his own words:

I want to offer my sincere gratitude to those who have called me personally to discuss the bill. It is disappointing that others chose to ridicule and speculate as to my reason for sponsoring this bill, many of whom espouse the Christian principle of “Do unto others as you would have them do unto you.”

Alliance Defending Freedom, Focus on the Family, and the Centennial Institute might want to revisit that same “Golden Rule” before they hit “send” on their next round of emails.

[EDITOR’S NOTE: The Colorado Times Recorder does not use the word “lie” in news stories lightly. We usually require evidence that the liar knew he or she was lying prior to disseminating the lie. But we’ve decided to use the word “lie” in this post, given the sophistication of the groups spreading the misinformation and the gross falsehoods that were pushed out.]