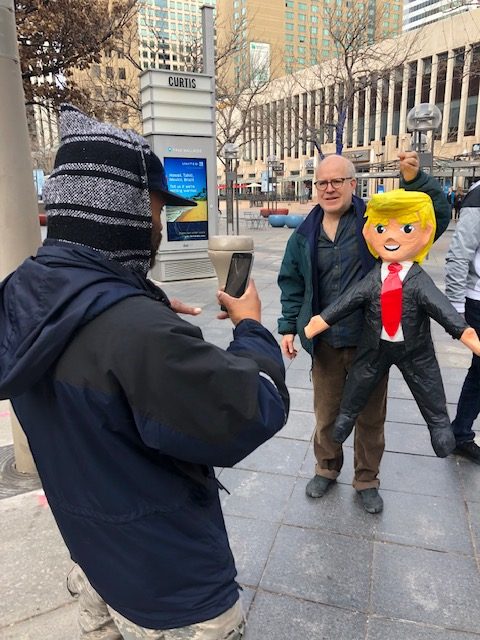 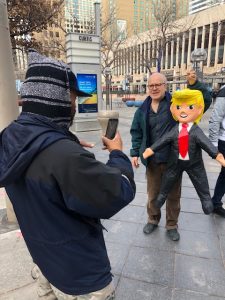 I was bit nervous when I took a Trump piñata to Denver’s 16th Street Mall recently–even though I had no plans to wrap a blindfold around my eyes, grab a bat, and hit it–or to encourage anyone else to do so.

But I figured just the existence of the piñata could upset Trump supporters–and others who might see it as disrespectful to the office of the president.

This was just a lunch-time nonviolent journalistic exercise, but it had the potential to go south.

It turned out that during the one-hour excursion from the office, not a single person objected to the piñata.

The response was 100 percent supportive, but not so much of Trump, starting with the first comment I got from a guy at the wheel of a white van stopped at a light.

“No,” I said, bringing the piñata over to him. “But you can rub his hair.”

From there it was constant amused grins, rubbernecking. Lots of smiles.

In fact, if you’re sad, friendless, and lonely, and want people to come to your party, the Trump pinata could work wonders, at least in downtown Denver.

“Someone is gonna have fun! Can I come to the party? I got 30 bucks!” said one lively guy.

The pinata wasn’t for sale, but lots of people spontaneously offered to buy it–or pay for a whack.

“Where’d you get it? That’s awesome! How much?”

“Two dollars for a swing?”

“You could sell a ton of those. Everyone wants one.”

Lots of folks wanted to have a shot at the piñata right then and there immediately.

“I’ll take a crack at that bitch!”

“There’s gonna be some vicious hits on that thing. He may not even make it down the street.”

“I’m not violent but it makes me want to [raises her knee to the pinata].”

“I’d hit that.. real hard! And I hope there’s liquor inside.”

But mostly, the pinata brought out a general sense of joy.

“Oh! There you go! Somebody’s gonna beat the hell outta that!”

In an hour of walking, there were only two critical comments:

“He’s wearing the wrong suit! An orange jump suit would be perfect. Put it in a box and paint it like a jail cell.”

“Is that supposed to be Trump? One problem with it: he’s smiling.” 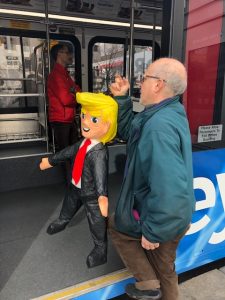 “There are a few trump fans around,” said a man on the Mall Ride, as the bus door shut the door with the announcement, “The doors are closing. Next stop: Arapahoe Street.”

No Trump fans emerged, but if you search for info on Trump pinatas, you find that they’ve been really controversial sometimes (e.g., at a Colorado high school last year, where classes were canceled, and a teacher got death threats after students were allowed to ravage a Trump pinata).

On the mall, one woman admitted she didn’t like the idea of hitting a presidential piñata, but she was okay with the Trump pinata anyway.

“If it were Obama, I would be offended,” she said. “I’ll just own my hypocrisy.”

To be fair, I really should walk the piñata down main street Sterling or Greeley. Or take a field trip to a red state–and see what the reaction is.

Maybe there’s a book there, Travels with a Trump Piñata.

But I have a feeling that once I left the warm blue waters of Denver’s 16th Street Mall, I’d end up being the piñata. And I’d deserve it.