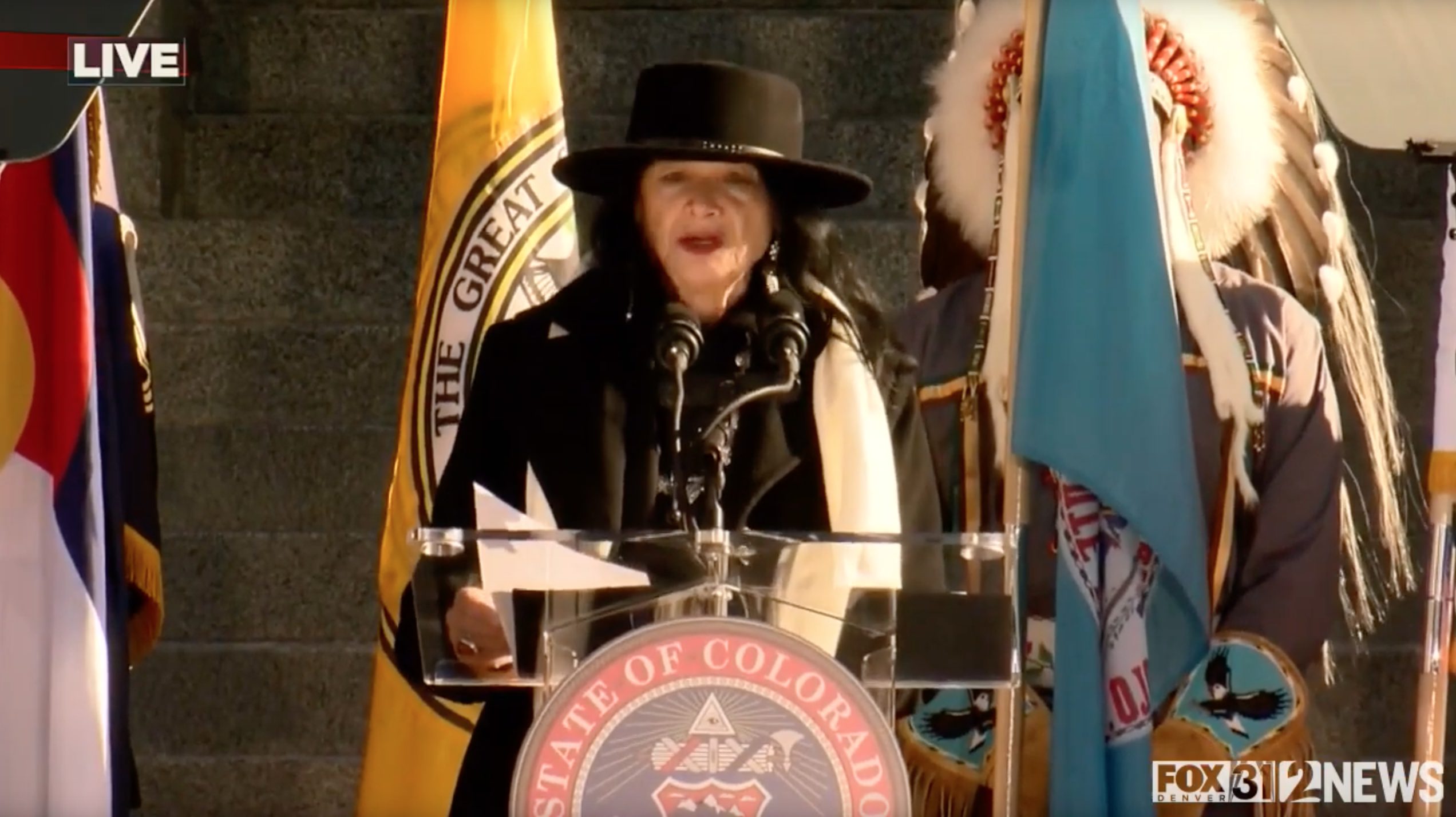 UPDATE: Senator Hill replied with a statement at the end of this post.

Governor Jared Polis took the oath of office today on the west step of the state capitol. The ceremony featured a diverse group of speakers, religious leaders, poets and performers, all celebrating the inauguration of Colorado’s 43rd governor.

State Senator Owen Hill (R-Colorado Springs) attended the event. The Senator is known to like yoga but apparently not poetry, or at least not the poetry he heard today. Hill used Facebook to dismiss at least one of the two poets who read their work at today’s inauguration ceremony for Governor Jared Polis, saying, “Just because you dress funny and no one understands what you are talking about, it doesn’t make you a poet.”

The two poets on the inaugural agenda were Anne Waldman and Toluwanimi Obiwole. Both have received considerable acclaim for their work.

Waldman is the director of the MFA Writing and Poetics program at the Naropa Institute, where she has been teaching for nearly four decades. She is a Chancellor of the Academy of American Poets, a recipient of the American Book Awards’ Lifetime Achievement Award and has published over 40 books of poetry. Nigerian-born Obiwole directs Denver’s nationally acclaimed Slam Nuba poetry team. In 2015 she was was also the city’s first Youth Poet Laureate.

The timing of the post makes it appear to have been posted during Waldman’s performance. An email to Senator Hill seeking clarification as to which poet he was referring to was not immediately returned.

The inauguration is an exciting time for Colorado, and I am honored to welcome Governor Polis. In fact, I expect I am much more optimistic than many of my Republican colleagues about his entrepreneurial spirit leading Colorado.

I posted to lodge my complaint after hearing Anne Waldman’s disjointed diatribe. If being published and creatively casting invective counts as poetry, then expect Donald Trump’s tweets to show up in an anthology sometime soon. God help us, his tweets are just as obnoxious as Waldman’s ramblings.

But since you ask about poetry criticism [Editor’s note: Hill was asked if he had a favorite poet], Toluwanimi Obiwole’s poem was delightful to listen to in her cadence and her heartfelt personal expression shined through, however incoherent words limited the effect.

I would entitle her poem “Up the Street Without a Paddle: A Queer Mix of Metaphors”

Today poetry has the ability to inspire and unite us, in a time when we desperately need unity. Poetry has such potency. For my preference, if I were to spend three years with no companion other than the works of Walt Whitman, Gerard Manly Hopkins, and Kay Ryan, I would be happy.

While I remain optimistic about opportunities to work with Governor Polis on issues like education and entrepreneurship, I’m concerned that these poets are an indication of more hurtful partisanship coming for Colorado.  I will raise a glass of covfefe to Governor Polis’s success and his promise to stand for ALL of Colorado–not more divisiveness.