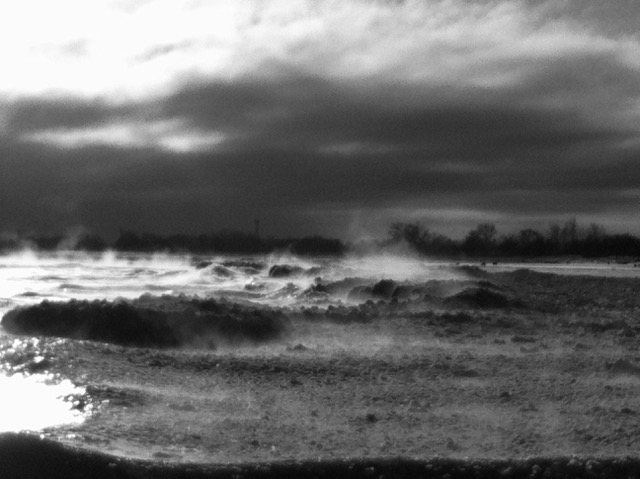 When I was about seven, in the days when color television wasn’t a given in every household, I was thrilled one Saturday morning to see pale colors emerging from the new tv set my parents had brought home.  Cartoons would be more fun!  I mentioned this to my parents, who were surprised:  the new tv set was black and white.  My parents quickly figured out that I was colorblind and was mistaking shades of grey for color.  Still, I felt fine, and I insisted that I could see color in that set.  Obviously it was my parents who had impaired vision. After all, they wore glasses.

Many years later, I have come to see that day as the beginning of something.  Grey has become a welcome friend, greyscale an essential mode of vision. That’s a minority opinion, of course.  No one chooses grey as their favorite color.  You might insist that it’s not even a color, that it’s just a passionless black, a polluted white.  The wan color of depression, of disengagement, apathy.  Of forgettable personalities.  It’s going to rain. And if it doesn’t, you’re going to be unhappy anyway.  Grey is certainly the only sky color associated with an actual clinical disorder, SAD, seasonal affective disorder.

But it’s time to give grey its due. As we approach the mid-twenty-first century, as color and visual life intensify, day by day, screen by screen, we need grey more than ever.  In a world filled every moment with more direct, more intense, visual input, grey is a balm, a simplification, a base state for a hyperstimulated visual cortex.  It’s a treatment for the distraction that has diminished the essential focus of an entire generation.  Grey is the daybed in the anxious digital consumer’s shrink’s office. It’s a visual safe space. Let’s get back to grey.

Grey skies eliminate harsh contrasts, require us to recognize subtlety and nuance. They rest our eyes, softening angles, rounding edges.  They are associated with fog; but a cleansing fog, not a confusing fog.  A foggy mind is a relaxed, receptive mind. The sun-baked mind is a dulled, reactive, anxious, traumatized mind; defensive, in sleep mode when it should be in wake mode. In stasis when it should be active, at an ebb.  Sunny is nice for personality; but for mind–strive for a grey mind, a mind that promotes perspective and balance, seeks clarity, fosters creativity.

In 1933, in In Praise of Shadows, Japanese author Junichiro Tanizaki posited the appreciation of shadows as a way to describe an essential difference between Japanese and western cultures.  Asian cultures have developed, he wrote, the ability to perceive beauty in subtle degrees of shadow, in everyday objects, in simple forms, in decay.  Western cultures, preoccupied with superficial appearance, immediate gratification and novelty–with lightness–have no time for such nuance.  Light destroys shadow.

Tanizaki was writing not just about Japan and the West, but about tradition and modernity.  What was true for Tanizaki as he observed the early twentieth century is perhaps even more true now as we approach the mid-twenty-first, if for the West we substitute global mass culture, and for Japan a haphazardly connected network of cultural threads, an emerging international consciousness that recognizes the compromises and losses of the digital age—and demands that we examine them.

Happily, you need be neither a cultural critic nor colorblind to begin your own examination.  You can take a meaningful step right now in a way that will alter your perception of much that you see every day.  Here’s how to set your iPhone display to greyscale:  Settings: General: Accessibility: Display Accommodations on: Color Filters on: Greyscale.  Then, set a three-click toggle to switch greyscale on and off so you can see the deep blue of your sweetheart’s irises without all those extra steps:  General: Accessibility: Accessibility Shortcut: Color Filters.  Have a grey day.

Ralph Walsh is a freelance writer based in Chicago.