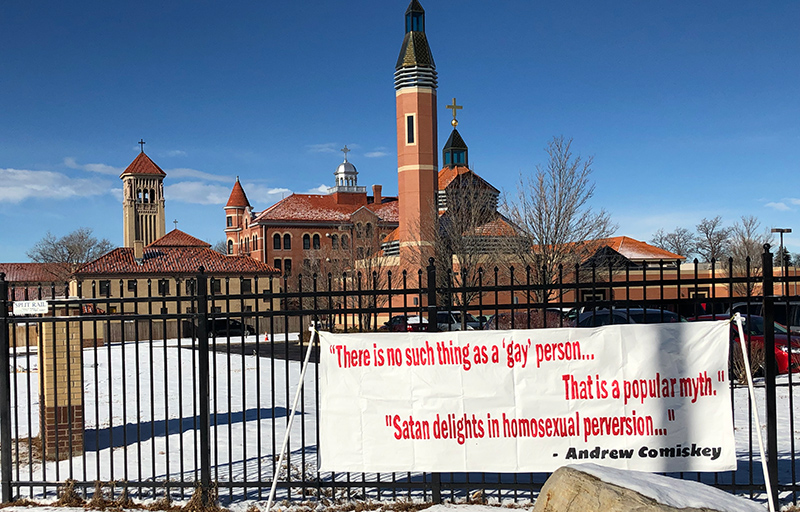 A conference held Saturday by the Archdiocese of Denver that featured Andrew Comiskey, a prominent anti-gay activist and proponent of so-called “conversion therapy,” drew harsh criticism from local progressive groups.

The event, titled “Gender Matters: Fighting for a New Generation,” was put on by Comiskey’s organization Desert Stream / Living Waters Ministries, which aims to “heal” people it deems “sexually and relationally broken,” a classification that includes those who have been victims of abuse, have relationship or marital issues, as well as LGBTQ people.

A banner hung outside the event at the St. John Paul II Center for the New Evangelization in Denver highlighted statements made by Comiskey about LGBTQ people, including, “ delights in homosexual perversion” and “there’s no such thing as a gay person… that is a popular myth.”

Comiskey repeated these ideas at the conference, telling the crowd that all LGBTQ people are “deceived” and “not seeing reality clearly.”

“The enemy is intent on sowing seeds of deception in really bright and really colorful and really fragile people, and that’s what the whole LGBT juggernaut is,” said Comiskey. “And if any Christian teacher, pastor, or anyone else says, ‘Oh yes, that’s really who they are,’ then they are a perpetrator of that deception.”

Also at the conference, Daniel Delgado, who now works for Living Waters, told the crowd how the program had made him “accept the gift of being male.” Another man, identified as Morgan Davis, said he’d been “acting out in homosexual identity” before becoming heterosexual.

These and other “witnesses” cited God as well as Comiskey’s organization as leading them to heterosexuality.

Responding to charges from Comiskey and others that the popular acceptance of LGBTQ people amounts to a moral crisis, Rev. Amanda Henderson, Executive Director of the progressive group Interfaith Alliance of Colorado, said in a press release:

“We do face a moral crisis. We face a moral crisis when people cause harm to others in God’s name. We are in crisis when we forget the opening chapters of our holy text, which name that all people were created in God’s image; good and worthy of love. Rather than preaching hate and bigotry, we should be speaking and acting with love and inclusion. We must honor the basic dignity and humanity of every person and assure that God’s unconditional love is experienced through our words and actions.”

Daniel Ramos, who directs One Colorado, a statewide group advocating for LGBTQ rights, highlighted the need for state legislation that allows LGTBQ people to live their “full, authentic selves.” This would include a ban on conversion therapy for minors, an abusive practice that aims to force LGBTQ kids into heterosexuality:

“As the Executive Director of One Colorado, the state’s leading advocacy organization for LGBTQ Coloradans and their families, I know firsthand that LGBTQ Coloradans are living in every county of our great state,” said Ramos in a press release. “I hear stories from Coloradans all across our state about why gender matters – so every LGBTQ Coloradan can live their lives as their full, authentic selves. Which is why we added a third gender option for Coloradans on their licenses. Which is why we will make it easier for transgender Coloradans to update their birth certificates. And which is why 2019 will be the year that we ban conversion therapy for minors in Colorado.”

Denver’s City Council banned conversion therapy for minors earlier this month, and legislation banning the practice statewide, which was defeated last year by Republicans, is poised to pass the Democratically-controlled state legislature.