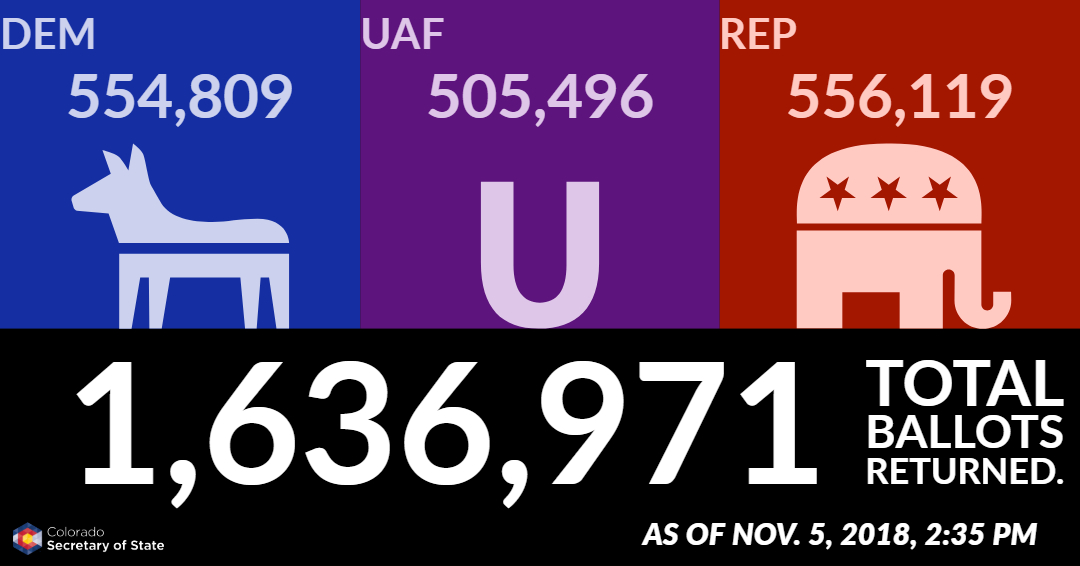 Unaffiliated voters are casting ballots “at a level never seen before in a midterm election in Colorado,” says Republican Pollster Ryan Winger at Magellan Strategies in a blog post today.

At the same time, about 43,000 fewer Republicans have voted this year, and over 70,000 more Democrats have voted, compared to the last midterm election in 2014.

With polls showing that most Colorado unaffiliated voters don’t like Trump are expected to vote for Democrats, it’s time for Republicans to bring in the President to rev up the GOP here, said Magellan Strategies Pollster David Flaherty on KNUS radio Friday.

“It would absolutely help, Julie,” Flaherty said on air. “He could not be more popular or more beloved by Republicans. He has higher approval rating numbers than George W. Bush did practically right after 9-11, to give you an idea [of how high]. However, his approval rating among unaffiliated voters in in the low 30s, and that sort of a double-edged sword.”

“But I think without question it would be a good idea for him to swing through for us to pull even and get that final umph,” said Flaherty on KNUS. “I mean, despite his unpopularity among unaffiliated voters. It’s a tough call, no doubt about it, but if Republicans are going to continue lagging in their ballots turned in, I’d call in the big man.”

Republicans and Democrats have turned in about the same number of ballots so far, according to government figures released today. But the 2014 comparative numbers, plus the polls of unaffiliated voters, give the Democrats the edge, say analysts.

But it’s the final count tomorrow that matters.