The lead organizer with Abolish Slavery Colorado, the campaign to pass Amendment A, received a burned stack of campaign literature on his front porch this afternoon.

Jumoke Emery says he received a call from his wife around 3:30 p.m. after she went outside to rake leaves and noticed the stack of pro-Amendment A flyers still smoldering on their front porch. 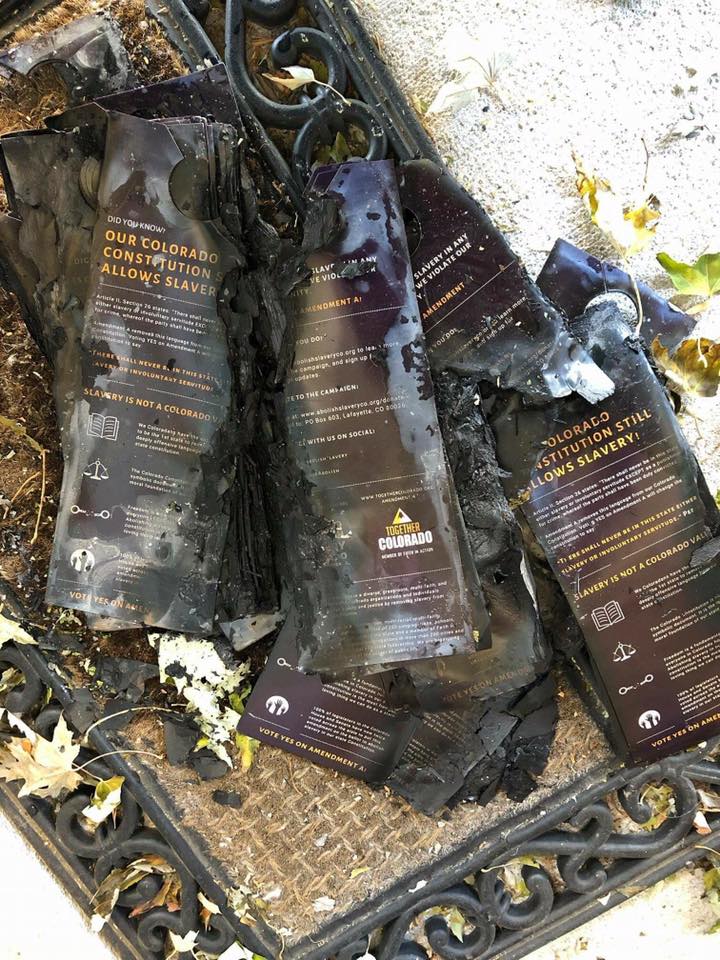 The flyers say things like “Did You Know? Colorado’s Constitution Still Allows Slavery!” and “Slavery Is Not A Colorado Value”.

Worried about his family, Emery rushed home and called the police.

“I knew that it’s because of my work, so I was feeling an extra responsibility to make sure that they were ok,” he said.

Tomorrow voters will decide the fate of Amendment A, which would remove language from Colorado’s Constitution that permits slavery as a punishment for a crime. The measure’s supporters say it’s an important step in burying the state’s racist past.

The measure failed by a narrow margin in 2016 due to confusing ballot language.

Emery says the incident only underscores why Colorado needs Amendment A.

“This proves just how unsymbolic Amendment A is and the material impact of its importance, that in 2018 this particular brand of terrorism hasn’t gone away,” said Emery. “This isn’t the 1950’s. This isn’t the Deep South. This is right here in Denver.”

Following the attack, Emery says he’s now going to fight even harder to make sure Amendment A passes on election day.

“You know what, good. I’m glad my work is pissing people off,” said Emery. “I must be doing something right. We must be in the right fight. Let’s pass Amendment A tomorrow.”