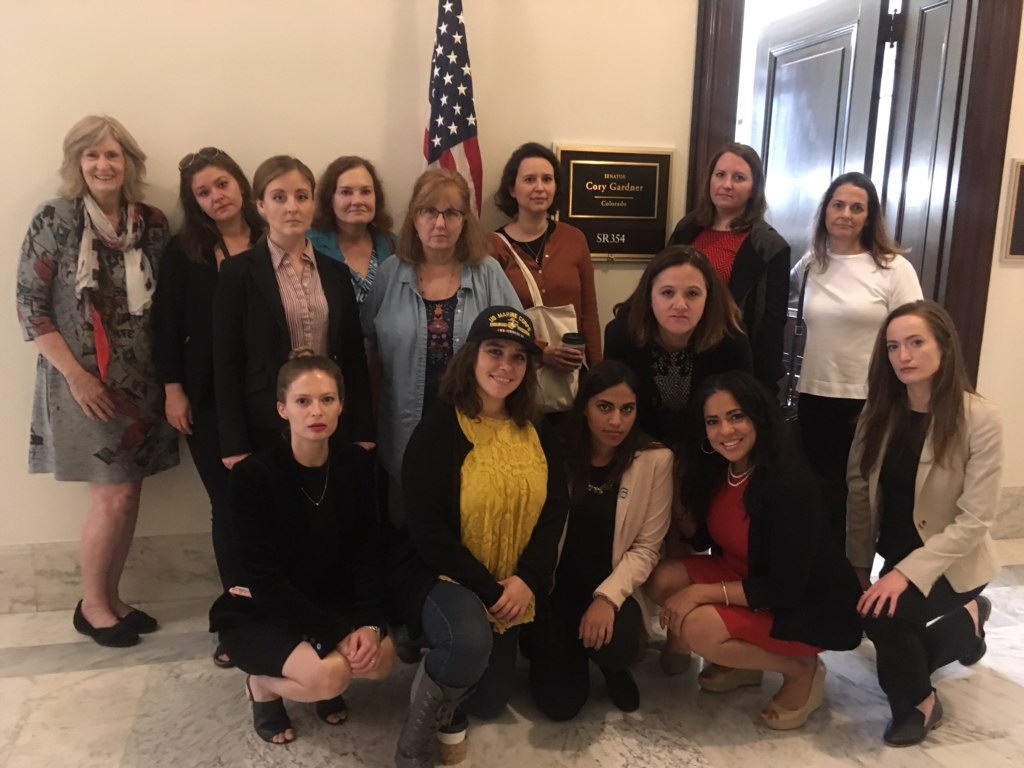 Sixteen Coloradans, many of them survivors of sexual assault, traveled all the way to Washington D.C. to talk with Colorado’s Republican Senator Cory Gardner about Supreme Court nominee Brett Kavanaugh, who’s been accused of sexual assault by multiple women.

According to women who were present, the group waited outside Senator Gardner’s office yesterday for over four hours before getting any face time with the Senator. But they were happy to finally secure a meeting, given that Gardner isn’t the easiest man to get ahold of (see Cardboard Cory, a cardboard cutout that takes questions from constituents at town hall meetings when the flesh and bones version of the senator doesn’t show).

“We desperately need for our elected representatives to listen to us,” said Anna Crawford, the vice chair of the Women’s Lobby of Colorado. “If we have to physically travel over 1600 miles to come here in person and remind them of that, then I guess that’s what we’re doing.”

Several women shared personal stories of sexual assault with the senator in an effort to urge him to vote against Kavanaugh’s nomination.

One of those women is Fawn Bolak of ProgressNow Colorado, who said she traveled to D.C. to share her story and to advocate on behalf of Deborah Ramirez, the Colorado woman whose allegations of sexual misconduct against Kavanaugh have been largely ignored. 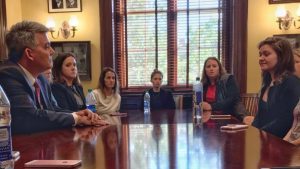 The group was deeply unsatisfied by what Bolak described as “regurgitated Republican talking points” given in response to their question of whether Gardner believed the testimony of Christine Blasey Ford, who last week detailed her allegations of sexual assault against Kavanaugh in front of the Senate Judiciary Committee.

“I asked him very pointedly, who does he believe,” said Elizabeth Hinkley of the ACLU of Colorado, who said she’s a survivor of sexual assault. “But he just kept dodging the question.”

Hinkley said Gardner kept repeating that he needed to see the FBI investigation into the matter, and that he was reluctant to give more details about whether he thought Dr. Ford’s testimony was convincing.

Jeri Giachetti, another sexual assault survivor who was present at the meeting, said she pressed Gardner on how Kavanaugh was dishonest during his testimony.

“I asked him to look at the facts that Kavanaugh lied under oath, and that as a retired English teacher I can tell you that devil’s triangle and boofing are definitely not what he’s saying they were,” said Giachetti. “He would not commit to considering that, and just kept saying, ‘well, I have to go read the report.'”

“It was just so maddening. Did you not hear what I just asked you? You’re talking about the sham investigation, and I’m talking about the hearing that you already watched. We don’t want a Supreme Court justice that lies, do we?” said Giachetti.

Crawford agreed that the senator avoided giving the group a clear response.

“I don’t feel like we got any answers,” said Crawford. “I feel like he was dodging all of our questions and trying not to give us direct answers to anything.”

The senator was apparently not swayed after hearing about his constituents’ experiences and voted to advance Kavanaugh’s nomination Friday morning.

“I’m here to try to change their minds, but if I can’t do that, I want to make them feel as uncomfortable as possible when making this vote,” said Hinkley. “It’s truly appalling to me that the people who we elect to represent us do not value women’s truth or believe women, and even if they do, they just don’t give a shit. As a woman and as a survivor, it just makes me so angry.”

Bolak said she and several of the women who were present in yesterday’s meeting with Gardner were sitting in the Senate gallery this morning when he voted yes.

“We stood up and turned our backs to him because he’s turned his back on us,” said Bolak.

“His constituents flew over 1600 miles from Colorado to come and relive their trauma in an effort to show how important it is that we believe survivors,” she said. “It shows how little he cares about this issue that he would be willing to go against his constituents to score some political points.”

The FBI investigation into the sexual assault claims against Kavanaugh reportedly failed to interview key witnesses, including Dr. Ford herself and several who claimed to have evidence that would corroborate the allegations. But after seeing the report Thursday, many of the senators thought to be key swing votes, including Democratic Sen. Joe Manchin and Republican Sens. Jeff Flake and Susan Collins, voted to advance the nomination.

“It tells survivors that we are still not given any credence and that powerful males are dominant and will get their way,” said Giachetti. “We feel powerless. That’s the way they want us to feel. But we’re not going to quit fighting. We’ll just have to do it at the voting booth.”

A final vote on Kavanaugh’s nomination is set for Saturday.