by
Erik Maulbetsch
posted on
October 8, 2018

Organizers of a Sept 15 rally at the Colorado Capitol have objected to the Colorado Times Recorder’s characterization of the event as a hate group rally.

Several hosts of Major League Liberty, the far-right social media podcast specifically objected to the assertion that the event was also hosted by the Proud Boys, which the Southern Poverty Law Center designates as a hate group.

The Proud Boys promoted the event on Facebook using Major League Liberty’s ads and comprised the largest single group of attendees. Speakers included “Proud Boy James,” who began his speech by leading the audience in reciting the group’s slogan.

“I am a proud Western chauvinist who refuses to apologize for creating the modern world.” 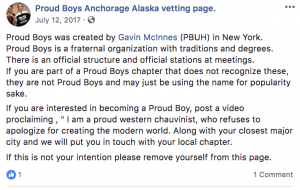 Members of the Proud Boys are asked to post that video of them making that statement publicly on social media as the first step of joining the group.

Later at the rally, Proud Boy James thanked the Colorado Springs and Denver chapters, including a number of members by name, whom he credited with standing up to unnamed attackers prior to the rally. He congratulated them, saying, “I’m really proud of you boys for your 4th degree,” a reference to the group’s ultimate membership rank: having a physical altercation, or as founder Gavin McInnes describes it, “endured a major conflict related to the cause.”

“The media calls us violent because we dare to hit back after being attacked. The 4th degree is not about offense. It’s about defense.”

“I think the SPLC is a hate group. They are so divisive and ridiculous. They do a lot of things I think are good, but why they are the authority on who gets named a hate group is anybody’s guess.”

Rep. Winkler said he was there to support freedom of speech and that he cares about sharing positive, inclusive messages. He stated that didn’t agree with the messaging or communication style used by some people at the rally, nor the characterization of the rally by other groups that have referenced the Colorado Times Recorder’s reporting.

Major League Liberty says they hosted the event alone, which means the Proud Boys only promoted, gave speeches at, and were the largest single group in attendance at the rally. As such the Times Recorder has updated the headline of the original article to Far-Right Rally At Capitol Features Hate Group, Colorado Republican Speakers and Stapleton Super PAC.

However, in Major League Liberty’s (MLL) Sept. 30 podcast, host Louis Huey insisted that “no proven hate groups were there,” despite the SPLC designation cited above and in the original reporting.

Huey also appeared not to distinguish between MLL and the Proud Boys, referring to both groups collectively as “we.” Replying to emails from MLL, the Times Recorder asked the MLL hosts if any of them consider themselves Proud Boys, but has received no response. That said, host Louis Huey posted a picture of himself wearing a Proud Boys shirt earlier this week.

After reading part of the article aloud, Huey complained, “I’ve got the Colorado Times Recorder and Erik Maulbetsch calling me a far-right hate group. Major League Liberty and the Proud Boys are not a far-right hate group by any stretch of the means. If that was so, we wouldn’t have invited two Hispanics and an African-American man to speak at our event.”

9News first reported on the rally with the Proud Boys. The television station chose to refer to the Proud Boys as a “far right” group, while not mentioning Major League Liberty. It also did not state, as the Colorado Times Recorder did, that the rally was hosted by the Proud Boys.

In another podcast about the article, another MLL host named Jersey challenged anyone watching the show to find hateful content. He called it the #FindTheHateChallenge.

“I challenge you to find hate in any of our videos. Anytime a Democrat or a liberal wants to say that we’re Nazis or we’re White Nationalists, all we gotta do is say OK- ‘hashtag Find The Hate challenge.'”

I grew up outside of Flint, MI for over 20 years; with close to 30% of my graduating class was African-America I was never once called a racist! And here we go, $150 in my campaign account and look at that- “White Nationalist.”

Well you’re darn right. I believe America is the best country and I’m Caucasian. There’s nothing I can do about that. That used to be called being a patriot.”
Hosts: “Yeah. Absolutely. Well I think we should be proud.”  — (at 51:50 min)