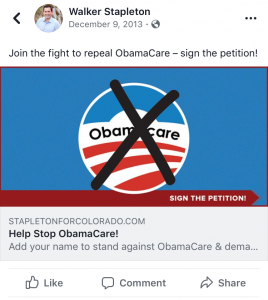 During his campaign for Colorado governor, Walker Stapleton has offered multiple stances on healthcare issues including 1) his view that the Affordable Care Act be killed completely by the federal government and, more narrowly, 2) his desire to eliminate Colorado’s health insurance exchange, which offers Obamacare-approved insurance plans to the public (with subsidies for low-income people).

This comports with Stapleton’s stance on an Obamacare repeal over much of his career. (See above.) Stapleton’s campaign didn’t return a message seeking comment.

A full repeal of Obamacare, which would need to clear Congress and the president, would cause over a half million Coloradans to lose their health insurance over five years, according to government figures.

And, depending on the details, it would broadly increase the cost of health insurance in Colorado, according to multiple studies of different proposals.

While on the campaign trail, Stapleton has been more vociferous about shutting down Colorado’s insurance exchange, called Connect for Health Colorado.

The Republican candidate told KOA radio in Denver, for example, that “we’re going to have to scrap the exchange” in Colorado, because it’s “not viable.” 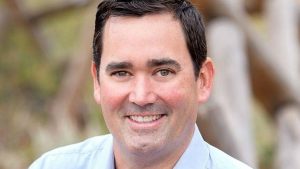 Analysts point to evidence that shutting down Connect for Health would not only cause more Coloradans to become uninsured but also cause health insurance rates to rise inside and outside of the individual health insurance market.

If Connect for Health were shuttered, assuming the Affordable Care Act (ACA) remains as it is today, Coloradans would use the federal health insurance exchange, called “Healthcare.gov,” for purchasing insurance on the individual market.

Such a move could have wide ramifications, say healthcare analysts.

“Repealing Connect For Colorado would remove state control of our insurance marketplace and create confusion by shifting people to Healthcare.gov,” said Adam Fox, Director of Strategic Engagement for the Colorado Consumer Health Initiative. “Connect for Health Colorado provides robust tools to help Coloradans sort through their options and is much more responsive than Healthcare.gov. Repealing our state-based marketplace would eliminate most or all of the in-person enrollment assistance Coloradans can currently access, it would give Coloradans less time to enroll in coverage, and the confusion and lack of in-state support could lead to insurance rates in the individual and group markets increasing as fewer healthier people get coverage.”

“What ends up happening is, the people who know that they are going to need more health care, those people with chronic conditions and preexisting conditions or higher medical needs, they are typically the ones who are going to go through whatever effort is really necessary to attain coverage, provided it’s available. And those people who are healthier and younger by comparison will get fed up with the process much quicker and may decide to forgo coverage which will make the pool deteriorate and make the rates increase.”

“To top it off, repealing Connect for Health Colorado would unnecessarily cost Colorado millions of dollars just to transition to a less robust federal marketplace.”

Colorado Republicans, led by State Sen. Jim Smallwood of Parker, proposed legislation in 2017 to shutter the Connect for Health exchange.

Smallwood and other conservatives argued that Connect for Colorado wasn’t delivering enough insurance options to individual consumers around the state–and did nothing for Coloradans that they couldn’t get from the federal health insurance exchange.

Smallwood eventually killed his own bill, saying he wanted to improve it, but at a hearing on the legislation, Natalie Wood, Senior Policy Analyst with the Bell Policy Center, testified that “Making changes [to Colorado’s health insurance exchange] now could exacerbate anxiety and turmoil for insurers and consumers.”

In her testimony, Woods pointed to an analysis posted by the Commonwealth Fund by  Kevin Lucia, a research professor at the McCourt School of Public Policy, Health Policy Institute, Center on Health Insurance Reforms at Georgetown University and Katie Keith, a founding steering committee member of Out2Enroll.

“If a federal replacement plan is not in place, state legislators would have little guidance about whether they should, for instance, explore alternative regulatory approaches or coverage mechanisms such as high-risk pools,” wrote Lucia and Keith. “Premature state-level changes could contribute to the destabilization of state insurance markets.”