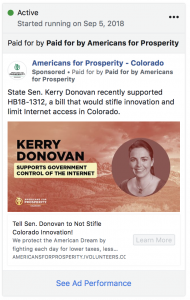 An organization backed by Republican billionaires Charles and David Koch is attacking Democratic State Sen. Kerry Donovan of Vail, who is facing GOP challenger Olen Lund in the upcoming election.

The Koch organization, called Americans for Prosperity (AFP), mailed advertisements to voters in Donovan’s sprawling district in the central mountains.

The ads attack Donovan for her sponsorship of legislation promoting “net neutrality,” which aims to prevent giant corporations from dominating the internet, according to its proponents.

Donovan is running to retain one of five swing senate seats in Colorado that will likely determine which party controls the senate chamber, where Republicans currently hold a one-seat majority.

Donovan’s bill, HB18-1312, would have prevented state-funded companies that offer internet services from charging additional fees based on internet speeds, blocking lawful internet content, or instituting other measures to regulate traffic on the internet.

It’s a local version of national net neutrality policy measures, which are generally supported by Democrats and opposed by Republicans, including Trump.

The Koch Brothers’ AFP organization says net neutrality legislation hurts the ability of businesses to develop and expand their internet operations.  The Colorado chapter of AFP is associated with the national AFP.

At the national level, AFP has waged a multi-faceted campaign to roll back Obama-era regulations favoring net neutrality. Trump appointees to the Federal Communications Commission sided with conservatives, but the overturn of Obama’s net neutrality protections has stalled in the U.S. Senate.

In Colorado, Donovan’s bill would “stifle innovation and limit internet access in Colorado,” states AFP Colorado in one Facebook advertisement attacking the Democrat. 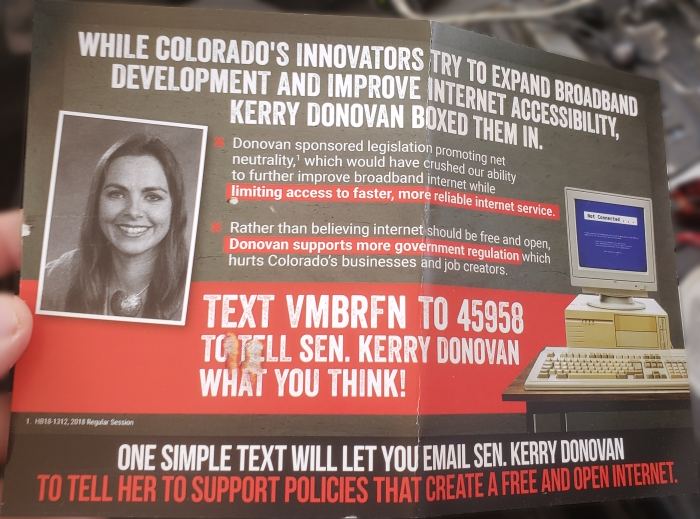 The ad also states that AFP protects the “American Dream by fighting each day to for lower taxes, less government regulation, and economic prosperity for all.”

Donovan’s legislation passed the Colorado State House, which is controlled by Democrats, but was killed by Republicans in the state senate.

Another Koch-backed entity is donating directly to the state senate campaigns of Republicans Tim Neville of Littleton and Christine Jensen of Wheat Ridge, who are both running for competitive suburban senate seats.

The Koch donations to Neville and Jensen are part of $400 million that the Kochs have pledged to spend this election cycle.

A win by Neville, Jensen, or Lund (over Donovan) would probably allow Republicans to retain their majority in the chamber, political analysts say.