There is no evidence for this, but it echoes similar fear-based assertions by President Donald J. Trump in various tweets. 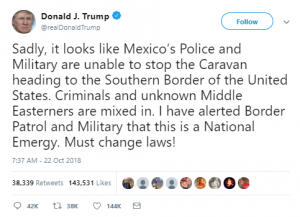 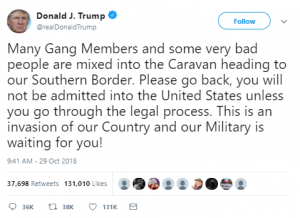 Spencer is described by the Southern Poverty Law Center as “America’s most prolific and vociferous anti-Muslim propagandists.”

“Yeah, there were some Bangladeshis, according to Univision, the Spanish language news channel. Some Bangladeshis have been discovered, and it’s interesting to note the vehemence of the denials. There have been Bangladeshis discovered in this caravan coming up from Honduras without any explanation. And of course the Guatemalan president Jimmy Morales made international headlines by saying that he’d apprehended 100 jihadis. And the discussion was in the context of this caravan, although since then the establishment media has strenuously pointed out that he didn’t say it was in the caravan. And so they’re trying to give the impression that the caravan is completely clean, and the leader of the caravan has said there is absolutely not a single terrorist here. I mean, how do you know that, man? You know, you’ve got thousands of people going along. […] Their food is organized. Their rest facilities, it has all been organized and all been paid for by people — we do not know who. And it’s clear that it’s exactly what you say — it’s an invasion. And there are jihadi elements among it.

SPENCER: [00:02:07] Yes. If Trump is going to follow through, then — and I certainly hope he does — then they are going to be stopped. And maybe some people are going to get killed. I mean, nobody wants that. But if they press it, then this could break out into violence.

Listen to Boyles’ and Spencer’s exchange in the link below: