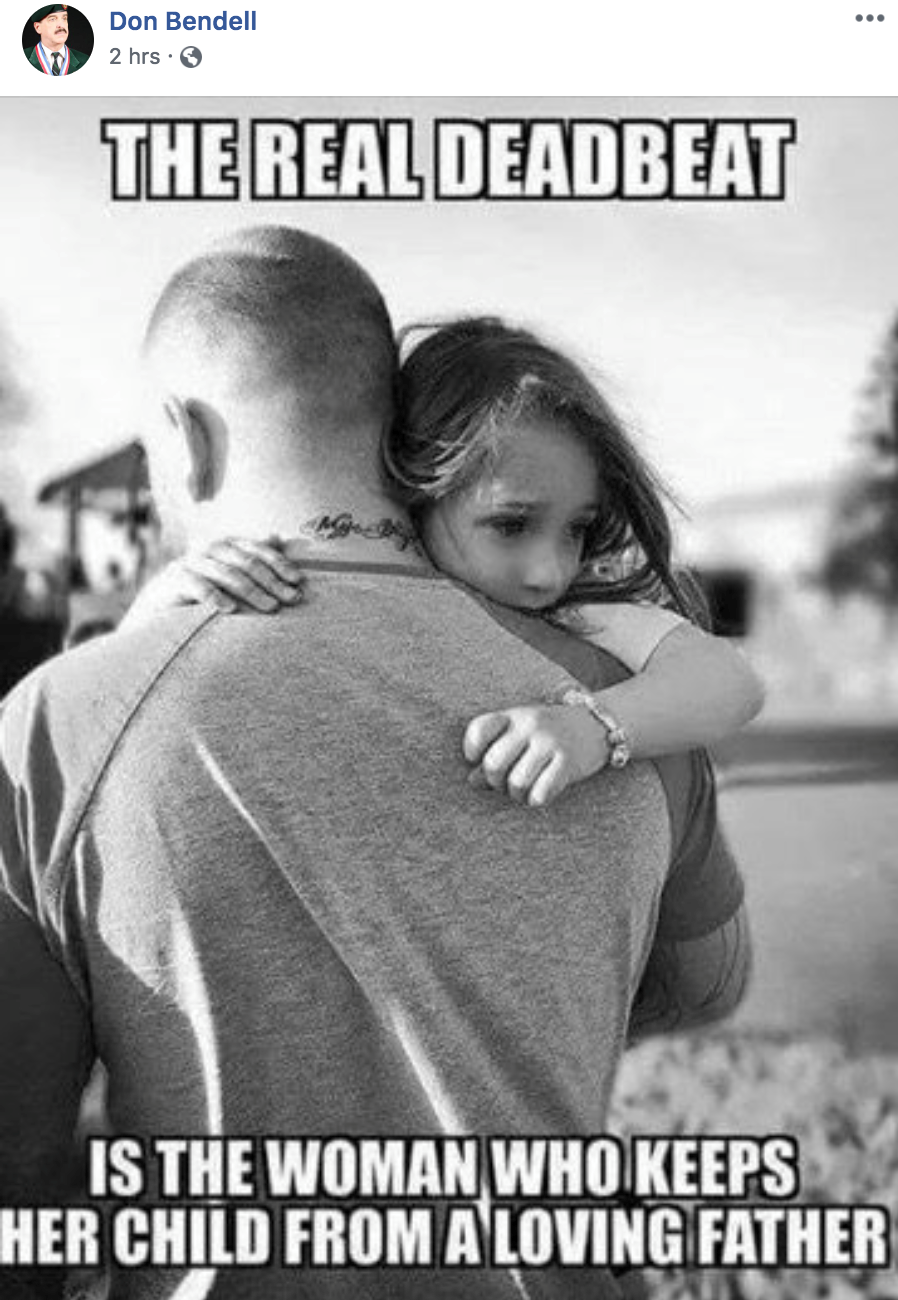 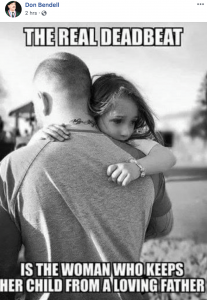 A Pueblo state legislative candidate, who failed to pay child support for nearly 17 years, recently shared a Facebook meme stating, “THE REAL DEADBEAT IS THE WOMAN WHO KEEPS HER CHILD FROM A LOVING FATHER.”

Don Bendell, a Republican who’s running for the state house seat occupied by Judy Reyher, admitted that he started paying court-ordered child support after his three children had grown up.

The meme, which depicts a man holding a young girl in his arms, is noteworthy because, by using the phrase “the real deadbeat,” it appears to downplay the problem of fathers, like Bendell himself, who don’t support their children.

Asked about the post by the Colorado Times Recorder, Bendell responded via email:

Bendell: I DID NOT fail to pay child support. I did get behind, owned, and apologized for it. I paid every penny that I owed plus interest. My ex-wife and I lived in Ohio and she took my three children from my first marriage and moved them to NC where she was from in 1979 while I was out of town on a business trip. We got divorced in Ohio and I did not “flee NC authorities,” as I was not even there. Deadbeats run and hide and try not to pay. I DID PAY, every cent. It is old news but salacious and inaccurate slurs have been used against me in this campaign. I have spoken about issues and my solutions for them, and that is what people care about.

I do not downplay men who do not pay, but you are downplaying women who use their children as chess pawns in custody battles to attack loving fathers.

Children should never be put between parents in a divorce as kids always find a way to blame themselves in such  adult matters.

Bendell’s children alerted the Pueblo Chieftain to their father’s history after Bendell was selected by Pueblo-area Republicans to run for the state house seat against Democrat Brianna Buentello.

The three children from Don Bendell’s first marriage claim their father was a “deadbeat dad” for nearly 17 years before he began paying court-ordered child support payments — after they were adults.

Bendell, the Republican candidate in House District 47, confirmed that he didn’t start paying the $500-a-month, court-ordered support until early 1997, but said his ex-wife had refused some earlier efforts to pay her and had “brainwashed” his children against him.

Britt Bendell, one of Bendell’s children, told the Chieftain:

“He never did anything for us, his three children from his first marriage. It took years before my mother was able to get any child support from him.”