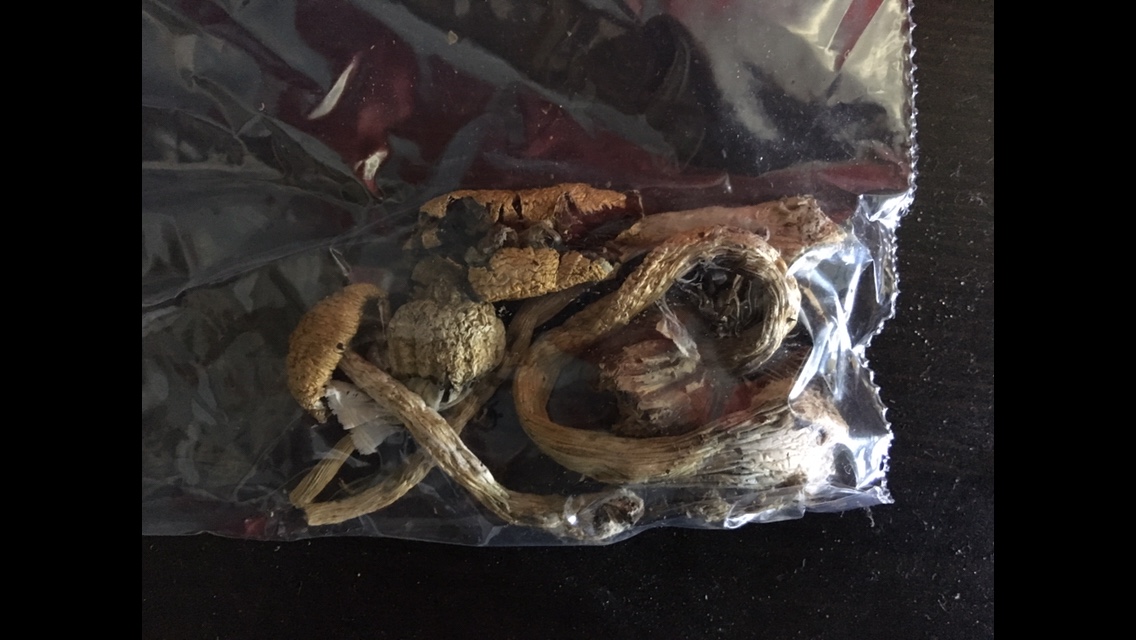 Grady Nouis, the Republican candidate for an Arvada area statehouse seat in the Colorado legislature, talks a lot about crime. He’s primarily concerned that so-called “sanctuary cities” endanger residents, because undocumented immigrants who may live in these cities commit crimes, particularly drug crimes.

In the summer of 2005, Nouis was arrested and charged with felony manufacturing of hallucinogenic mushrooms. He ultimately pled guilty to “maintaining a drug house” and possession of marijuana.

The arrest report, obtained by the Colorado Times Recorder via a source, explains how the police discovered Nouis’ suspected mushroom grow operation. He was living in a house owned by his parents in Grand Blanc, Michigan. They had moved to another city and were planning to sell the house in Grand Blanc. A realtor, believing their son to have returned to college, entered to prepare the house for a showing. She discovered numerous syringes and mason jars filled with a clear liquid and topped with plastic tubing. Believing she had discovered a methamphetamine lab, she called the police. After entering the property themselves, the police determined that it was a “psilocybin mushroom grow operation.”

“As we cleared the rest of the residence, we continued to find evidence of a psilocybin mushroom grow operation. We observed several dehydrating/drying units, packaged mushrooms ready for sale, the spores need to grow mushrooms a makeshift greenhouse made out of large plastic tubs with mushrooms growing along with various other items.”

According to court records, Nouis was initially charged with one felony count of “manufacture of psilocybin,” and one misdemeanor count of “possession of marijuana.” A plea bargain reduced the felony manufacturing charge to another misdemeanor, “maintaining a drug house.” Nouis was sentenced to three years of probation and paid fees and fines totaling $1,660. 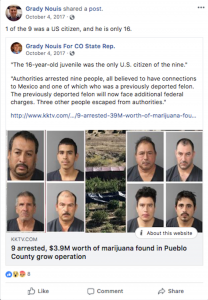 Nouis hasn’t addressed his criminal history publicly, other than noting at a public event that he “had a little too much fun the first four years” at his first college.

However, he regularly addresses criminal activity of undocumented immigrants. Nouis lists immigration as one of his top issues and his campaign statement makes it clear he’s focused on its impact on crime and public safety:

It pains me to see legal immigrant communities being used and abused by Democratic leadership.  These communities are dumped with higher rates of criminal activity, financial burdens, and lower rated school districts at the expense of turning a blind eye for “humanity.”  I want to protect all legal immigrant communities from these discriminatory practices by helping to provide them with the same judicial protections that all law-abiding Americans deserve.  I want all communities to be able to live under the highest safety standards and the only way to do that is hold consistent law and order across the board.

According to a recent study by the libertarian Cato Institute, undocumented immigrants are in fact substantially less likely than native-born residents to be arrested or incarcerated.

Nouis’ is a regular speaker during the public comment section of Westminster City Council meetings. Last February he railed against the council for ignoring his concerns about the city’s “Welcoming City” policy, which includes the a policy that “officers of the Westminster Police Department do not inquire about one’s immigration status unless it is somehow directly related to an ongoing criminal investigation.”

He attacked one council member directly, noting that the official’s law license had been suspended for a year by a disciplinary judge for various professional violations. Nouis stated that due to his license suspension the council member shouldn’t be allowed to hold office.

“[He] should not only be banned from practicing law but also barred from holding a position on city council, let alone have the gall to run for re-election after these findings.”

Just a week earlier, in response to a proposal to fund safe injection sites for IV drug users Nouis posted a number of policy grievances to Facebook, including his objections to drug use and illegal immigration: 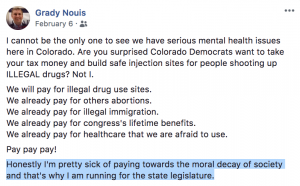 Honestly I’m pretty sick of paying towards the moral decay of society and that’s why I am running for the state legislature.

Last summer, Nouis attended and spoke at several far-right rallies organized by hate groups, events at which anti-immigrant sentiments were a primary theme.  He also reinforced his position on immigration and crime during a KLZ560 radio interview at the 2017 Western Conservative Summit. He related his recent public testimony at Westminster City Council objecting to what he sees as the city’s preferential treatment for undocumented immigrants. “It goes beyond equal rights,” he said. He noted that his objections angered the mayor, who has to approve his application to join any city advisory boards.

“How is somebody like me, who’s a law-abiding citizen, ever going to get a position on an advisory board because I spoke the truth.”

It is unclear precisely what he meant by “truth” or “law-abiding citizen.”

An phone call requesting comment from the Nouis campaign has not been returned. This article will be updated with any response.

CORRECTION: An earlier version of this article described the Cato Institute as “conservative.” It is now accurately characterized as libertarian.