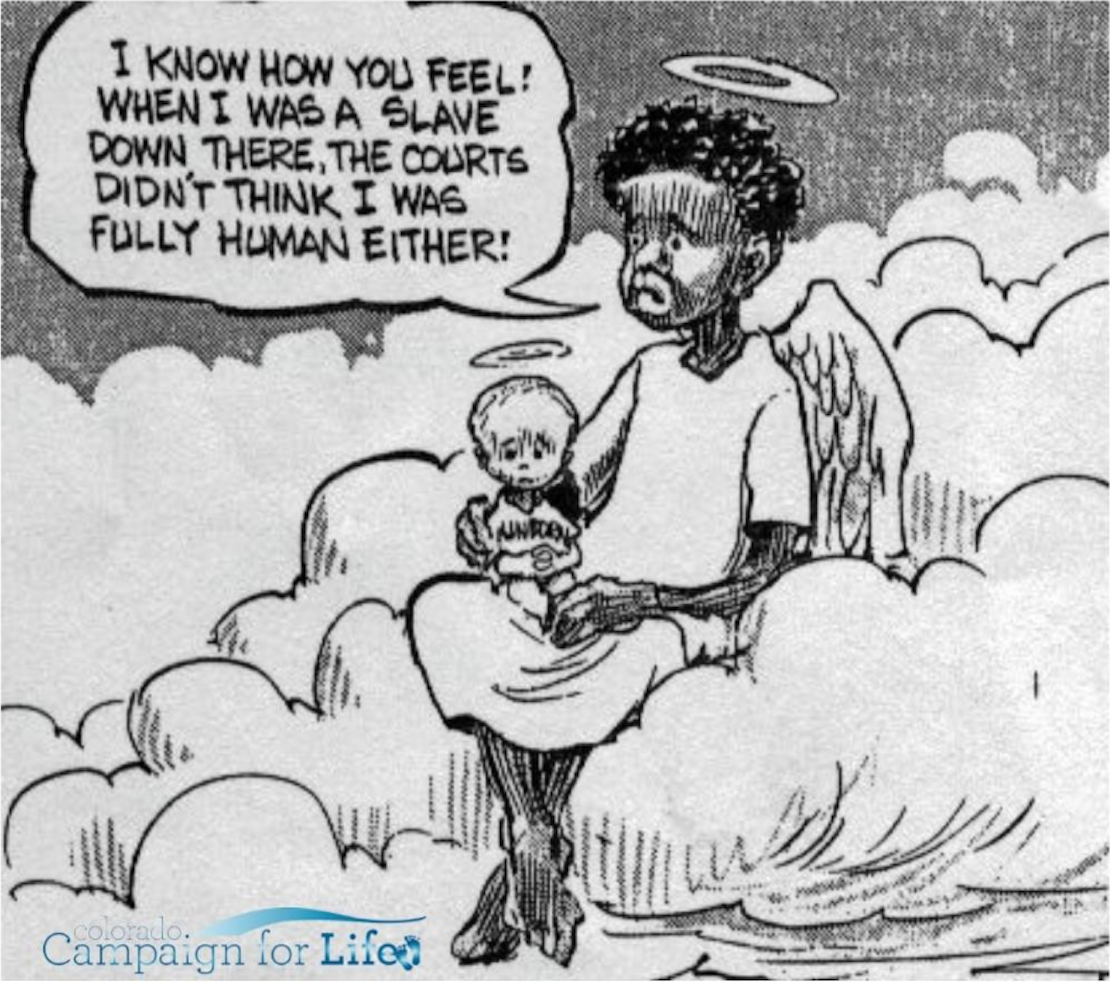 A leading Colorado anti-abortion group is promoting a cartoon deemed so racist that it was banned by the national anti-choice group that commissioned it 30 years ago. Colorado Campaign for Life (CCFL) shared the cartoon, which compares a slave to a fetus, on its Facebook page Monday: 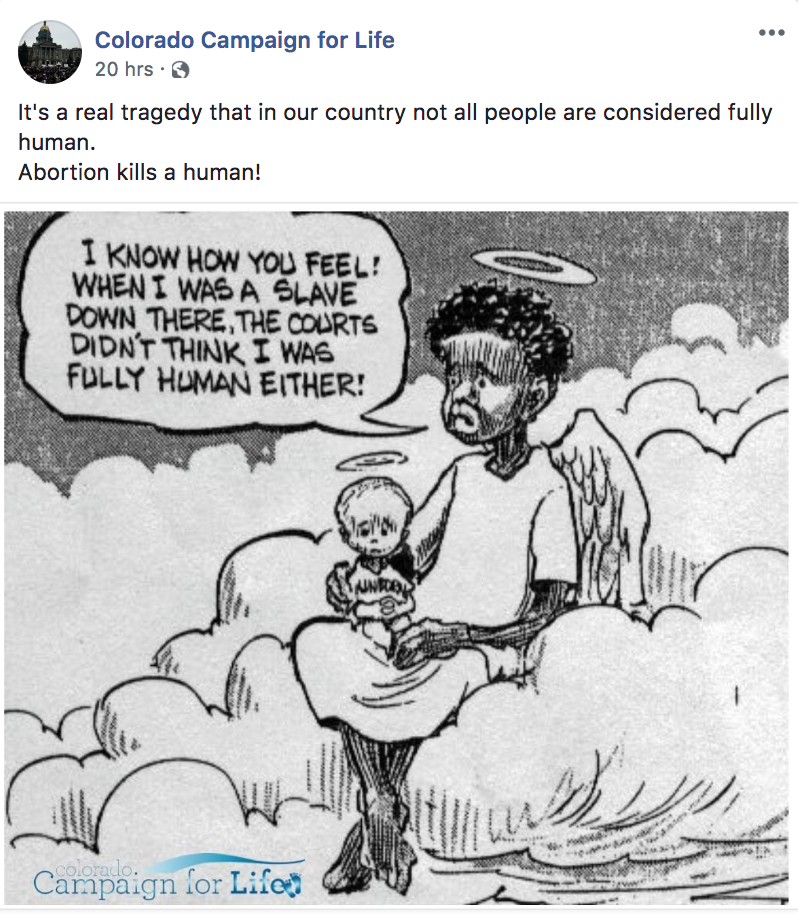 The cartoon, originally commissioned in 1988 by the group Presbyterians Pro-Life (PPL), is the work of former Colorado Springs Gazette editorial cartoonist Chuck Asay.

PPL was attending their church’s national conference and wanted to protest its pro-choice position by comparing abortion to slavery.

“…we contacted Chuck Asay, a Presbyterian brother who did editorial cartoons for the Colorado Springs Gazette, and asked him to do a series of cartoons showing the parallels between Dred Scott and Roe v. Wade, the oppression of slaves and the slaughter of the unborn…

A few blacks employed by men at the top of our denominational bureaucracy came onto the exhibit floor waving signs and shouting in front of our exhibit calling us “racist” for noting the parallel between the oppression of slaves and the slaughter of babies….

Media and television cameramen showed up for the shouting, and now that they were on TV, the shouters shouted more loudly about racism and demanded we… get rid of Chuck’s splendid cartoons—most specifically the one you see above. They hated it.”

Ultimately the PPL executive committee ordered Bayly to remove all of Asay’s cartoons from their conference booth and forbade any further reference to slavery in their advocacy efforts.

Asay retired from the Gazette in 2007, though he remained in national syndication until 2013. The Pikes Peaks Library District archived his work online, including this cartoon titled “Not Fully Human.” Unlike most other cartoons, however, this one does not list a publication date but is simply labeled “rejected.”

The version posted by Colorado Campaign for Life crops out Asay’s signature, so it’s unclear if CCFL knew the origin of the cartoon when it added its own logo and shared it on Facebook. Comparing abortion to slavery is now a common argument of anti-choice advocates.

CCFL is the most strident of the nonprofit advocacy organizations focused on anti-abortion advocacy at the capitol. It asks candidates for office to fill out a Campaign for Life Survey, and the organization runs paid mail and digital campaigns opposing those whose answers don’t match CCFL’s uncompromising positions on reproductive rights, regardless of party.

In 2014 CCFL targeted two Republican house candidates, Mario Nicolais and now-Rep. Lang Sias (R-Arvada) with identical ads comparing each of them to Kermit Gosnell, a Philadelphia doctor convicted of murdering infants. Both men lost their primary races. Sias, now the Republican Lieutenant Governor nominee, was later appointed to office and reelected in 2016, when he sponsored an anti-abortion personhood bill.

Those legislators with whom CCFL agrees, however, receive praise in the form of an award called “Pro-Life Legislator of the Year.” 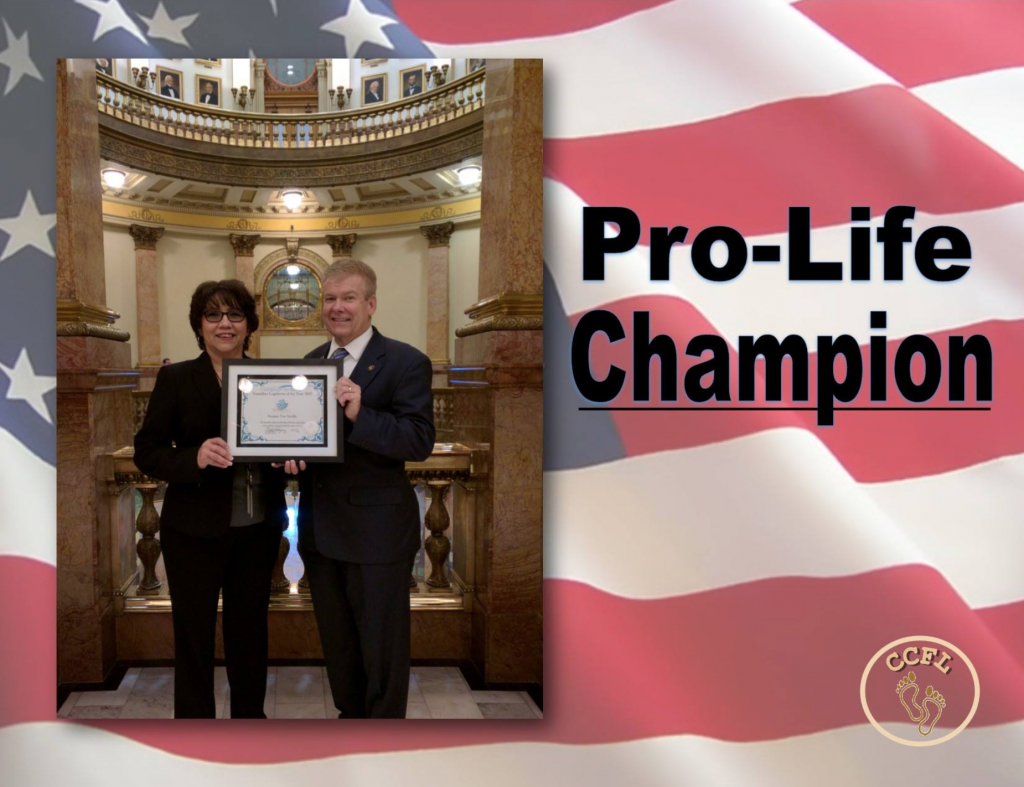