Tom Tancredo is always comfortable in front of a microphone, even when his words are making his audience uncomfortable. That’s exactly what the most prominent Republican to endorse Walker Stapleton did July 30 at the Jefferson County Republican Men’s club, when he delivered racist comments about black student athletes at his alma mater, Northeastern Junior College.

Musing about the racial and religious quotas imposed on his college’s dormitories by the Klan-influenced local government, Tancredo, a former Congressman, wondered why the restrictions didn’t apply to the whole school rather than just the students at the residences:

Tancredo: “I always wondered, why just the dorms? If you’re gonna have a quota, why not on everything. I dunno, they needed black players, I guess, on the team.”

The anti-immigrant firebrand’s influence with the GOP base is exactly why Stapleton asked the conservative icon to introduce and nominate him at the Republican state assembly. That said, Tancredo’s remark about the Klan’s relaxed racial quota when it came to black athletes fell flat on the conservative audience, which appeared to be shocked by the comment.

Undeterred, he stuck with his racist theme by promoting “a great book,” Losing Ground by Charles Murray, which argues for abolishing welfare. The sociologist has also argued that African-Americans tend to be less intelligent than white Americans and that genetic differences between the races are partially responsible. Current Affairs magazine wrote an extensive profile of Murray’s racist writings in a feature piece, “Why Is Charles Murray Odious?” Tancredo acknowledged the author’s controversial status, noting, “Of course, everyone gets scared the minute you say his name.”

Yet he proceeded to rattle off statistics from the book, showing a decline in numbers of traditional nuclear African-American families and an increase in “black-on-black murders” since the 1950s and ascribing that decline to “the war on poverty.” “[The government] started paying people not to have a male in the household.”

He went on to claim that African-Americans “used to have a higher commitment to Christianity than whites,” but “that’s all changed and it was because of the destruction of the family structure.”

Ever since Walker Stapleton used Tancredo’s name and brand to secure the Republican nomination however, pundits have noted that ultra-conservative firepower that proved so useful before the primary will likely become a liability in November.

Mike Littwin made this exact point in his July 25 column in the Colorado Independent, writing “Enter Tancredo, who was brought in to help Stapleton appeal to the assembly’s right-wing fringe. It worked then. But how about in November?”

Littwin’s argument matched that of pundit Eric Sondermann, who a month earlier on RMPBS Colorado Inside Out said,

“I think Walker Stapleton is making a number of strategic errors here… To have Tom Tancredo give his nominating speech at the convention in Boulder…you don’t think that one will come back to bite him come September, October, etc.? In tennis, it’s called ‘unforced errors.’” 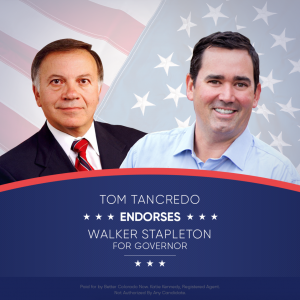 In his speech nominating Walker Stapleton to Colorado Republicans at the state assembly in April, Tancredo gave two reasons for his presence.

First he said it was because “the day after the election, I want to see all those liberal looneys running with their heads in their hands, looking for a safe space because they can’t handle what just happened to them.”

He concluded by saying, “the only reason I am here and I am proud as I can be to do it, is to place into the nomination for the Republican governor of Colorado, Walker Stapleton.”

If Tancredo continues to make blatantly racist statements in public and the pundits are correct, then some people will indeed have their heads in their hands November 7, just not the ones Tancredo is thinking of.