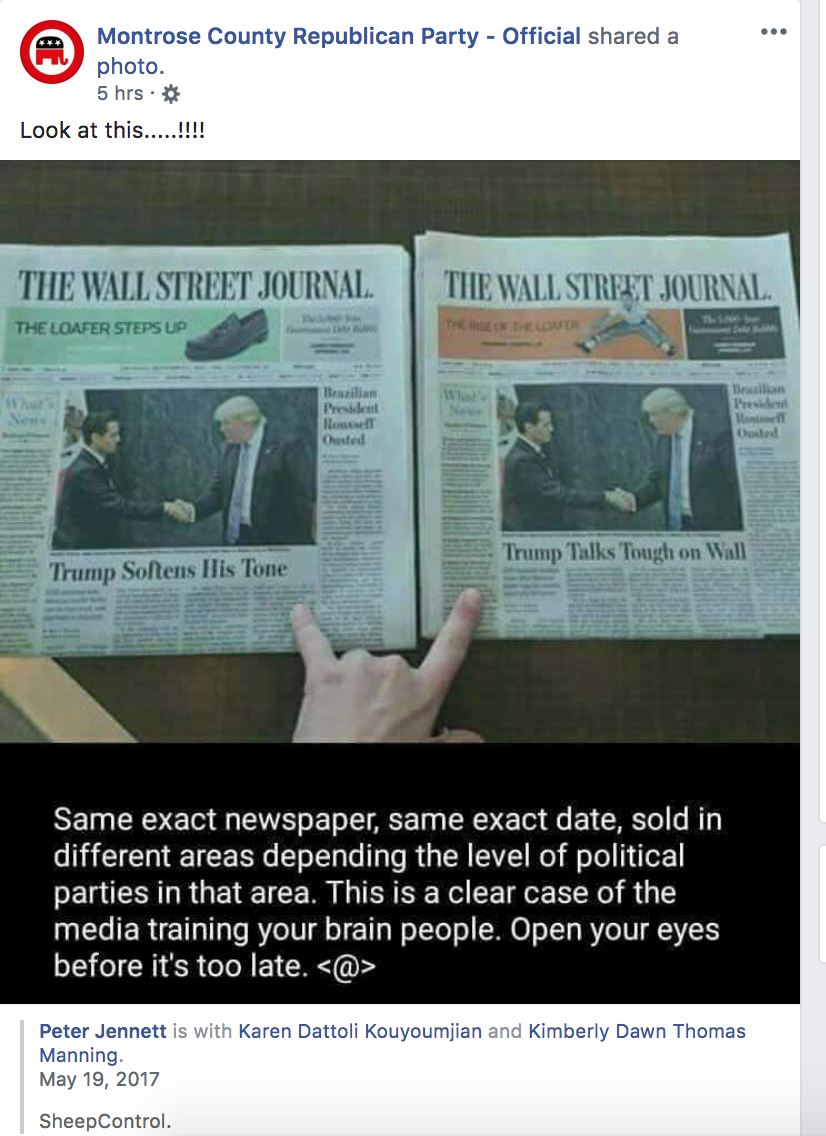 It’s the kind of conservative Facebook post you might roll your eyes at and move on, except it was posted just before last week’s murder of five staffers at a Maryland newspaper.

“Look at this….!!!” wrote the Montrose County (western Colorado) Republican Party on its Facebook page, referring to a meme showing two editions of the Wall Street Journal with two different headlines about the same story.

“Same exact newspaper, same exact date, sold in different areas depending on the level of political parties in that area,” states the meme (on your right). “This is a clear example of the media training your brain people. Open your eyes before it’s too late.” [emphasis added]

Except it’s not the “media training your brain people.”

As explained by the nonpartisan fact checker Snopes, newspapers print different editions at different times during the day, and sometimes the headlines and content changes as stories develop:

This image was passed around on the Internet accompanied by the claim that the Wall Street Journal had deliberately published one headline, “Trump Softens His Tone,” in a pro-Trump market area in an attempt to sway readers away from the the GOP nominee, and the other headline, “Trump Talks Tough on Wall,” in a non-Trump market area to bolster support for Democratic presidential nominee Hillary Clinton.

However, these opposing headline editions were not distributed to different political or geographic markets, nor were they intended to influence voters.

This picture shows two editions of the Wall Street Journal published at different times of the day. The paper on the left came off the press early in the day, while the paper on the right was produced later in the day. Print newspapers sometimes undergo revisions throughout their daily runs and typically employ marks to distinguish the various editions — in this case the differing WSJ editions are distinguishable by the number of stars displayed in the masthead:

You hope that the Montrose Republicans remove the WSJ meme from their website, and I’ve asked them to do so. No response.

In any case, they’re a Colorado example of a problem that’s obviously stoked by conservatives across the country, starting with Trump and his “fake news” propaganda.

They’re not only trashing the profession of journalism, which is bad enough given how much we need reporters to hold Trump and every other politician accountable.

But they’re also putting working-stiff journalists at risk. I’m not going to blame the deaths at the Capital newspaper in Maryland on the rhetoric of conservatives. But it creates a hostile climate for journalists, to be sure, which is not deserved or supported by the conservatives who are doing the attacking.

And, again, it de-legitimizes the essential profession of journalism.

Take Colorado Sen. Cory Gardner, who said last month the media wants conservatives to “fail.” His evidence for this? Zippo.

Gardner has also said, without evidence, that the “press” is biased against conservatives like him. And he blamed the media for Mitt Romney’s loss to Obama in 2012.

If you watch FOX News or follow politics at all, you know that evidence-free news-media bashing plays a leading role in the Republican playbook, going back way before Trump.

So you wonder what conservatives have to say to the journalists in Maryland, like the Capitol newspaper’s website editor, who defended his besieged profession after the shooting last week. The Washington Post reported last week:

Jimmy DeButts, an editor for the [Maryland newspaper’s] website, published a tribute on Twitter about the craft of his fellow journalists, with a nod to the struggles of many local newspapers to continue working under tough economic conditions.

DeButts added: “We are there in times of tragedy. We do our best to share the stories of people, those who make our community better. Please understand, we do all this to serve our community.”

I’m hoping journalism–and our country–prevails, and I read about Trump’s and Gardner’s demise in my local newspaper.

Correction: This post was corrected to reflect the fact that Montrose is in western Colorado.