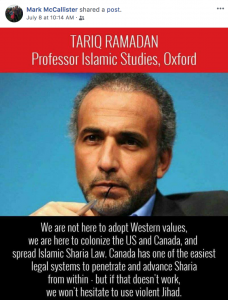 Leading the way is the Mesa County Republicans Vice Chair Mark McCallister. On July 8 he shared a meme with a fake quote attributed to controversial Oxford professor of Islamic studies Tariq Ramadan. The statement in part read

“We are here to colonize the US and Canada and spread Islamic Sharia Law. Canada has one of the easiest legal systems to penetrate and advance Sharia from within, but if that doesn’t work, we won’t hesitate to use violent Jihad.”

Scary stuff indeed, but he never said it. Snopes debunked the meme back in February, with it post “Did a Muslim Scholar Advocate ‘Colonizing’ U.S. and Canada with Sharia Law?” The fact-checking site rated the claim “False.”

McCallister also shared a post by the Mesa County Republican Party that featured a photoshopped image falsely depicting an Antifa supporter attacking a police officer.The link itself connected to an opinion piece, but the image the author used to promote the column on Facebook was debunked by Snopes last summer: “Antifa Member Photographed Beating Police Officer?” The original image is from a 2009 riot in Greece.

Ironically, the writer promoting his opinions with this patently fake image describes his website as “an antidote to the endless extremism and dishonesty that is currently coming out of the Far Left and also the Far Right.” 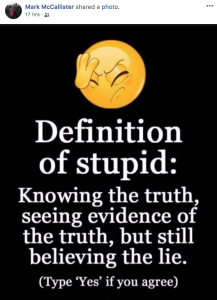 Speaking of irony, here is another more recent post from the Mesa County GOP Vice Chair. It is posted without comment.

Chaffee County Republicans managed to take fake news posting to a new level by posting a fake meme about the fact-checking site Snopes. The meme purported to show two images of George Soros shaking hands with Snopes founder…except that neither man next to Soros is Snopes’ CEO, but rather, a couple of other easily identifiable white guys. Nevertheless the image circulated enough that Snopes felt the need to address it, which it did in a post titled “Was Snopes.com ‘BUSTED’ for Our CEO’s Ties to George Soros?” Short answer: No, because there are no ties.

Finally, Tom Tancredo’s latest anti-immigrant project, Citizens for Secure Borders, shared a Daily Caller news story with clear falsehood in its title: “Illegal immigrant arrested for starting string of Colorado fires that charred 40K acres.” The story covers the arrest of Jesper Joergensen, a Danish man living in Colorado on an expired visa, for starting the devastating Spring fire. That coverage is accurate, as are the following paragraphs about the other wildfires burning throughout the state. 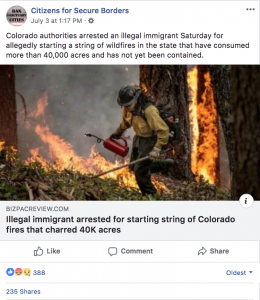 The headline, however, accuses Joergensen of starting a “string of wildfires,” which is clearly false.

This doesn’t quite meet the Times Recorder’s standard for fake news, as the Daily Caller article hasn’t been debunked by an official fact-checking site such as Snopes or Politifact, but it is nevertheless false. Furthermore, The Tancredo group’s post repeated the false accusation in its own blurb about the article. Considering that this is about arguable the largest news story in Colorado, a local group such as this should know better.

Tancredo himself has a mixed record when it comes to addressing false or inaccurate posts. He has removed at least one fake news post from his Facebook page once it was pointed out to him by the Times Recorder, but has ignored other requests, including one from 9News’ Kyle Clark to “apologize for spreading a falsehood.”