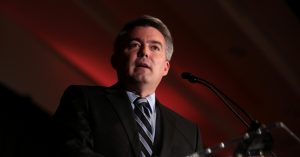 At an afternoon stop in Ft. Collins, Gardner said:

Stapleton’s embrace of Gardner raised eyebrows among some political insiders, who pointed that Stapleton’s association with Gardner could actually cost the GOP nominee votes.

They point to a poll earlier this year, which showed dismal approval ratings for Colorado’s junior U. S. Senator, who’s drawn a steady stream of protesters this year as he’s sided with Trump on legislation to kill Obamacare, revamp the tax code, and more. ColoradoPolitics reported on Gardner’s popularity.

The survey suggests only 25 percent of Coloradans approve of Gardner’s job performance — likely tied to the Republican president’s unpopularity in Colorado — down from 43 percent in 2016.

“Not only is Gardner’s overall approval ratings very low among Democrats (12 percent) — as we might expect — but he scores quite poorly among Independents (23%) and even lacks majority approval among Republicans (46%),” the report states.

Stapleton is hitting the campaign trail with Gardner to try to solidify the support of base Republican voters, whose turnout is absolutely essential to Stapleton’s chances of winning in November, analysts say.

That’s because Democrats look like they are highly motivated to vote, and unaffiliated voters, who represent about a third of the electorate in Colorado, are breaking to the Democratic Party, judging from voting data from Colorado’s June primary election.

Thus, Stapleton must find a way to inspire Republicans to go to the polls, and Friday’s photo ops with Gardner appear to be part of that strategy. Stapleton’s embrace of Trump during the GOP primary is part of the same effort to woo base Republicans.

For his part, in multiple speeches Friday, Stapleton spent less time thanking Gardner than he did attacking his Democratic opponent, U.S. Rep. Jared Polis of Boulder.

Among other things, Stapleton decries Polis’ environmental positions, arguing that they are too expensive.

Most of these demonstrations focused on Gardner, who will be voting on a Trump appointment to fill a U.S. Supreme Court vacancy.

Protesters were concerned that adding another conservative judge to the court will lead to the gutting of Roe v. Wade, the law that guarantees abortion rights to women.

One protester in Colorado Springs was quoted as saying,

“Thinking of my daughter not growing up with the same rights I have … it’s terrifying,” she said, holding back tears.