At their first annual conference in Colorado last weekend, Democrats for Life of America (DFLA) was greeted with a clear message from Colorado Democratic lawmakers and reproductive rights advocates: abortion access is a progressive value.

That message was repeated often during a press conference and displayed prominently on a billboard outside the weekend-long event at the Radisson Hotel in Aurora.

“I wish we were here talking about real progressive issues and how we can move Colorado forward,” said State Rep. Jovan Melton (D-Aurora). “But instead, we’re here talking about an issue that has not only divided our country for years, but now is all of a sudden trying to divide our party.” 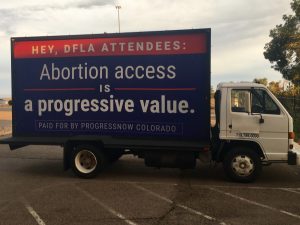 “Our Democratic values are not up for debate,” said State Rep. Leslie Herod (D-Denver), adding that reproductive choice is an essential part of the party’s platform. “We and our voters know that access to an abortion is not just a women’s issue. It’s an economic issue, a health care issue, a queer issue, and so much more.”

“If you don’t stand for those things, you are not a Democrat,” said Herod. “Show me your party registration.”

NARAL Pro-Choice Colorado’s Karen Middleton pointed out that many speakers at the DFLA conference, called the “I Want My Party Back” conference, aren’t even Democrats.

“They’re here under a ruse,” said Middleton. “But we know that the folks that live here in the city of Aurora and across the state of Colorado support access to abortion care and don’t believe in this false narrative that we’re seeing here today.”

“What really this comes down to is the right for all of us to control our bodies, our lives, and our futures,” said Fawn Bolak of ProgressNow Colorado, the organization that paid for the billboard. “Limiting these rights is not progress.”

DFLA distributed a letter to attendees asking them to “not engage” with the “pro-abortion group,” but several DFLA speakers and event-goers ignored that request, shouting things like “abortion is violent” throughout the press conference.