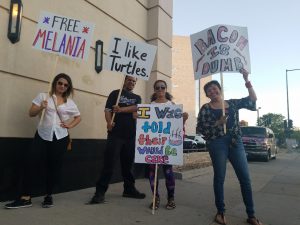 “We’re part of the show,” one said when asked who they were with and what they wanted.

Inside the strip club, the show hit high gear when “American Woman” blasted across the bar and Stormy Daniels, who claims to have had an affair with Trump, jumped onto one of the venue’s circular dance floors, wearing American-flag-decorated shorts and top, which she later removed as the sold-out crowd roared and threw out a swirl of dollar bills.

“Ladies and Gentlemen, it is the moment you have all been waiting for. Batten down the hatches and hold on tight. Things are about to get stormy,” said the announcer as the sound of thunder rumbled across the club just before Daniels appeared.

“Her major TV credits include every major media outlet… Her 60 Minutes interview was the most watched in the past 10 years. That’s right. Ten years. And Stormy Daniels is the first-ever Penthouse Pet of the Century,” he continued.

Then Daniels’ voice could be heard. It was a clip from her 60 Minutes interview, during which she described the time she allegedly had sex with Trump.

“Why don’t you take that magazine and spank me with it,” the audio replayed a memorable line from 60 Minutes during which Daniels explained how it came to pass that Trump allegedly spanked her with a Fortune magazine that had Trump on the cover.

The crowd, many smoking cigars, didn’t react at all to the Trump reference, and the announcer moved into, “And now, make some noise for Stormy Daniels.”

Daniels jumped up and down, waving her arms, pulled spectators into her breasts, laid down and raised her legs, rolled around, and more.

After her 15 minute dance, Daniels was made available for photographs and questions near the bar area.

Daniels is at the center of a major Trump scandal, with questions lingering about whether Trump’s fixer attorney paid Daniels hush money that may have been obtained from a Russian oligarch. Trump has said he footed the bill.

Editor’s note: The author of this article attended the event with his book group and brother, strictly in an effort to understand the state of American politics and culture. In fact, the show proved to generate as much discussion as any of the books we’ve read. One member of the book group elected not to go. The author’s wife went reluctantly and left early. The author is wearing his red, white, and blue Diamond Cabaret wristband to prove that he attended.