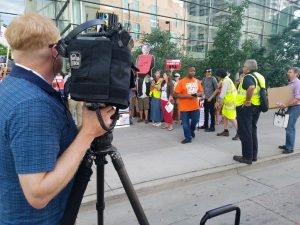 Over a hundred people gathered in front of a major gathering of conservatives Saturday at the Colorado Convention Center, calling for the passage of gun-safety legislation and denouncing conservative comments by featured speakers at the event.

“Many people dismiss this convention, [which is called the Western Conservative Summit,] as a right-wing ideological pep rally, and that’s what it is,” said Katie Farnan with Indivisible Front Range Resistance. “And some people said we should just dismiss it. There are couple reasons we are not just dismissing it. The biggest is, every single gubernatorial candidate and attorney general candidate on the GOP side in this summit.”

“We have better speakers out here [on the sidewalk]” Farnan said, introducing Tay Anderson, President of Never Again Colorado.

“We are here to say in one voice that we want to be safe in our schools. We are just telling them in one voice that we are not advocating to take your guns away. We just want our teachers to be able to continue to teach. We want students to be able to learn. We don’t want to be gunned down in our schools. And it doesn’t matter if you are a Republican or a Democrat. We need you to fight with us, because this is an American issue. Are you ready to fight with us?”

Anderson introduced Mike Heyka, who said he’d been a hunter his whole life, since his youth in Kansas.

“I’m a hunter now, and I own guns,” said Heyka, “I am for common-sense gun laws. I am pro-Second Amendment. I am saddened and shocked when I see news of mass shootings. As a gun owner and patriotic American, I am ashamed at the poisonous rhetoric and tribalism stoked by the NRA and Rocky Mountain Gun Owners.”

Heyka thanked Republicans and Democrats, including Colorado state representatives Cole Wist (R-Centennial) and Alec Garnett (D-Denver), for supporting a bill that would have allowed law enforcement officials to take guns from people deemed by courts to be a danger to themselves or others. 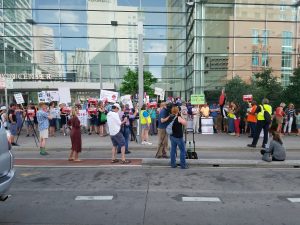 The Western Conservative Summit was sponsored by the Centennial Institute, an off-shoot of Colorado Christian University.