It’s the latest development in the push to change the name of the neighborhood itself, which references former Denver Mayor Benjamin Stapleton, who was closely involved with the Ku Klux Klan and used Klan power to get elected in the 1920s. 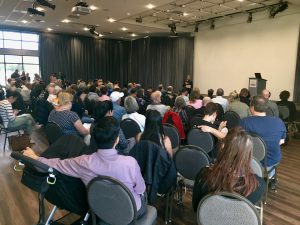 Some of the hundreds of attendees had never before attended a SUN community meeting, and showed up to this one specifically to support the proposed name change. That’s the case for Patricia Springer, who said she thinks it’s “time to declare that we want to be a diverse neighborhood” and “make people of color feel welcome.”

“I think this is the moment in history when we have to take a stand, and it’s a small thing,” said Stringer. “I think it’s the least we could do.”

Ying Ong also strongly supports a name change. “We’re taking a stance that it’s not all right and that someone who was part of KKK should not be recognized in this way. It’s one thing to remember that history, but we don’t need to celebrate it.”

Jim Edwards, on the other hand, wants to keep the name Stapleton, and called the movement to change it “absurd.”

“This guy was a member of the KKK, what, 80 years ago? Who cares?” asked Edwards. “And how far do you take this absurdity? Is Washington Park next?”

Jim’s wife Carmen agreed. “I’m not ashamed of the name Stapleton, because there’s a lot of good things associated with it too,” she said. “We all have baggage.”

Current Republican gubernatorial frontrunner Walker Stapleton, who’s former Mayor Benjamin Stapleton’s great-grandson, hasn’t brought up his family’s legacy during his current campaign. But he once praised his great-grandfather’s “accomplishments” during his campaign for state treasurer.

RELATED: “Stapleton accused of paying off history museum to remove family’s KKK past from exhibit”

Ong expects that Walker Stapleton will have to answer for his family’s white supremacist legacy during his campaign for governor.

“I think people are going to ask him about it, so I don’t think he can avoid it,” said Ong. “He’s going to have to make a stance, so it’s going to be up to him how he wants to represent himself.”

Springer said she’s not sure if it’ll come up, but said she assumes he’d want to “make his own statement that his politics aren’t like that.”

Liz Stalnaker, who’s part of the Rename St*pleton For All group, pointed out that Stapleton was never meant to be a permanent name in the first place, and while there’s been a recent resurgence of action and awareness around the origins of the name, it’s always been a source of controversy.

“The name has been problematic ever since the development broke ground,” said Stalnaker.

As the North East Denver newspaper The Front Porch reported in 2015, the name Stapleton was used as a “locator” for marketing the new development in 2001, but due to community concerns about the name’s implications, it was never supposed to be a primary name, and the expectation was that smaller neighborhood names would eventually take over and diminish the use of Stapleton.

Stalnaker also dismissed concerns that removing the name Stapleton would result in a whitewashing of history or cause people to forget about Denver’s ugly history of racism.

“It’s because of groups like Rename St*pleton for All, like Black Lives Matter 5280, that we’ve even been talking about this,” she said, adding that there are better ways to preserve history.

“Everyone says they want to be more welcoming and inclusive, but the demographics of this neighborhood tell a different story,” Stalnaker said.

It’ll take a two-thirds majority to change the name, but Stalnaker says regardless of the outcome of the vote, the movement still will have been a success. “We’re finding allies we didn’t even know we had,” said Stalnaker.

Organizers say the neighborhood association isn’t likely to announce the results of the vote until next month’s community meeting.

Voting took place from 6 p.m. to 8:30 p.m. at the Cube community center on Northfield Blvd., where 450 residents cast ballots.