Why Is a Militia Group Raising Money for Marshall Fire Victims?

Back in April, KNUS radio host Craig Silverman reported that GOP gubernatorial candidate Doug Robinson favored the “red flag” bill under consideration in the Colorado legislature, which would have allowed law enforcement officials to ask the courts for permission to seize guns from people who are deemed to pose a “significant risk” to themselves or others.

During a debate Saturday, presented by the Gazette/ColoradoPolitics/El Pomar, Robinson said:

Robinson: “We have to have the courage, we have to lead on a red-flag bill that makes sense. This last one did not. It did not have the due-process protections. But we could lead and make sure that guns are not in the hands of the mentally ill.” 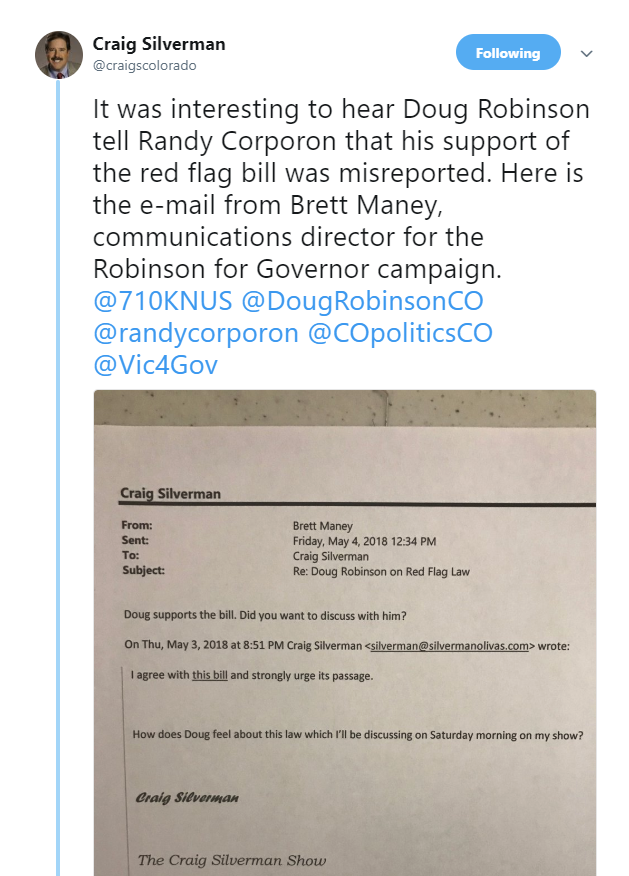 “Doug’s been consistent in saying he supports Red Flag laws (something that he very clearly stated in the debate) and that he would support one with the proper due process protections in place,” said Maney. “He was disappointed that the bill was killed without any attempt to make those necessary due process changes, but without those changes, he thinks it’s better that it was killed.”

After hearing Robinson’s claim that he opposed Colorado’s red-flag bill, Silverman tweeted a photo of an email from Maney stating, “I agree with this bill and strongly urge its passage.”

Asked about Silverman’s email, Maney told me, “I assumed Craig was reaching out to get Doug on to discuss his support of the bill, so I didn’t detail his full position.”

During Saturday’s debate, Robinson also said he backs an “armed person in every school,” and he wants to “harden our schools,” citing a tool kit for greater school safety.

“We know the Democrats’ plan,” he said. “They want to take our guns away.”

Here’s a taste of the debate on the radio, which includes an appearance from former lawmaker Victor Mitchell, who supported the red-flag bill at the Capitol this year.

Here is Robinson’s full comment about school safety and the red-flag bill.