Weld Sheriff: I’d Rather Take My Risk With the Virus Than Socialism 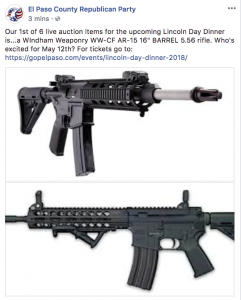 We know some people want to have their own military-style semi-automatic AR-15 assault rifle.

Despite the devastation this firearm inflicts on the human body, compared to that of a handgun, U.S. Rep. Ken Buck (R-CO) defends the rifle’s use for “pests,” like raccoons. Former State Sen. Laura Woods (R-Arvada) wants hers for killing coyotes.

But this was the weapon used to murder 17 high school students in Parkland, Florida, so you’d think that, even if you loved the AR-15, you wouldn’t trot it out for the world to see at this particular moment in history.

So why is the El Paso County Republican Party offering an AR-15 as one its first of six “live auction items” at its big Lincoln Dinner annual fundraiser, set for May 12 at the Antlers Hotel in downtown Colorado Springs.

I put the question to the chair of the El Paso County Republican Party, Joshua Hosler.

“Actually, we’re auctioning off two AR-15s, not one,” he replied. (I have to admit we had a laugh together at that response.)

“It’s not the weapons that are the problem,” he continued. “We have a human problem. To me, it’s a cultural problem.”

“I have a unique perspective,” he said. “I was in the infantry in the Marines, as a team leader in Iraq and Afghanistan, and I saved hundreds of people’s lives with the M-4, which is the military equivalent of the AR-15. We stopped a lot of horrific things from happening. It’s personal, and very important to me. It’s my job to protect my family and my country. We have the best constitution in the world, and it allows people to have different opinions. And I’m proud of that. So you and I can disagree, and we don’t have to worry about anybody coming after us for doing it.”

In addition to the AR-15s, El Paso Republicans will also be auctioning off a painting for the Fallen Peace Officer Memorial, Hosler added.

The speaker at the dinner, by the way, who will likely precede the AR-15 auction, is U.S. Rep. Jim Jordan of Ohio, who reportedly packs heat.