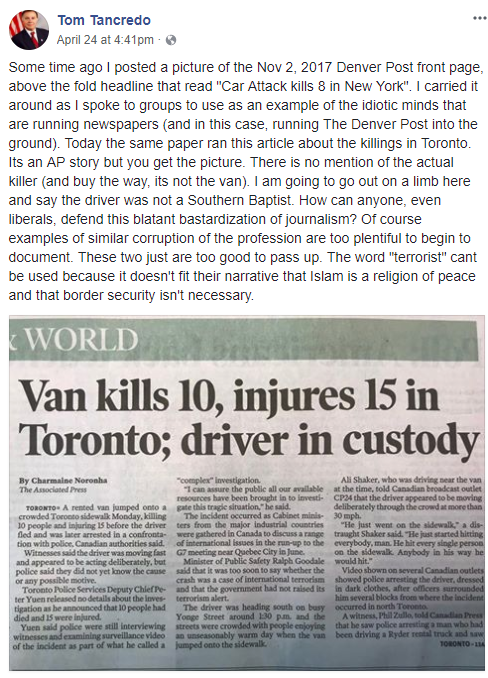 In April after a man drove a van onto a crowded sidewalk in Toronto, former Republican Congressman Tom Tancredo became a media critic on Facebook, writing that The Denver Post’s headline about the incident left out a key fact.

“There is no mention of the actual killer (and buy the way, its not the van),” Tancredo commented on Facebook. “I am going to go out on a limb here and say the driver was not a Southern Baptist. How can anyone, even liberals, defend this blatant bastardization of journalism? Of course examples of similar corruption of the profession are too plentiful to begin to document. These two just are too good to pass up. The word ‘terrorist’ can’t be used because it doesn’t fit their narrative that Islam is a religion of peace and that border security isn’t necessary.” [Emphasis added.]

But it turns out, the driver of the van wasn’t an Islamic extremist but some guy, who seems mentally ill.

Tancredo told me he doesn’t care, and he doesn’t regret his bigoted implication that the driver of the van was a Muslim.

The incident shows why journalists don’t speculate about a suspect before they can find out the facts, so that people don’t turn against Muslims, Jews, or minorities. Or you, at some point, for that matter. It’s partly how journalists facilitate civil, rational debate. It’s how you build a tolerant, respectful community.

But all Tancredo wanted to talk about is the headline, which he thinks should have read, “Van driver kills 10.” That’s what he wanted it to say.

No problem with the headline, in my opinion, but Tancredo’s inability to own up to his own bigotry toward Muslims, when the facts irrefutably exposed him. That’s where the problem is.