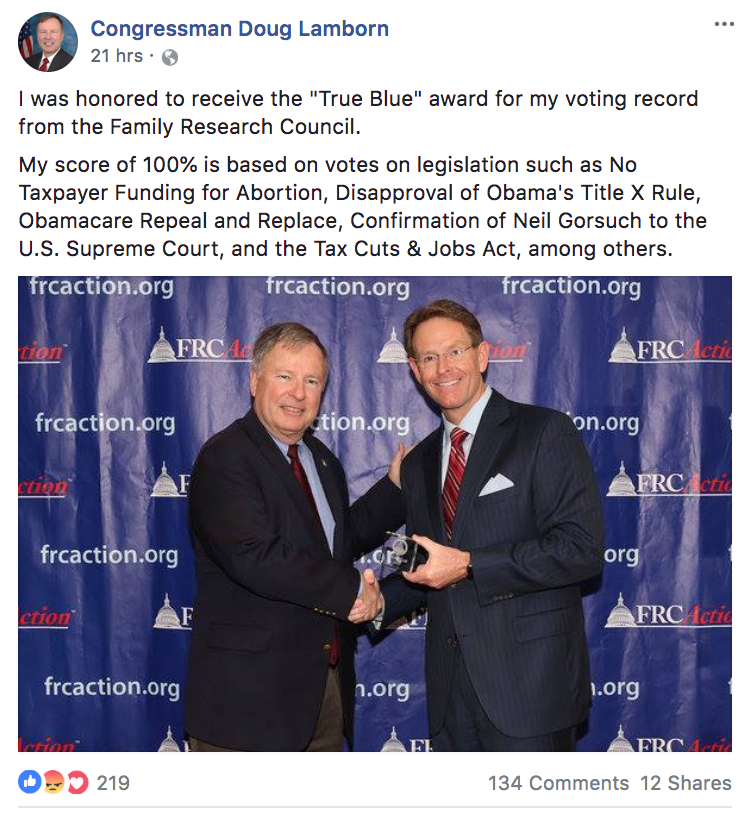 U.S. Rep. Doug Lamborn (R-CO) told his Facebook friends last week that he was “honored to receive the ‘True Blue’ award for my voting record from the Family Research Council (FRC).”

“My score of 100% based on votes on legislation such as No Taxpayer Funding for Abortion, Disapproval of Obama’s Title X Rule, Obamacare Repeal and Replace, Confirmation of Neil Gorsuch to the U.S. Suprime Court and the Tax Cuts & Jobs Act, among others,” wrote Lamborn.

Lamborn did not inform his Facebook readers that Family Research Council is designated as a “hate group” by the Southern Poverty Law Center (SPLC), which is widely regarded for its work tracking extremism in America:

“The FRC often makes false claims about the LGBT community based on discredited research and junk science,” states the SPLC website. “The intention is to denigrate LGBT people as the organization battles against same-sex marriage, hate crime laws, anti-bullying programs and the repeal of the military’s ‘Don’t Ask, Don’t Tell’ policy. To make the case that the LGBT community is a threat to American society, the FRC employs a number of ‘policy experts’ whose ‘research’ has allowed the FRC to be extremely active politically in shaping public debate.”

Right-wing groups have attacked the SPLC in recent years. On its website, the Family Research Council states that the “SPLC has over time fashioned itself into a political referee while simultaneously engaging in progressive activism, using smear tactics, intimidation, and a knack for fundraising to silence its political opponents.”

The SPLC describes its work as “monitoring the activities of domestic hate groups and other extremists – including the Ku Klux Klan, the neo-Nazi movement, neo-Confederates, racist skinheads, black separatists, antigovernment militias, Christian Identity adherents and others.”

The bills cited by Lamborn in his Facebook post above take aim at abortion-rights and access to healthcare, among other things, but the Family Research Council is best known for its stance against marriage equality.