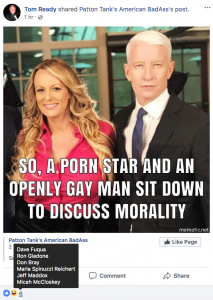 The chair of the Pueblo County Republican Party says her recent “like” of a Facebook meme should not be interpreted as an attack on gay people.

Asked if she meant to call into question the morality of Cooper, Marla Spinuzzi Reichert said via text message:

Told that a reader thought she might have been joking, Reichert replied,

“Thanks for pointing out how it could be misread. I have always stood up for the gay community, and back in the day, I helped people see that regulating marriage is not the proper role of government. I am all about limited government and maximum freedom.”

Reichert would face strong headwinds in convincing her fellow Republicans in Colorado that gay marriage should be free and legal.

The Colorado State Republican Party platform explicitly states that it’s the role of the judiciary, preferably at the state level, to decide whether to ban same-sex marriage:

Colorado GOP Platform: Defending Marriage Against an Activist Judiciary: Traditional marriage and family, based on marriage between one man and one woman, is the foundation for a free society and has for millennia been entrusted with rearing children and instilling cultural values. We condemn the Supreme Court’s ruling in United States v. Windsor, which wrongly removed the ability of Congress to define marriage policy in federal law. We also condemn the Supreme Court’s lawless ruling in Obergefell v. Hodges, which in the words of the late Justice Antonin Scalia, was a “judicial Putsch” — full of “silly extravagances” — that reduced “the disciplined legal reasoning of John Marshall and Joseph Storey to the mystical aphorisms of a fortune cookie.” In Obergefell, five unelected lawyers robbed 320 million Americans of their legitimate constitutional authority to define marriage as the union of one man and one woman. The Court twisted the meaning of the Fourteenth Amendment beyond recognition. To echo Scalia, we dissent. We, therefore, support the appointment of justices and judges who respect the constitutional limits on their power and respect the authority of the states to decide such fundamental social questions.

Last month, the Jefferson County Republican Party passed by 72 percent a resolution backing “traditional marriage between one man and one woman,” though the Jeffco Republicans stopped short of calling for laws to ban same-sex marriage.

But last month, the Adams County Republican Party did just that, proposing a resolution to the 2018 Colorado Republican Party Platform stating, “The state has a rational interest in reserving the recognition of marriage to [the union of one man and one woman] instead of recognizing as marriage the relationships between adults of any gender or number.”