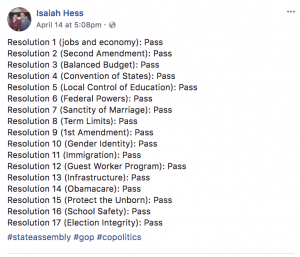 On guns, Colorado Democrats back “individual ownership of firearms for hunting and personal safety,” but they would, among other regulations, “ban assault weapons, bump stocks, and high capacity magazines” and increase the age for purchasing a firearm to 21.

Colorado Republicans “affirm the right of all peaceable and law-abiding individual citizens to keep and bear arms of their choice without any degree of prior restraint.”

State Democrats “support measures that promote equality for, and non-discrimination against, gay, lesbian, bisexual, transgender, and queer people in all aspects of their lives” while the state GOP advocates for “marriage exclusively as the union of one man and one woman” and asserts that the state has a “rational interest” in defining marriage as such.

On abortion, the state Republican Party supports personhood, which states that a “person’s unalienable rights begin at conception and continue until death.” This stance, if enacted into law, would translate to a ban all abortion and possibly some forms of birth control.

State Democrats took the position that “all people should have access to affordable, safe, and legal reproductive health care, including abortion, and should not be infringed on by anyone.”

The state’s Republicans would repeal Obamacare and defund Planned Parenthood, while Democrats want “health care for all, as a fundamental human right, including Medicare / Medicaid for all.”