Over 100 advocates rallied at the state capitol Thursday to oppose a bill that would have mandated work requirements for Coloradans on Medicaid. The bill was struck down by the Senate Health and Human Services Committee in a 3-2 vote. 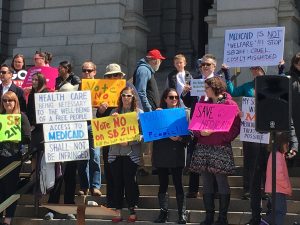 The bill required that all “able-bodied adults” be employed, seeking employment, volunteering at a non-profit, or participating in job training for at least 20 hours per week.

It also introduced a 5-year lifetime limit for Medicaid services, including for those previously exempt from such a restriction. Recipients would’ve been required to produce a monthly income verification.

“We already know the majority of Medicaid recipients work if they are able to, so this is really just a bill in search of a problem,” said Adam Fox, Director of Strategic Engagement for the Colorado Consumer Health Initiative, in a press release. “Senate Bill 214 will kick thousands of Colorado families off their health insurance and prevent vulnerable populations like kids, seniors and people with disabilities from receiving critical care. Simply put, this is just another attempt to strip health insurance away from people that need it.”

The Colorado Department of Health Care Policy and Financing found that 76 percent of nonelderly adults and children enrolled in Medicaid in Colorado live in families with at least one person who works. Most Medicaid recipients who don’t work have health conditions that keep them from working, are taking care of family members, or are students.

“Senate Bill 214 is about creating barriers to health care, not responding to them. There is absolutely no need for it. … It would create another burden on many families who are working hard to make it every single day in Colorado,” state Rep. Daneya Esgar (D-Pueblo) told the Denver Post.

According to the Center on Budget and Policy Priorities (CBPP), the coverage losses resulting from implementing these types of requirements not only reduce access to care and worsen health outcomes, but can also make it harder for many to find or keep a job. Research has not indicated that work requirements increase long-term employment or reduce poverty over time.

The CBPP also reported that those enrolled in Medicaid coverage say it makes it easier for them to look for work and perform better at their jobs.

Work requirements could lessen the state cost of Medicaid, but determining who is eligible for services based on these restrictions could increase the budget costs of administrative expenses and already overloaded tax administrative systems.

Proponents of the bill argue that people are healthier if they are employed and that employment will decrease dependency on government programs, but no long-term benefits of employment as a result of instituted work requirements have been demonstrated.