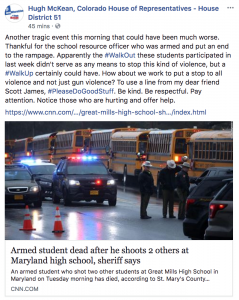 With teenagers and adults from around the country set to rally in Washington DC tomorrow for expanded gun safety laws, one Colorado lawmaker is apparently dismissing recent student activism because it wouldn’t have prevented a school shooting this week.

“Apparently, the #walkout these students participated in last week didn’t serve as any means to stop this kind of violence, but a #walkUp certainly could have,” wrote McKean on Facebook.

The “walkUp” referred to by McKean is an idea promoted by conservatives to offer help and kindness to those who appear to need it. It’s person-to-person approach, offered as an alternative to the public activism in support of policy changes that’s been undertaken by teenagers, led by students from Florida.

McKean did not immediately respond to a voicemail seeking to know if he thinks the walkout and other activism by students should be completely halted in favor of the WalkUp approach.

New laws, like those sought by student activists, could not possibly have prevented the Maryland shooting because such laws are not in place yet.

McKean: As we absorb the continuing discussion about school violence I think we all are realizing that there are not simple answers nor simple discussions. In light of recent events, I shared two posts earlier relating to this topic, posts that have been very controversial. That’s actually a good thing. The challenge that we all face, the students who walked out, the students who didn’t, teachers, parents and society as a whole, is to find a path that effectively points to a solution. Whether it is more resources in schools, more law enforcement, or more education it is a critical moment in this discussion. I recently talked to a group of students who were asking what we would do as legislators. After some discussion of the 2nd Amendment I asked how those students were dealing with adversity. I asked them how they were interacting with kids they knew were facing tough stuff, whose parents were divorcing, who had failed a class, who had a tough home life. I am determined to forward that part of this discussion, what we can do as a society, what our kids themselves can do to reach out to their classmates. As parents, what can we do to cultivate a kinder, more inclusive world? What are we doing to step in and stop bullying? What are we doing to build those relationships with our kids and their friends so that we can have those vital discussion before kids act out or friends and neighbors. Certainly we have not seen school violence limited only to students, nor have we seen it only relegated to adults. I came home very late from Denver last week. I got home after 10:00 on two nights and my teenagers hadn’t yet gone to bed. So on successive nights I called them down to the kitchen table so we could play cards for an hour or so and just talk. On Saturday, after church, we drove out to Pawnee and spend a few hours shooting clay pigeons. I don’t know what the answers are to all of this but I know that I won’t stop making my kids come down and play cards. I know that I won’t stop teaching my kids the responsible handling and ownership of firearms. I know that I won’t stop telling them to be kind to their friends and reach out to those kids who need a friend. The kids I talk to, the kids I work with on the Colorado Youth Advisory Council, they all agree that there are no quick and easy solutions. The great thing is that they are all willing to talk and work and act and so am I.

A 16-year-old student at the Maryland school died Thursday from gunshot wounds suffered on Tuesday. The shooter was killed and one student was injured and released.

“Another tragic event this morning that could have been much worse,” wrote McKean on Facebook. “Thankful for a school resource officer who was armed and put an end to the rampage. Apparently, the #walkout these students participated in last week didn’t serve as any means to stop this kind of violence, but a #walkUp certainly could have. How about we work to put a stop to all violence and not just gun violence. To use a line from my dear friend Scott James, #PleaseDoGoodStuff. Be kind. Be respectful. Pay attention. Notice those who are hurting and offer help.”