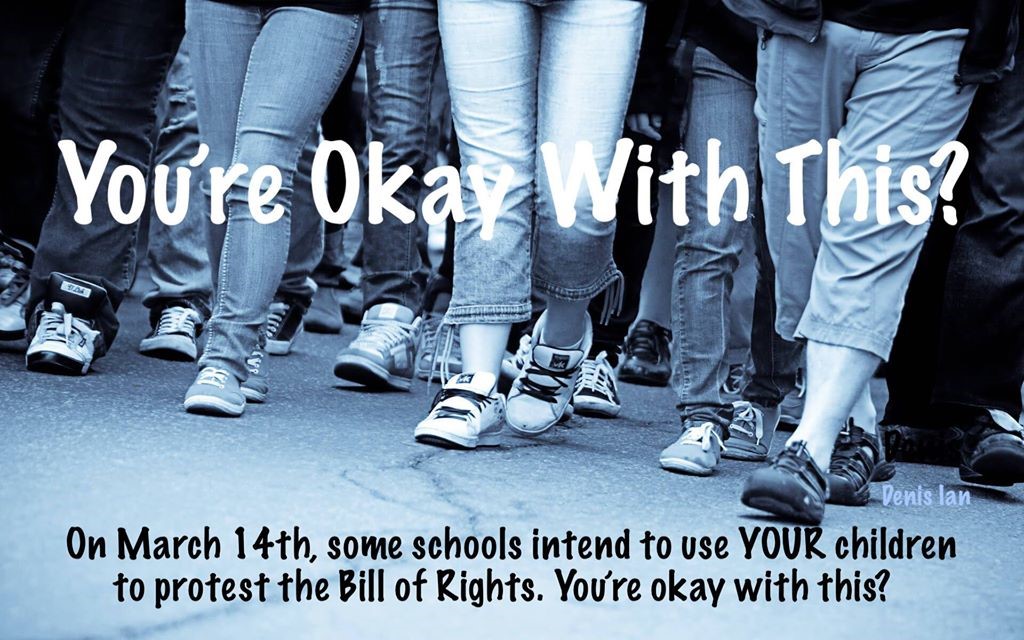 Last month, after students from Parkland, Florida began speaking out for gun safety laws in the wake of a massacre at their high school, Denver conservative radio host Randy Corporon went on the attack, calling the students “manipulated damaged children” and “brainwashed Florida teenagers” and accusing “the left” of “seizing on this tragedy and weaponizing these children against the rights of fellow American citizens, and against a political party, and against an organization like the NRA.”

“[The students] have no idea what they are doing,” said KNUS 710-AM Corporon on air Feb. 20. “They’re being manipulated by these leftists. This is the war for our civilization that I talk about.”

“It is their teachers. It is the leftists that are in their lives, could be their parents…

With students across Colorado set to walk out of class tomorrow to support of Florida teenagers and advocate for gun safety laws, I asked Corporon if he stood behind these comments–or if he’d changed his mind, or possibly tempered it, after seeing how the students, many of whom studied debate in school, have organized themselves and expressed their views.

“No, I don’t feel any differently about it than I did at the time, and you can re-quote me and re-affirm what I said,”  Corporon told me, adding that he still opposes tomorrow’s walk out, in part because “we’re just making kids targets with no protection whatsoever. “If my kids were in school still, they would not be participating in any walk out. That’s for sure.”

Multiple Colorado conservatives have lashed out at Wednesday’s planned student walk out.

“My guess is that there are millions of kids like these Billings High students who aren’t being coached or organized by the alt-left,” wrote former U.S. Rep. Tom Tancredo, a Republican, on Facebook, referring to students who were vocalizing their plan to stay in school. “At least we can hope there are still teachers out there somewhere who have actually taught kids to think critically.

“The right to protest and the right to un-infringed gun ownership are both protected by the same Bill of Rights,” wrote McIntire, a Republican, on Facebook. “Which means tomorrow, some individuals will be using their constitutional right to advocate for the removal of someone else’s constitutional right. That doesn’t seem right to me.”

Former Jefferson County School Board member Julie Williams, a well-known Colorado conservative, posted the meme pictured above on Facebook this week, writing that she’s “not okay” with the walk out.

Another Colorado talk radio host and former GOP congressional candidate Jeff Crank wrote on Facebook, “What will school boards around America do when students stage a walkout for prayer if administrators do nothing when they walk out for politics tomorrow? The First Amendment applies to all.”

Corporon would crack down on schools and stop any protests Wednesday.

“Parents with kids in these schools should tell their kids, ‘Under no circumstances do you walk out that door and get into this march. You should be in school.’ And they should be raising holy hell with the school principals and the school administrators,” Corporon said on air Feb. 20.

I told Corporon that I have a teenager at East High, and if I told her not to walk out, she would do it anyway. Do you feel like you can actually exert that kind of control over a teenager with a mind of her own, I asked Corporon.

His response: “Oh, absolutely. Yeah, I didn’t get into power struggles with my kids. We had a real mutual respect. And part of that was, I would always hear them out. But while they were living at my home, decisions that I made applied to them We really never had a problem with it. And they are both very good and independent thinkers. I get teenagers. They are tough.”

In December, Corporon served as the lawyer for State Rep. Lori Saine (R-Firestone), who was arrested after her gun set off alarms at a Denver International Airport.

“Well, I would hope more people would feel sorry for her for forgetting she had [the loaded gun] and being in custody here [in jail] for going on 30 hours,” Corporon told a reporter.

Listen below to excerpts of KNUS 710-AM radio host Randy Corporon, guest hosting for Stephan Tubbs, on Feb. 20.