The 2018 Conservative Political Action Conference kicked off today in Maryland. It features a lengthy list of speakers and panels, including NRA President Wayne LaPierre, Education Secretary Betsy DeVos and Vice President Mike Pence. You can watch the livestream here. Coloradans, though, may be more interested in tomorrow’s program, which not only features former Congressman Bob Beauprez interviewing two Trump cabinet members, but also two live events taking place locally at Lakewood’s Colorado Christian University. Tickets for the Friday events at CCU are available here. Here’s a rundown of all the Colorado-related events:

A Conversation with Secretary of Energy Rick Perry and Secretary Ryan Zinke, interviewed by former U. S. Rep. Bob Beauprez

Former CD7 Representative, twice-failed GOP gubernatorial candidate, conservative blogger and occasional right-wing radio host Bob Beauprez will interview two powerful members of President Trump’s cabinet: Energy Secretary Rick Perry and Secretary of the Interior Ryan Zinke. No specific topics are listed, but issues such as fracking, the oil & gas industry and public land management are safe bets. If a discussion of federal vs. state responsibility for public land does occur, it’s always possible that Beauprez will reiterate his support for the failed “Northern Colorado” secession movement launched by conservative activists in 2013. It’s also possible that Beauprez will raise his fears of “creeping Sharia” with Secretary Perry, who has been accused by fellow CPAC speaker* Pam Geller of being overly friendly with Texas Muslims.

Michelle Malkin: “A Time for Action,” Live from the Colorado CPAC Stage

It’s unclear what specific action Michelle Malkin will advocate for during her ten-minute speech, but a review of her past positions and statements reveals some possibilities. She may suggest placing Muslim-Americans in internment camps, which she justified in her 2004 book, “In Defense of Internment: The Case for “Racial Profiling” in World War II and the War on Terror.” 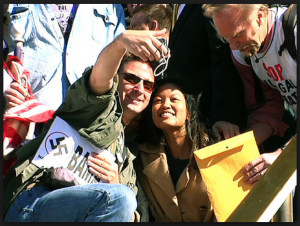 She may call for Americans to mock the suicides of prisoners at Guantanamo Bay, as she did in 2006, shocking her interviewer, Bill O’Reilly.  Perhaps she’ll pose for selfies with those who believe President Obama was a Nazi, as she did in this picture, taken at the Colorado state capitol in 2009.

Pot or Not?: A Debate on Marijuana Legalization From the Colorado CPAC Stage

Traditional Anti-choice and anti-LGBT viewpoints will still have a representative in American Principles Project director Terry Schilling, who is making opening and closing remarks. APP’s mission statement includes the following: “we educate and advocate for public policy solutions that respect and affirm: human life from conception to natural death; the union of one man and one woman as the definition of marriage; the freedom to practice and proclaim religion…” The panel will be moderated by longtime Colorado radio personality Stephan Tubbs, now a conservative talk show host on KNUS 710. Tubbs was recently profiled by the Colorado Times Recorder’s Jason Salzman. If you can’t attend the event live on Friday, you can see the recorded broadcast on the Saturday CPAC livestream.

You can find the rest of the CPAC agenda here, and tomorrow’s livestream can be found here.