by
Madeleine Schmidt
posted on
February 1, 2018

The Colorado Springs-based anti-abortion organization Save the Storks is trumpeting a remodel of one of their mobile “pregnancy centers,” which offer free services including ultrasounds and pregnancy tests out of vans parked outside strategic locations like abortion clinics and college campuses.

The new so-called “wrap” features an Instagram-worthy photo of an adventurous looking young woman smiling and gazing out over a mountain landscape, and it’s all part of Save the Storks’ marketing scheme to appeal to Millennials who might be pregnant and considering abortion. 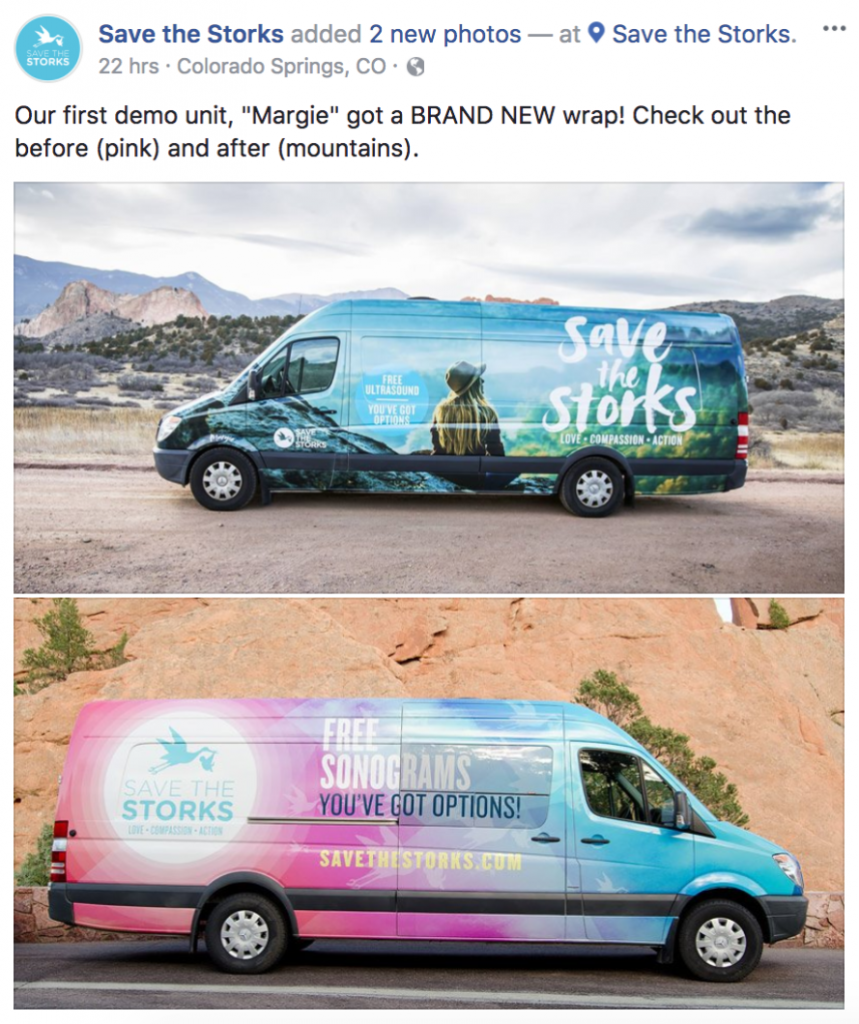 It’s a thinly-veiled attempt at masking their mission of preventing as many abortions as possible, often by misleading and guilt-tripping women.

“Save the Storks has a trendy, relevant marketing approach that appeals to young women,” Johnson is quoted as saying. “Every pro-life organization in this country should strive to better connect with the demographic they are trying to reach. Save the Storks has done just that.”

And why the vans?

As Save the Storks states on its website, “going mobile is a proven method to reach women contemplating abortion, as many of them have never heard of pregnancy centers or the resources offered there.”

Women who have heard of Crisis Pregnancy Centers (CPCs) might be driven away by the fact that they’re known for doing or saying anything to convince pregnant women that abortion is the very worst of their options.

This often includes telling women that abortion is risky, both in terms of physical and mental health. CPCs often list breast cancer and mental health problems as potential side effects of abortion, despite the lack of evidence to support those claims.

On the contrary, studies have shown having an abortion is actually safer than giving birth, and there’s no evidence that having an abortion causes mental health problems, like suicidal thoughts and depression, as many CPCs claim. And, in fact, a 2016 study showed that psychological symptoms increased only in women who sought abortions but were unable to have the procedure.

The van pictured here bears the name “Margie”. All the vans have names, some with human ones like “Kathy,” “Emily,” and “Linda,” and others with inspirational ones like “Hope,” “Compassion,” and “Courage”.

It’s not completely clear why the vans have names, but it seems a safe assumption that it’s all part of Save the Storks’ mission to make the vans seem as non-threatening as possible.

Afterall, they’re up against universal wisdom that you shouldn’t approach a van full of strangers offering free stuff.

The vans also tend to bear the phrase “you’ve got options,” which sounds like something you might expect to see at Planned Parenthood, but for Save the Storks, it has a much different meaning: namely, that there are options other than abortion, as if having a baby wasn’t an inherently obvious outcome of a pregnancy, and women weren’t aware of this fact.

And why the free ultrasounds?

Ultrasounds have long been a key tactic in the anti-choice playbook in Colorado and across the country. Conservatives have repeatedly pushed policy proposals that would require pregnant women to have ultrasounds prior to an abortion, the thought being that if forced to view an image of the fetus, the woman will change her mind and carry the pregnancy to term. It’s just one way CPCs guilt trip women.

But despite the numerous alarming reports about CPCs, ultrasound vans have recently received favorable coverage in local Colorado papers. Both the Pueblo Chieftain and the Cañon City Daily Record heralded a new ultrasound van in the area as a “mobile medical unit” in nearly identical reports, with hardly any mention of the anti-abortion agenda of the pregnancy centers behind the vans.

And Save the Storks’ marketing strategy doesn’t stop with the Stork buses. The organization also has a consulting operation, called StorkWorks, to help CPCs around the country revamp their social media and marketing operation to better reach so-called “abortion vulnerable” women and appeal to young people.

They currently have a webpage devoted to StorkWorks marketing, which says it’s “still in process.”

Save the Storks didn’t respond to a request for comment.