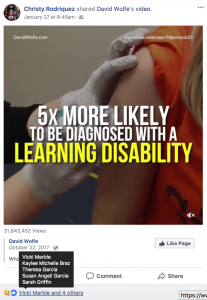 State Sen. Vicki Marble of Ft. Collins “liked” a recent Facebook meme depicting a woman getting a shot along with the statement, “5x MORE LIKELY to be diagnosed with a LEARNING DISABILITY.”

The image on the post comes from a YouTube video on how to administer a “flu vaccine.”

There are remote dangers associated with getting a flu shot, which are far outweighed by the potential benefits, according to the overwhelming consensus of scientific opinion.

Yet, each year, Facebook and social media sites become sickened with falsehoods linking the flu vaccine to various maladies. Snopes, along with other credible sources, have found these to be false, while acknowledging the remote risks.

There is no factual basis for the assertion that you are more likely to be diagnosed with a birth defect after getting a flu shot, much less “5x MORE LIKELY.”

Marble: A “Like” on FB to many people, including myself, means “Thanks for the information” or “Thanks for posting”. There are things on FB I do not like reading, but, it gave me heads up on a subject I may not have been aware of. Perhaps it gave a different look into the other side of the debate. I appreciate that. It’s pretty simple. Tweets/Blogs/FB/social media are where people voice opinions on events, other people, or, whatever they feel important. It isn’t considered investigative reporting. It may serve to perk the interest of the person reading the social media post to do more in depth research of the subject. That is a purpose served.

Told that “liking” a Facebook post promotes it, even discredited information like this, Marble wrote, “If more options were important to people perhaps Facebook would offer them. This doesn’t seem to be something the public is concerned, or cares, about. It is social media.”

Marble said she does not have a position on the flu vaccine.

“Regarding flu vaccines, there is more to learn,” she wrote. “I have no stance one way or the other about the flu vaccine at this point. I respect a parent’s choice on the issue of vaccinations.”

The Republican lawmaker once sponsored legislation affirming that parents can opt their children out of recommended vaccines in Colorado.

Marble’s comments on health issues have draw attention in the past.

Marble made national news last year for her dismissive response to a cub scout who asked Marble why she’d said that African-Americans suffer from poor health because they eat so much fried chicken.

Back in 2014, Marble asserted that immigrants bring previously eradicated diseases to the United States. She never provided evidence supporting this mean falsehood.

Updated on Feb. 8 with further response from Marble.