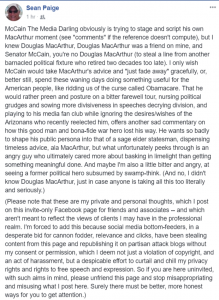 Those quotes, which I included in recent blog posts, come from the personal Facebook page of Colorado Senate GOP spokesperson Sean Paige.

No doubt Paige does not want me to quote his polite request to stop quoting his Facebook material, but here I go anyway:

Paige: “Please note that these are my private and personal thoughts, which I post on this invite-only Facebook page for friends and associates–and which aren’t meant to reflect the views of clients I may have in the professional realm. I’m forced to add this because social media bottom-feeders, in a desperate bid for cannon fodder, relevance and clicks, have been stealing content from this page and republishing it on partisan attack blogs without my consent or permission, which I deem not just a violation of copright and an act of harassment, but a despicable effort to curtail and chill my privacy rights and rights to free speech and expression. So if you are here uninvited, with such aims in mind, please unfriend this page and stop misappropriating and misusing what I post here. Surely there must be better, more honest ways for you to get attention.)” (emphasis added)

When Paige complained on Twitter a few months ago about my quoting his Facebook posts, I responded by asking him if he thought Clinton’s private emails were out of bounds or Obama’s comments about Pennsylvanians who cling to their guns. Or Rep. Mike Coffman’s (R-CO) comment that he was unsure if Obama was an American in his heart.

Paige didn’t respond, but he’s gotta know, as a spokesman for politicians, how journalism and public debate works. Private information gets out. If it’s verifiable and relevant, it gets published. Trump gets mad, but that’s life.

You sympathize with politicians and people like Paige who are scrutinized, but it’s tough to keep your thoughts private these days, especially when you blast them out at private fundraisers or post them on your personal Facebook page, which has hundreds of friends.

But now Paige, who did not immediately return a call for comment, is taking a different tack, with new accusations about people who quote his stuff:

An act of “harassment.” Not. It’s closer to bearing witness. In my case, I just quote him and try to explain it or challenge it.

“Curtail and chill” his privacy rights and rights to free speech and expression. Nope. I’m interested in debating him freely and letting his speech blossom into the sunlight.

“Violation” of his copyright. Again, no. Sharing is the way of social media, but Paige actually has an important point that copyright protections exist. But, per fair-use standards, you’re allowed to reproduce portions of copyrighted material for criticism and commentary. So my selective quoting of his Facebook page is ok.

If Paige is serious about trying to keep his stuff personal, he should de-friend all his Facebook friends, except the ones who won’t pass on his posts to me or others. But the person who shares my Facebook posts the most is my mother! She even prints them out and puts them on her fridge for all to see! So if I were Paige, I’d have a hard time keeping my posts under wraps. I mean, I’d never de-friend mom.