Kaiser Workers to Vote on Whether to Strike 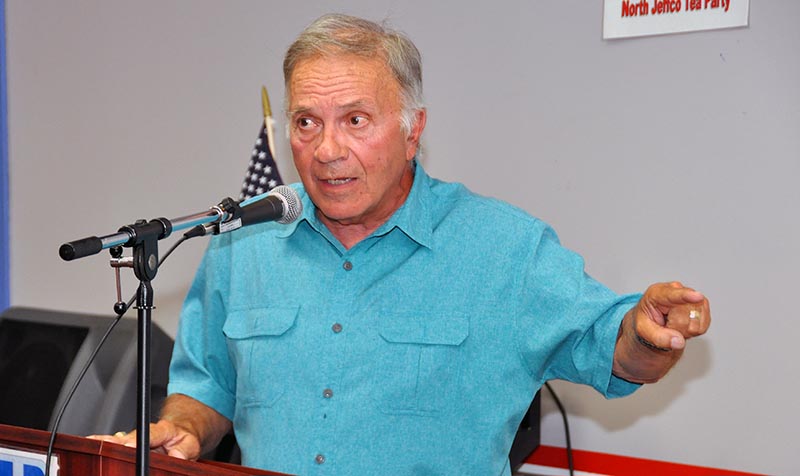 Here’s a glimpse of some of Tancredo’s key characteristics, as shown through his Facebook posts:

Tancredo promoted the conspiracy theory that the Clintons have murdered several people associated with the Democratic National Committee, including Seth Rich, about whom Fox News published a completely baseless story that was eventually retracted. 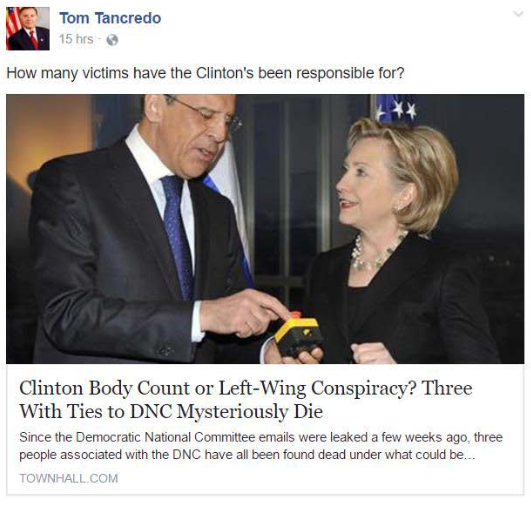 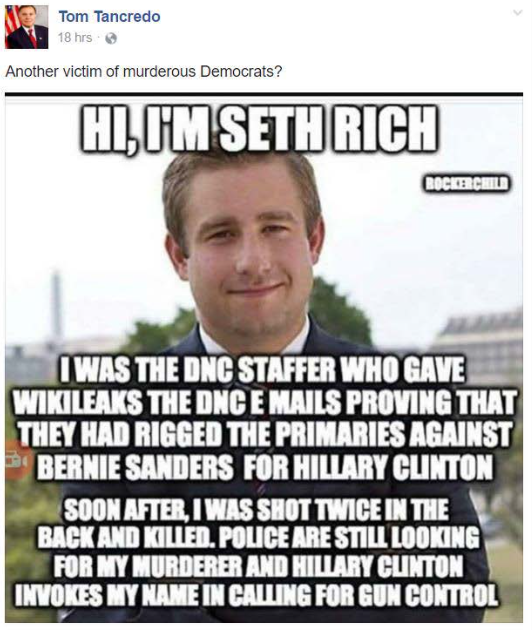 Tancredo was all in on Trump’s claim that Obama wiretapped him during the election, despite the utter lack of evidence. 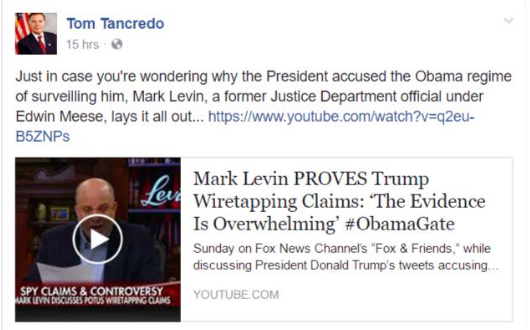 More recently, Tancredo posted a fake photo of Obama giving awards to Harvey Weinstein and other Democrats who have been accused of sexual assault. He removed it after being notified that it was fake. 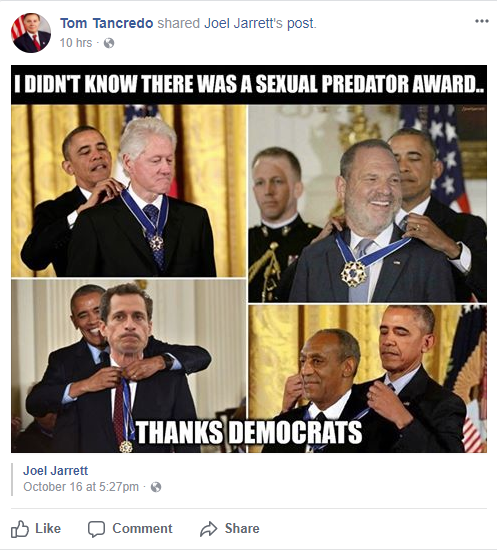 Tancredo is perhaps most well-known for his extreme anti-immigration stance, an issue that has propelled his previous campaigns. Last week he posted an old campaign video to Facebook in which he warns against “Islamic terrorists” who he says “freely roam U.S. soil” by juxtaposing clips of wounded children being carried away from terror attacks abroad with foreboding footage of children running around what appears to be Denver’s Cherry Creek mall.

My campaign team likes this video so much they wanted me to post it again.If you agree that it's time that we secure our country from those who wish to harm us, please donate to my campaign for Governor. >>> TancredoForColorado.com/Give

Here, he directs Immigration and Customs Enforcement to an immigrant-friendly restaurant. 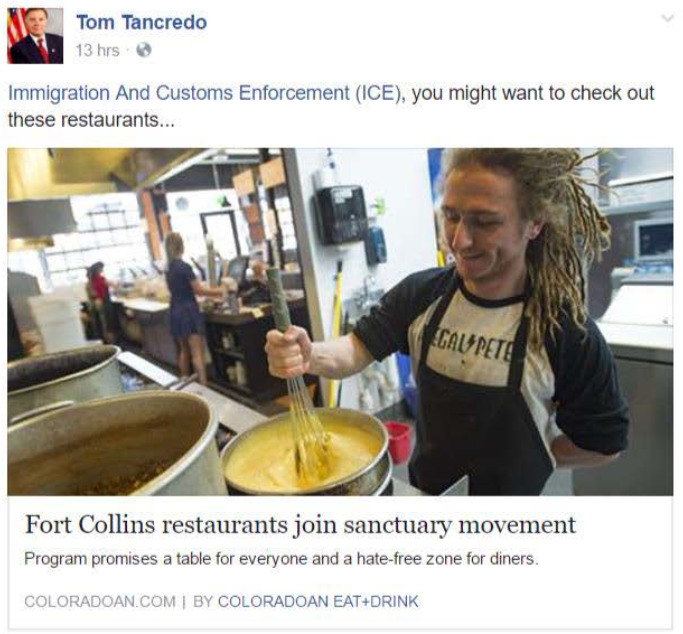 He expressed his displeasure that churches are offering sanctuary to undocumented immigrants. 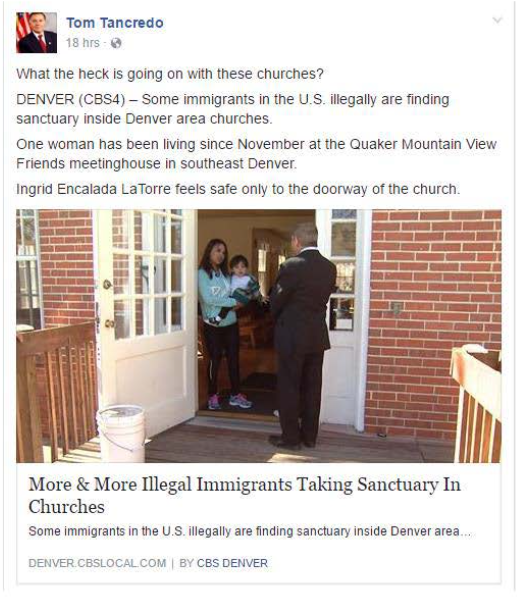 When it comes to the issue of so-called “Dreamers”, or immigrants brought to the U.S. as children who are temporarily protected from deportation under the Deferred Actions for Childhood Arrivals (DACA) program, Tancredo is no less harsh. When U.S. Rep. Jared Polis (D-CO) brought a Dreamer to Congress, Tancredo called the young man a “criminal,” despite the fact that he’s objectively not a criminal. 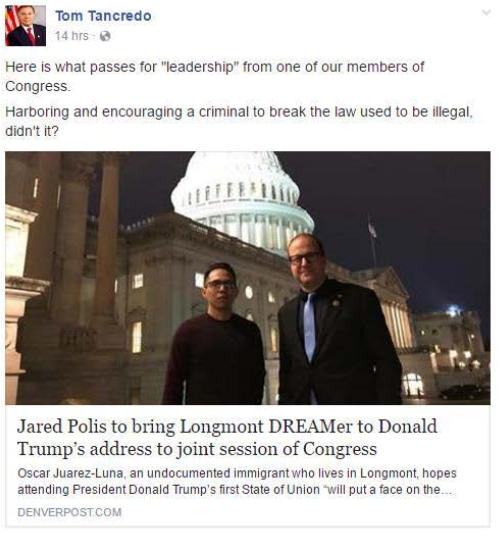 Following the 2015 shooting in Chattanooga, Tennessee, Tancredo advocated in a Breitbart article for stopping all Muslims from entering the country and expressed excitement that Trump apparently agreed with him following the instatement of Trump’s travel ban. 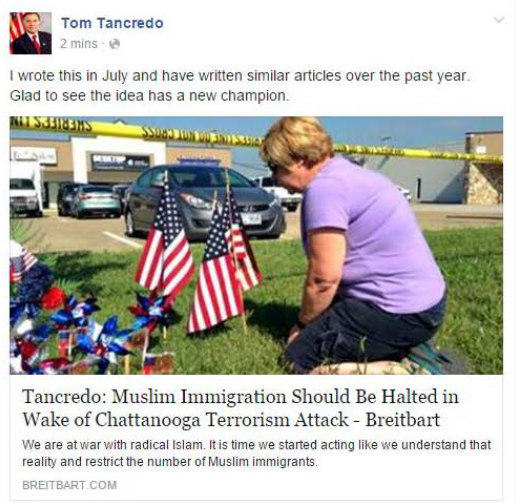 Tancredo repeatedly expresses concern for preserving “the culture and the future of western civilization”. 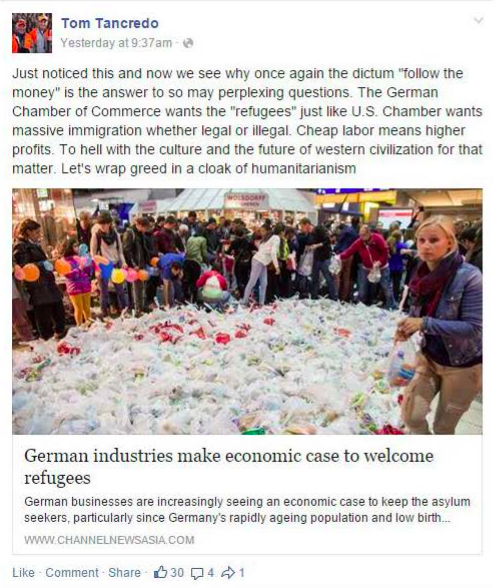 But he insists that wanting to preserve “American Culture” isn’t racist, despite the fact that for Tancredo, preserving American culture means keeping non-whites out. 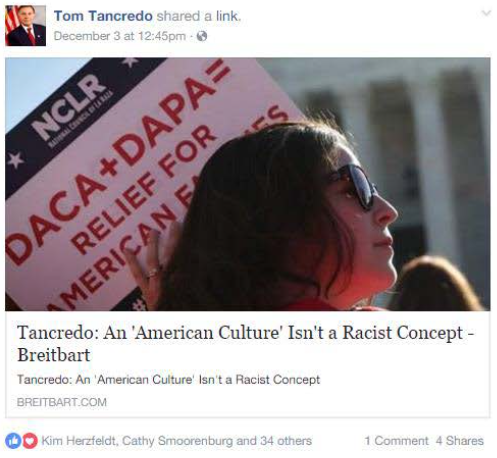 He harbors an extreme disdain for Muslims

For Tancredo, Islam is enemy number one, and tolerance of Muslims amounts to western civilization “committing suicide”. 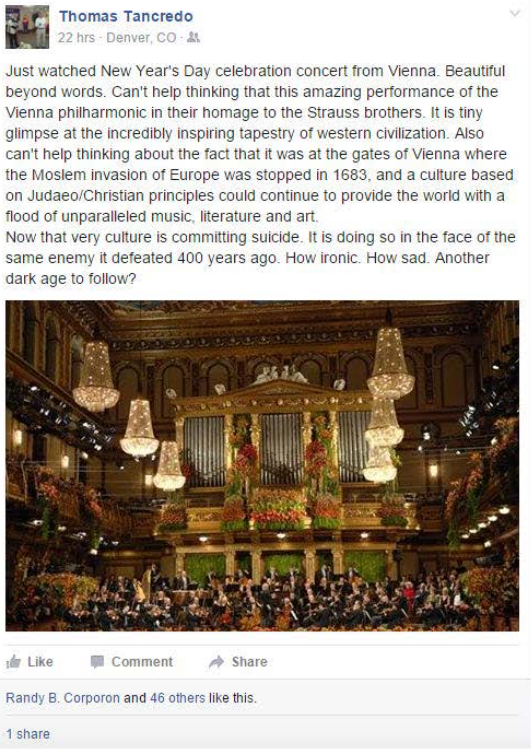 He bemoaned having to be interviewed by a Muslim woman, but then expressed surprise that she turned out to be “very nice.” 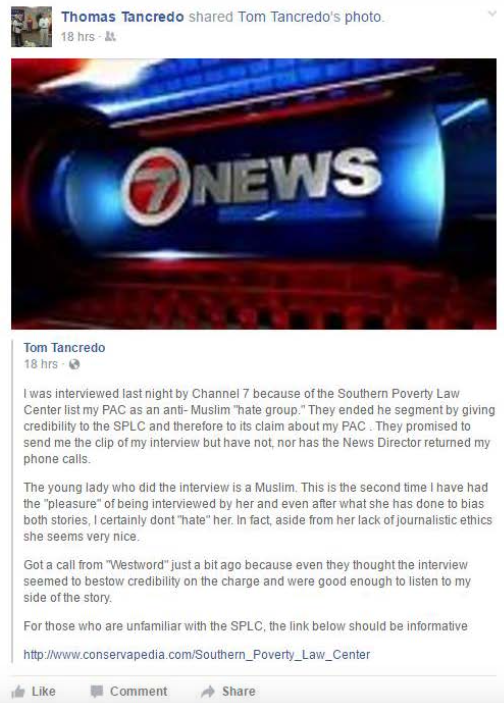 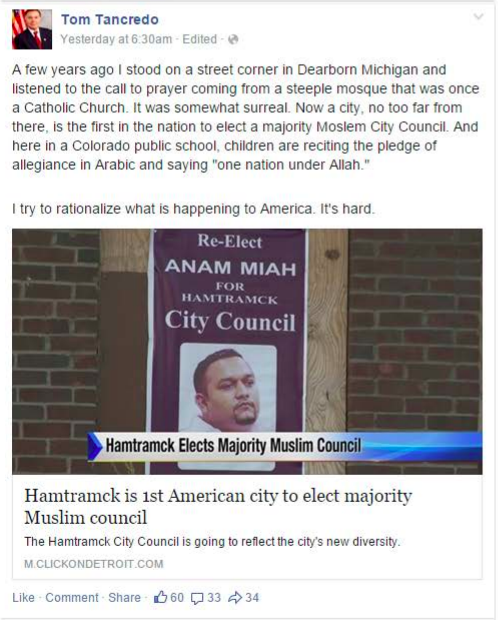 Like many of his conservative cohorts, he jumps at every possible chance to criticize political activist and Women’s March organizer Linda Sarsour, who’s a Muslim. The claim that she’s an anti-Semite is completely unsubstantiated. 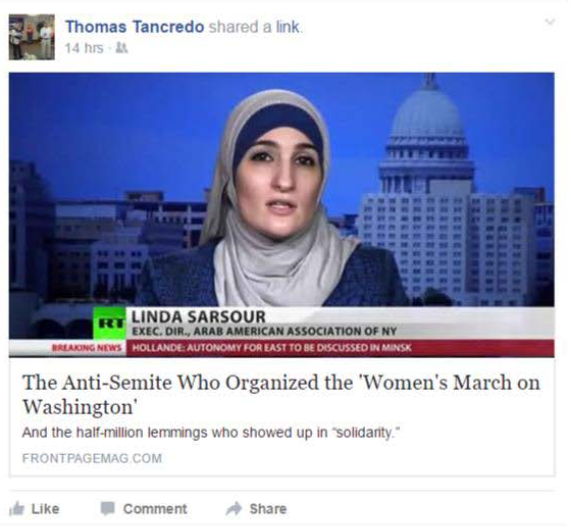 Tancredo first hinted at joining the gubernatorial race back in August, spurred by his anger at state Republicans for not speaking up after a Colorado Springs resort canceled the white nationalist conference at which he was scheduled to speak.

Then, in September, he met with former Trump strategist Steve Bannon, who’s been recruiting candidates nationwide who will support a nationalist, populist agenda.

In spite of the fact that Colorado rejected trumpism in the Republican presidential primary, and his 0-2 gubernatorial campaign record, Tancredo is apparently confident that he can win. He told Breitbart that “things look good” for him, citing private polling that shows he’s ahead of all his Republican challengers and tied with Democratic candidate Jared Polis.