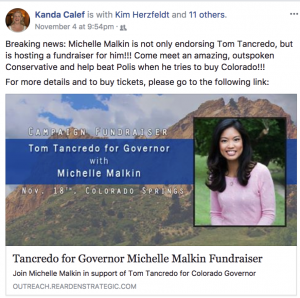 On Wednesday, Conservative activist Kanda Calef posted an invitation to a Nov. 18 Tancredo fundraiser, with Michelle Malkin, with the comment:

Breaking News: Not only is Michelle Malkin endorsing Tom Tancredo, but is hosting a fundraiser for him!!!

Malkin’s Twitter feed has been boosting Tancredo of late, and Calef’s post cited Rearden Strategic, which is assisting Trancredo.

Malkin, who resides in Colorado Springs, is widely known to share Tancredo’s hardline views on immigration and guns, among other issues, often spreading misinformation along the way.

In a 2014 column about Tancredo, Malkin wrote:

Malkin: And he’s got all the right enemies. What sets Tom apart is his lifelong independence and his proven record of bucking establishment politics. Nobody ever will accuse him of straddling the fence, sugarcoating his message or selling out. No wonder the powers that be in the bipartisan halls of power are scared.

In 2014, when Malkin endorsed Tancredo’s gubernatorial run, she called him “a principled, proven public leader committed to individual and economic liberty and our national sovereignty.”

When Tancredo ran for governor in 2010, Malkin was reportedly under consideration as a running mate.